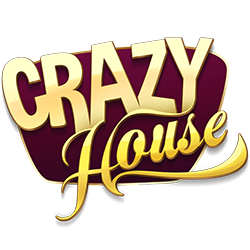 The provably fair, non-traditional blockchain casino Fairness meets fun Crazy House was built on a foundation of providing fun, easy-to-understand, provably fair games. Each game has a unique spin on concept of "provable fairness", guaranteeing a house edge of only 1%. Everything else is up to the player. Achieving true randomness Multipliers are seeded through the blockchain and every round played has a corresponding hash for verification. All players are guaranteed that the multipliers were obtained before the game began and are not tampered with to give the house a higher edge. Blockchain-powered records keeping Upon full launch of the site, Crazy House requires that users map their account data to a cryptocurrency wallet app, ensuring that even their in-game chip currency is kept on the blockchain. Users who'd rather not do this can still play, too -- but they won't be able to save any of their winnings Transparency Games are clearly explained to the player, and records are kept of each game and the players's performance in each game they play. Leaderboard data is kept up-to-date. Crazy House does not have hidden transaction fees when users withdraw funds to their wallet.