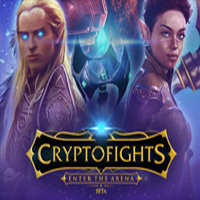 At its core CryptoFights is a 1vs1 turn based fighting game. Imagine a turn based street fighter but with weapons and armor that you can change to out match your opponent. New players start as a low level fighter and must win matches to earn XP and gold. XP can then be used to level up their fighter making them stronger with more ability points to allocate. Gold can be used to buy new weapons and armor from the marketplace to give your fighter the edge it needs. As your fighter levels up you will enter new arenas to battle, getting you higher level rewards. Fighting a match is heavily based on dice rolls to introduce some element of luck and randomness to both players. The first round there is an initiative roll to see who goes first. After that the rounds go like this. ATTACK ROLL This roll is to see if you land a hit on your opponent. DAMAGE ROLL This roll is to see how much damage you cause. CRITICAL HITS This happens when you roll a 20 on the attack roll. You get to roll the damage roll twice for double damage. Players can equip on both hands, so they can duel wield or use a sword and shield. Certain weapons cause specific damage that can be mitigated by the opponents armor choice. For example daggers causing piercing damage while mauls cause bludeging damage. A fighter with high agility has a higher chance to dodge the attack also. Players have to strategize on how to customize their fighter before battling it out with other players. This causes deep strategy on what items to buy, how to configure their fighter, and who to challenge. We are also introducing on the first release special weapon and armor properties such as poison or flame damage as well as special defense abilities of armor. We plan on having many items released via generations. First generation will be the presale.