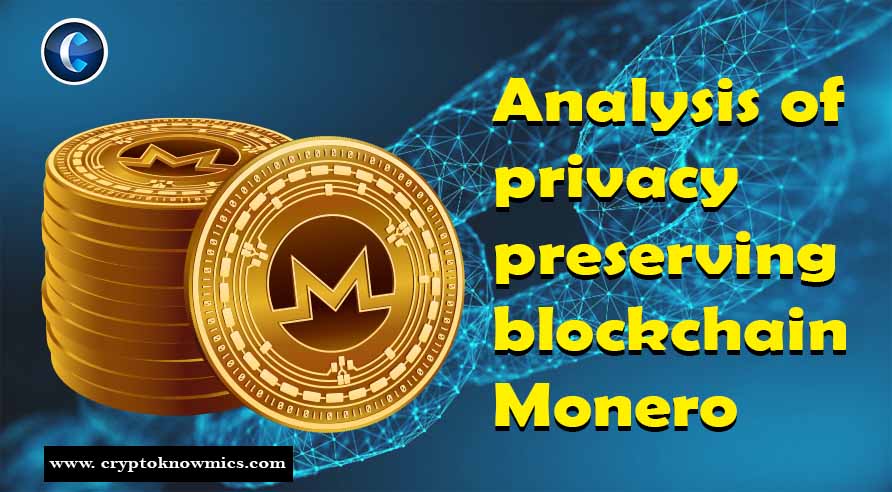 Blockchain is a public ledger with its transactions available for verification by anyone in the network. Their ledgers are transparent and open for public view. Blockchains are supposed to provide anonymity so that the user addresses cannot be linked to real-world identities.

Among all the public blockchains, Monero is a private digital currency working on a privacy-preserving blockchain. It was created in 2014 and originally known as BitMonero, as a derivative of a proof-of-concept currency, CryptoNote. It uses privacy-enhancing technologies to provide anonymity for its users. Furthermore, it creates confidential and untraceable transactions. Anonymity is provided by default to all its users. It hides sender and receiver addresses and the amount involved in a transaction.

A new feature called atomic swap is coming on Monero soon which would provide trade between Bitcoin and Monero without the need to trust any party. With a steady increase in its trading volume, Monero (XMR) is currently trading at $394. In April, a Monero based DEX, called Haveno, was launched for trading XMR for fiat and cryptocurrencies.

We will analyze how Monero is different from other digital cryptocurrencies in the following sections.

How Monero Blockchain Can Help Privacy Issues in Blockchain

Third parties like a central authority have been let go to achieve decentralization in governing a digital currency. Now to verify any exchange between parties, its complete transaction history must be publicly visible. Most blockchains store transactions in clear text to facilitate verification by community users. Here an open ledger defies the privacy of its users by publicizing their complete history. To address this lack of privacy, Bitcoin users can obfuscate their identity by the use of temporary intermediate addresses for each transaction. However, it is still possible to analyze money flows and link these addresses. Many other analyses are still possible like finding network topology, studying transaction patterns, linking senders with receivers. The transparency makes such currencies pseudo-anonymous.

Also, financial confidentiality is not available in most blockchains. The transaction amount for each exchange is publicly visible. High volume transactions can attract attackers in attempts to steal their currency. There is insufficient financial privacy for any commercial and personal transactions.

How Does Monero Blockchain Help?

Monero is a cryptocurrency built with the sole purpose to provide censorship resistance and user privacy otherwise insufficient in other digital currencies. It uses powerful cryptographic techniques. It allows parties to interact without revealing the sender, receiver, or transaction amount. Even without actually knowing the transaction amount or account balances, the participants in the network can assess the validity of the transaction.  One can think of Monero as an opaque blockchain providing all the benefits of a decentralized and trustless cryptocurrency without risking the privacy of its users.

It provides a solution to address the privacy issue by storing only stealth, single-use addresses in the blockchain, it also uses ring signatures for authenticating transactions, thus confiscating user identity. This reduces the chance of an observer to find the origin of funds among the users and find any link between the parties of a transaction. Monero also uses confidential transactions in which transaction amounts are concealed behind cryptographic constructions without revealing the value itself.

To provide a great deal of opacity to the users Monero makes use of the following cryptographic features:

Uses and Market of Monero

Monero works on several exchanges and is accepted by many merchants. A lot of Monero has been recently on the move. The project has recently celebrated its 7th anniversary and is currently on a high ride. It attracts special users which prefer privacy and confidentiality for their transactions. But owing to its upcoming features of atomic swaps and bulletproofs, Monero is expected to be the mainline cryptocurrency.