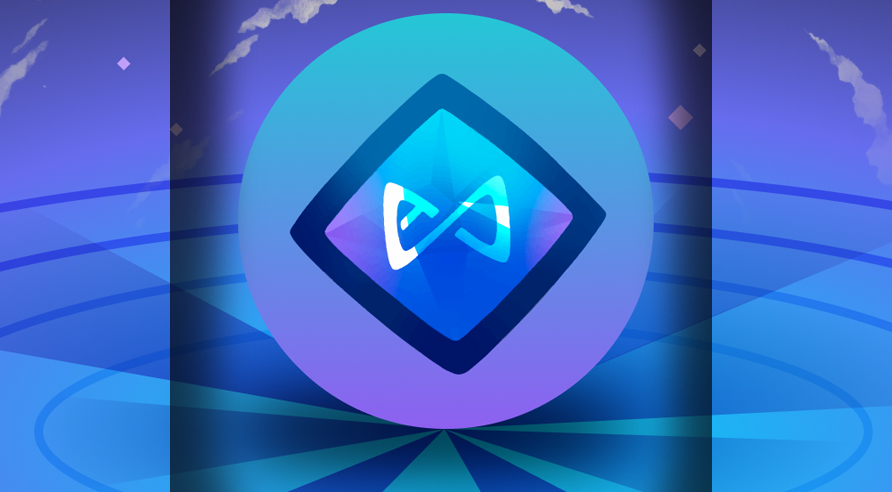 Cryptocurrencies have proven to be extraordinarily durable in the face of such economic meltdowns. Fortunately, the fast expansion of worldwide high-speed internet access and digitization has provided an ideal environment for digital currency. Blockchain inventors are riding the tailwinds of a $1.4 trillion global crypto-industry.

The current cryptocurrency market fall should be regarded as a small blip. Bitcoin is a store of value and should be considered as an asset class with long-term growth prospects. Price corrections are a natural feature of every asset class, and cryptocurrencies are no exception.

Non-Fungible Tokens (NFTs) have also gained as a class asset over the past year. NFTs appear to be a natural evolution in the growth of asset tokenization, of all kinds of things we value, reviving the blockchain movement initiated by Bitcoin, followed by smart contract platform Ethereum. Furthermore, NFTs enable producers to create unique and finite tokenized copies of digital creative works and commodify them, all while assuring that the work cannot be lost or destroyed and remains scarce online. NFTs, address the issue of uniqueness by providing a one-of-a-kind asset category. Moreover, NFTs have skyrocketed in popularity in recent months, and the numbers are staggering. Jack Dorsey, for example, sold his first tweet for $2.9 million.

And with that, one of the many rising NFT tokens is Avie Infinity (AXS). Axie Infinity is a blockchain-based trade and battle game in which participants own and run a portion of the company. Axie Infinity Shards (AKS) is the unique governance token for the Axie Infinity ecosystem. The token is currently trading at $3.80, and holds a global market cap of $231 million, at the time of writing. The token has shown significant growth. Its price was just $0.51 at the beginning of the year. 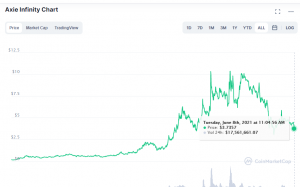 What Is Axie Infinity (AXS)?

Axie Infinity is a distributed ledger technology (DLT) game and environment based on the Ethereum blockchain. Its original cryptocurrency is the Axie Infinity Shard ERC-20 token (AXS). Since 2018, Axie Infinity has been evolving as an Ethereum-based collecting game. The game was created by Sky Mavis, a Vietnam-based firm that began as a passion project before evolving into a popular Ethereum game. Axie Infinity is a game that allows players to collect, breed, raise, combat, and trade token-based animals known as Axies. It was inspired by famous games like Pokémon and Tamagotchi.

Axies are the gaming characters in the Axie Infinity ecosystem. They’re non-fungible tokens that you control and own. You can keep them in your crypto wallet, send them to other Ethereum addresses, or exchange them in a blockchain-based marketplace with other players. Axies aren’t the only ERC-721 tokens in the game; there’s also virtual land and stuff.

With a high Axie price and hefty gas prices on Ethereum, getting started is difficult for new players. Breeding necessitates the use of gas, which can quickly pile up to a significant amount of ether. The Ronin Ethereum sidechain, which was created exclusively for Axie Infinity, will undoubtedly help to solve this problem.

How Does Axie Infinity Work?

Axie Infinity aspires to be a mature game with a vibrant environment, and strong community. Each Axie is equipped with six of the hundreds of possible body parts, each with its fight move. This results in an almost infinite variety of Axies, with the majority having very low numbers and those with the strongest combination of body parts having fantastic stats. Each Axie is NFT with unique attributes and strengths that can be utilized in 3v3 combat. The winning team earns more experience (exp) points, which can be used to improve Axie’s stats or evolve their bodily parts.

To help manage the population of Axies, each Axie can only be bred seven times, unlike some other blockchain-based battling and breeding games. Axie Infinity features its own mating hub to assist players in finding a suitable partner with whom to breed their Axie to increase their chances of generating a rare or strong progeny. To breed Axies, you’ll need 0.005 ETH and Small Love Potion (SLP) tokens.

Axie Infinity allows players to earn both AXS and SLP tokens through a variety of methods. After that, the tokens can be traded for other cryptocurrencies. Axie Infinity has already shown to be profitable for several gamers.

What is the Axie Infinity Shards (AXS) Token?

The AXS coin is a new addition to the Axie Infinity world, having been released in November 2020. Holders of AXS will be able to stake the token and earn AXS by voting and playing. The Community Treasury, which is replenished via in-game purchases, provides these prizes. This Community Treasury, as well as the staking functions, have not yet been deployed as of January 2021.

AXS will have a total supply of 270,000,000 units. Some tokens were set out for public sale, while others were reserved for Sky Mavis and the project’s advisors. At the first public sale, the initial supply was just under 60,000,000. The total number of tokens issued is scheduled to increase every year until 2026. Stakeholders of AXS tokens will soon be able to obtain regular payouts by staking their tokens. Unlike some other stackable assets, however, AXS holders will have to vote and play to receive their rewards. If you would like to know where to buy Axie Infinity, the top exchanges for trading in Axie Infinity are currently Binance, Huobi Global, FTX, Upbit, and Gate.io.

READ  Binance All Set to Launch its Own NFT Marketplace

Review of Axie Infinity Token in 2020

The coin, not even a year old so there is not much of a history to this token. However, the first quarter of 2021, has been significant growth for the coin. With the rising popularity of the NFT market, the token is also snatching the attention of the traders. The price of the token is expected to touch milestones in the future.

This is because, with the game’s growing popularity and the Ethereum network’s high transaction costs, the cost of joining Axie has skyrocketed. In mid-2020, a team of three Axies – Pokémon-inspired NFT pets whose owners compete against other Axies for the chance to receive SLP as a prize — cost only $5. A decent squad nowadays will cost you roughly $1,000.

The price of Axie Infinity is determined by supply and demand, just like any other asset. Fundamental occurrences like Axie Infinity halvings can influence these dynamics. Regulations, corporate and government adoption, cryptocurrency exchange hacks, and other real-world events can all influence AXS price. Many traders try to track the activities of AXS whales when attempting to create an Axie Infinity forecast. Because the Axie Infinity market is so small in comparison to typical markets, a single “whale” might have a significant impact on Axie Infinity’s price swings.

Apart from this, investments and projects that are brought in by the team have also affected the price significantly. Sky Mavis has raised $7.5 million for its Axie Infinity game, which will pay players as they play more. Mark Cuban, the billionaire investor and owner of the Dallas Mavericks, is among the supporters. They also argued that property rights encourage players to behave more like entrepreneurs and employees than users. These privileges include the ability to sell your game assets to anyone on the globe, earning liquid tokens for playing/contributing, and owning a piece of the game. Spending money on a game like Axie Infinity is more like investing because you could profit from it later by selling what you acquired.

Determining the levels of support and resistance is all that is required to begin developing an AXS price prediction, particularly in the short to medium term. Counting the number of times a price is tested and rejected in an attempt to move upwards can reveal horizontal resistance levels. You can construct a relatively accurate Axie Infinity price prediction for 3, 6, and 12 months ahead of time using support/resistance, trendlines, moving averages, and simple indicators like the RSI. In the coming months, we believe the price will be somewhere between $6 and $15. It is safe to believe Axie Infinity has a decent possibility of reaching the above-mentioned prediction target in 2021, based on current trends, investor mood, and the overall trajectory of the cryptocurrency industry.

Keeping up with Axie Infinity news and planning to buy or sell Axie Infinity around significant events is a tactic that long-term traders employ regularly. Provided that the team delivers what it has promised, the price of the token is expected to go up. And having said that, the price of AXS can touch the $20-$30 mark by the end of 2022. If the market is not hit by yet another severe correction, then bulls are likely to hit very soon for the token.

Price Prediction of Axie Infinity Token for the Next 5 Years

From 2023 to 2025, we anticipate that the price of AXS will be in the $40 – $100 range as the Team continues to build their goods and those goods gain traction with the target demographic. This AXS price forecast is based on a variety of data sets and predictive modeling, with the assumption that the present long-term trend driving the price of AXS continues rising with no notable setbacks.

Given the foundations of Axie Infinity and the prior price history of the AXS token, a price projection of about $40 – $100 is what most analysis reveals could be attainable in 2022-2025 using prior pricing data, predictive modeling, and investor sentiment gathered from multiple sources online.

Axie Infinity, like any other cryptocurrency, has a significant level of volatility, which is why it’s useful to be able to predict the price of AXS and trade appropriately. However, most of the market predictions for the token are positive. In case you are thinking of investing in the token, then let’s take a look at some of the most well-known periodicals and individuals, as well as their forecasts for the SAND price, to get some different perspectives.

Because Axie Infinity has been trending upward, we believe that similar market sectors were quite popular throughout the period in question. Our website employs a unique Deep Learning-based algorithm to assist customers in determining whether AXS is a potential future portfolio inclusion. These forecasts take into account a variety of factors, including volume changes, price changes, market cycles, and comparable currencies. According to our prediction method, the asset’s future price will be $22.159072 (449.035%) after a year.

This means that if you spend $100 now, your investment may be worth $549.035 on June 09, 2022. This indicates that this asset would be a good addition to your portfolio because trading in bullish markets is always easier.

With all of those stories and insights, it’s no surprise that Axie Infinity is still growing strongly. The community they’ve built, particularly on Discord, is really powerful. The AXS token’s future is dependent on the Axie Infinity game’s playability and popularity. The game is enjoyable to play, well-developed, and has a lot of possibilities for improvement. It has also proven its worth over the last two years, and new features are on the way to tempt even more gamers to join. However, the market is volatile and things might change in a month or even a year. Therefore, research before you put your money into it.