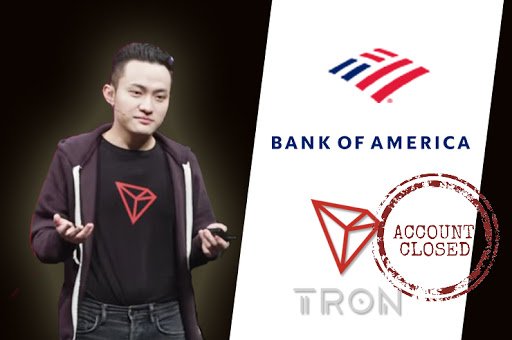 It seems like Bank of America is on a spree to close the bank accounts of its customers. It recently closed the account of one of PayPal’s former executives. Also, on the closing list was the account of Roelof Botha, a well-known venture capitalist in Silicon Valley. The latest closure is of Tron CEO’s account, who received the notification of his account closure from the bank. Justin Sun shared the news of his account closure on Twitter.

The Roelof Botha took to Twitter to share the news of his account closure. He expressed dismay over the bank’s decision to close his account after he had been their customer for over twenty years. Justin Sun responded to his tweet and mentioned that the BOA had taken the same action against him too. The BOA hasn’t come up with any solid reason for their move.

Justin Sun said on Twitter that the Bank of America had fired him as a client after holding an account in the bank for more than eight years. When Roelof Botha shared the news of his account closure, many assumptions began to surface. Of these, the most prominent was the possibility that it was done because the former PayPal executive had bought Bitcoin. Most banks nowadays restrict their clients from purchasing cryptocurrencies. The Reserve Bank of India (RBI) is an ideal example of this. Last year, it banned all businesses dealing with cryptocurrencies in the country. The ban mainly targetted crypto exchanges forbidding banks to provide services to these companies. It applies to many large banks not only in the US but also in Europe, which have to follow Bitcoin regulation news to keep up with the rules.

Despite the negative attitude that BOA demonstrates towards Bitcoin and cryptocurrencies in general, it is ready to embrace the blockchain technology. The BOA is currently testing a Ripple technology. It has also brought in a team to run the Ripple project. Moreover, it has brought onboard Ben Melnicki, a former Boa executive, who also happens to be the chief of the US regulatory affairs. This is similar to the stance adopted by many financial organizations that embrace blockchain but not the Bitcoin. China is also following the same strategy. However, many crypto enthusiasts believe that governments will also allow cryptocurrencies to flourish in their countries.