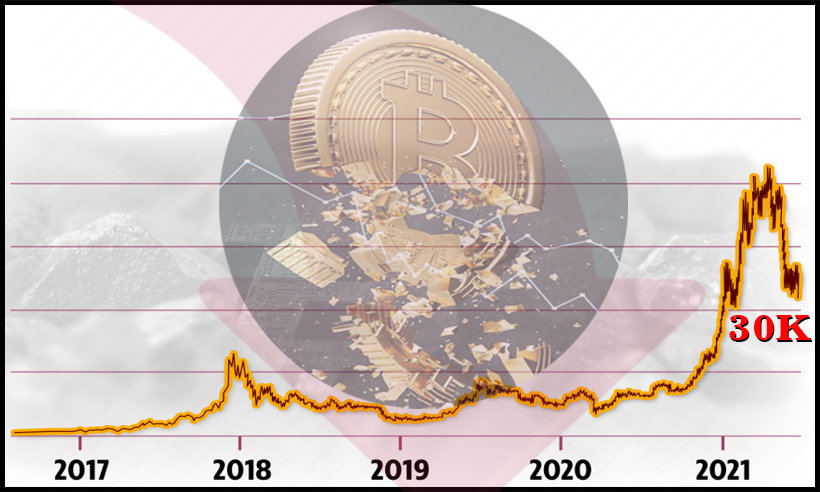 The world’s largest cryptocurrency, Bitcoin, recently broke its $30,000 support level, hitting the lowest level since Jan. 28. The drop comes a day after the People’s Bank of China ordered the country’s major financial institutions to stop facilitating cryptocurrency transactions, signaling the end of a four-week consolidation between $30,000 and $40,000.

It’s frightening to understand how Bitcoin may completely crumble right now if the narrative unravels swiftly from one technical pivot point to the next. The “digital gold” story is unraveling, and we’re approaching critical price levels that will find it harder to justify the most important bull cases for Bitcoin.

Bitcoin reached a high of $64,000 in mid-April before falling 35% in May due to concerns about the negative environmental impact of cryptocurrency mining and a renewed regulatory crackdown in China. The Federal Reserve unexpectedly pushed up the date of the first interest rate hike to 2023 last week, adding to bearish pressures on bitcoin.

While Bitcoin is down 8% in the last 24 hours, other significant coins like Ethereum, XRP, and Cardano are down 10% to 20%. Dogecoin, the satirical cryptocurrency, is down 25%.

The decline in the crypto market has led to the slowdown of the Altseason. As a result, according to CoinMarketCap, Bitcoin’s dominance rate has reached one-month highs exceeding 47%.

If there isn’t a speedy recovery over $36,000, there could be additional chart-driven selling.

Key support is currently at $30,000, with the focus shifting to the early December highs around $19,900 if it falls below that level.

So What Happens After This?

When you consider the power of narrative disruption in bitcoin, it’s easy to see why there’s a risk of genuine collapse: it’s moving in the opposite direction of gold at a time when inflation is becoming a major issue for investors. This is the most important thing ongoing in the current scenario. The most popular justification for purchasing bitcoin – digital gold — is imploding at the worst possible time. It doesn’t matter how bitcoin has performed against gold this year, last year, or since its start. What matters is how bitcoin performs in comparison to gold when inflation is a top concern of investors for the first time in more than a decade.

After the cryptocurrency fell around that low during its May meltdown, technical analysts have been eyeing the $30,000 level as a critical support level on the charts. Galaxy Digital CEO Mike Novogratz had noted on CNBC’s “Squawk Box”–

“Thirty-thousand, we’ll see if it holds on the day. We might plunge below it for a while and close above it. If it’s breached, $25,000 is the next big level of support.”

After Elon Musk raised his concern about BTC’s environmental impact, it’s been on a roller-coaster ride, hammered by a barrage of headlines from China, where officials have put tighter limitations on energy-intensive mining and forced financial institutions such as Alipay to stop transactions with crypto firms. Last week, the price momentarily reached $40,000 before dropping again on Monday.

However, chances are that the market is going to rise again, and the bulls are going to hit higher.

Crypto Market to Bounce Back

The cryptocurrency market has seen significant pullbacks before, with bitcoin plunging nearly 80% from its late 2017 highs at one point. Professional cryptocurrency investors have cautioned that the market will remain turbulent in the coming years. Fairlead Strategies founder Katie Stockton told CNBC:

“The only guarantee with the cryptocurrency space is volatility, and obviously that’s what we have right now. It’s not new, we’ve had days like this before, it’s just a matter of navigating through this noise.”

Despite previous pullbacks, Mike Novogratz noted that crypto market infrastructure is only getting more mature, which has helped usher in more institutional support over the past year, with major hedge fund managers, pension funds, and banks jumping into crypto, and registered investment advisors looking for ways to get clients exposure to cryptocurrencies in ways that are compatible with their current portfolios.

Between mid-September and the high in April, the price of Bitcoin increased by about 500%. Despite the current drop, the cryptocurrency has gained more than 200% in the last year. It is only a matter of time till the bears pull back. Elon Musk even recently shared that he is thinking about again accepting transactions in Bitcoin for Tesla. If this happens, then bull will take over not only Bitcoin but also the entire crypto space. Moreover, when we talk about the market recovery, Bitcoin will be the first token to go up, followed by the Altcoins. 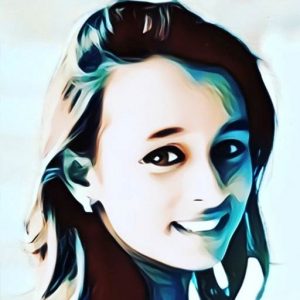