Bitcoin has reached yet another milestone of $34,000 just weeks after breaking multiple records. Bitcoin’s price escalated quickly over the last few months of 2020. Its market cap has nearly doubled itself over the past 3 months and is nearing $600 billion at the time of writing this article. Its price almost advanced 50% in December when it cracked the $20,000 mark for the first time.

Can Bitcoin win the game this time?

Bitcoin lost approximately 25% during March 2020 due to the pandemic outbreak. However, it was only onwards and upwards for Bitcoin after that. Antoni Trenchev, managing partner and co-founder of Nexo in London, said, “The currency will be on the road to $50,000 probably in the first quarter of 2021.” Moreover, with institutional investors returning to the action, it will probably boost the prices further. 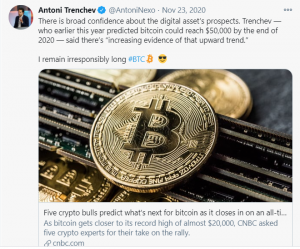 Bitcoin is becoming a big name in major financial institutions like Grayscale and PayPal. Bitcoin has progressively been “embraced in more global investment portfolios as holders expand beyond tech geeks and speculators,” Bloomberg Intelligence commodity strategist Mike McGlone mentioned last month. Some investment officers even predicted that Bitcoin should eventually climb to about $400,000.

Investment expert, Garrick Hileman, said that Bitcoin can become a trillion-dollar asset as early as next year. He also believes that even though the surge in the price of Bitcoin in 2020 was mostly due to institutional investors, he expects to see continued buy-in more from retail and Wall Street investors coming in. “Some big institutional players like Stanley Druckenmiller, have acknowledged that Bitcoin is becoming a reserve asset and validating the digital gold thesis,” said Hileman.

Despite all the positive notes coming in favor of Bitcoin, it is wise to remain cautious as Bitcoin is still a thinly traded market. There was an 83% rout that came after the big run-up in price in 2017.