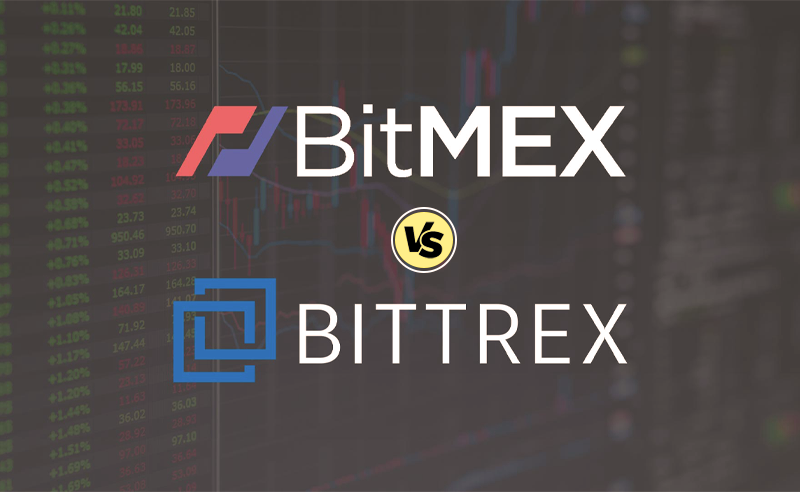 Which Is A Better Crypto Exchange: Bitmex vs Bittrex

Having trouble deciding which exchange is better among Bitmex and Bittrex? There are not many similarities in both the exchanges and it’s a pretty clear choice. Still, if you are here, then read out our comparison between Bitmex vs Bittrex to decide which exchange will best fit your needs. Without wasting a moment, let’s get started right away.

Bitcoin Mercantile Exchange, known as BitMEX worldwide is one of the top cryptocurrency trading platforms. The exchange was developed in 2014 by one of the employees of CitiGroup, Arthur Hayes and his friends. Unlike other exchanges, BitMEX was made Futures trading in mind. The platform lets you have a high profit through margin trading in cryptocurrency, which was uncommon at that time. If you are considering BitMEX as your cryptocurrency exchange, we hope you have enough knowledge about futures trading and other such advance financial operations. Although, if you are a beginner, you should drop the idea because such services are extremely risky if done without proper knowledge.

Bittrex started in 2014 and took the title of one of the largest cryptocurrency exchanges in a while. It was built on Microsoft’s cloud platform Azure with security as its priority. The exchange is known for its quick transactions, and there are no instances of security breaches till now.

Now if you are confused between Bitmex and Bittrex, then you must read the whole article to get to a conclusion.

BitMEX vs Bittrex: PROS and CONS

READ  Democracy in Cryptocurrencies: The Concept of DeFi Governance Tokens

Let’s start with outlining the pros and cons of both the exchanges:

BitMEX vs Bittrex: What makes them different?

If you are comparing BitMEX vs Bittrex, it’s necessary we first talk about their specialities. Unlike common exchanges, BitMEX is a little different as it provides advanced trading options such as futures trading and swaps. This is the reason we don’t recommend BitMEX for beginners. With all these advanced features, the platform’s interface is somewhat complicated and cannot be understood easily by newbies. Those who don’t know accurately about margin trading should look out for some other platform with an easy to use interface such as Coinbase.

Alternatively, if we talk about Bittrex, it is not that complicated, and beginners can try it if they want. One the primary reason to use this exchange is the variety of cryptocurrencies available on the platform. If there’s a coin you couldn’t find on any other exchange, have you searched for it on Bittrex?

BitMEX has an attractive fee structure as it rewards the users who add liquidity to the platform. Although the platform does not provide any discount on its fee for takers, the market makers who trade Bitcoins receive 0.025% credit and those who trade altcoins receive 0.05% credit from BitMEX. Alternatively, the takers have to pay a fee on both Bitcoin and altcoin trades. For Bitcoin, the fee is 0.075%, and for altcoins, it is 0.25%.

The fee structure of Bittrex is kind of similar to that of Changelly, although the platform is made for advanced traders. It charges a flat fee of 0.25% on trades of all cryptocurrencies, Bitcoin or altcoin. Moreover, the platform does not have any reward system for institutional traders or the users who trade in large volume or adds liquidity to the platform.

Which Exchange is More Secure?

When you are choosing an exchange for trading cryptocurrencies, security should be your priority whether it’s about BitMEX vs Bittrex or any other exchange. However, it’s not easy to determine which platform is more secure, and you need to do extensive research to get the answer. BitMEX does not have a big community because of its complicated interface and services. Although, as per the user reviews, there are little to no complaints concerning the services provided by the exchange.

Besides, the platform has never been hacked in the past, which says a lot about its security. So, in terms of safety, we consider BitMEX a fine option.

Bittrex includes the option of two-step authentication to provide its users with another layer of security. The reviews on the platform are majorly positive because of the variety of altcoins supported and its interface. There are some complaints about the slow customer service of the exchange though. Bittrex too has never gone through a major hack, but there are instances when some users complain about losing assets. However, the claims are not verified, and it can’t be said if it’s an issue with the platform or the lack of security from the user’s side. If you are to trade in Bittrex, we suggest you set up a strong password and must enable two-factor authentication.

Before we get to the verification part, let’s discuss the availability of platforms in various countries. Bitmex serves all over the world except a few sanctioned countries like Iran and Syria, etc. moreover, the platform doesn’t provide services in America due to regulatory issues.

However, Bittrex is one of the few exchanges that serve in America. So, if you are situated in America, the answer should be clear for you.

Coming to the verification procedure, in BitMEX, you just need to sign in with your email address. However, you might have to provide further authentication to comply with AML laws.

In Bittrex, there are multiple levels of verification. Initially, you can register with your email address and start trading. However, to make withdrawals, you must go through the verification procedure.

We hope you have decided which exchange is the best fit for you from BitMEX vs Bittrex. However, if the confusion continues and you are not able to determine which crypto exchange you should invest in, then you should read our guide about top cryptocurrency exchanges. Before you start trading in any coin, make sure you know everything about it.