Cardano (ADA) Technical Analysis: Is There a Chance of Falling by $1? 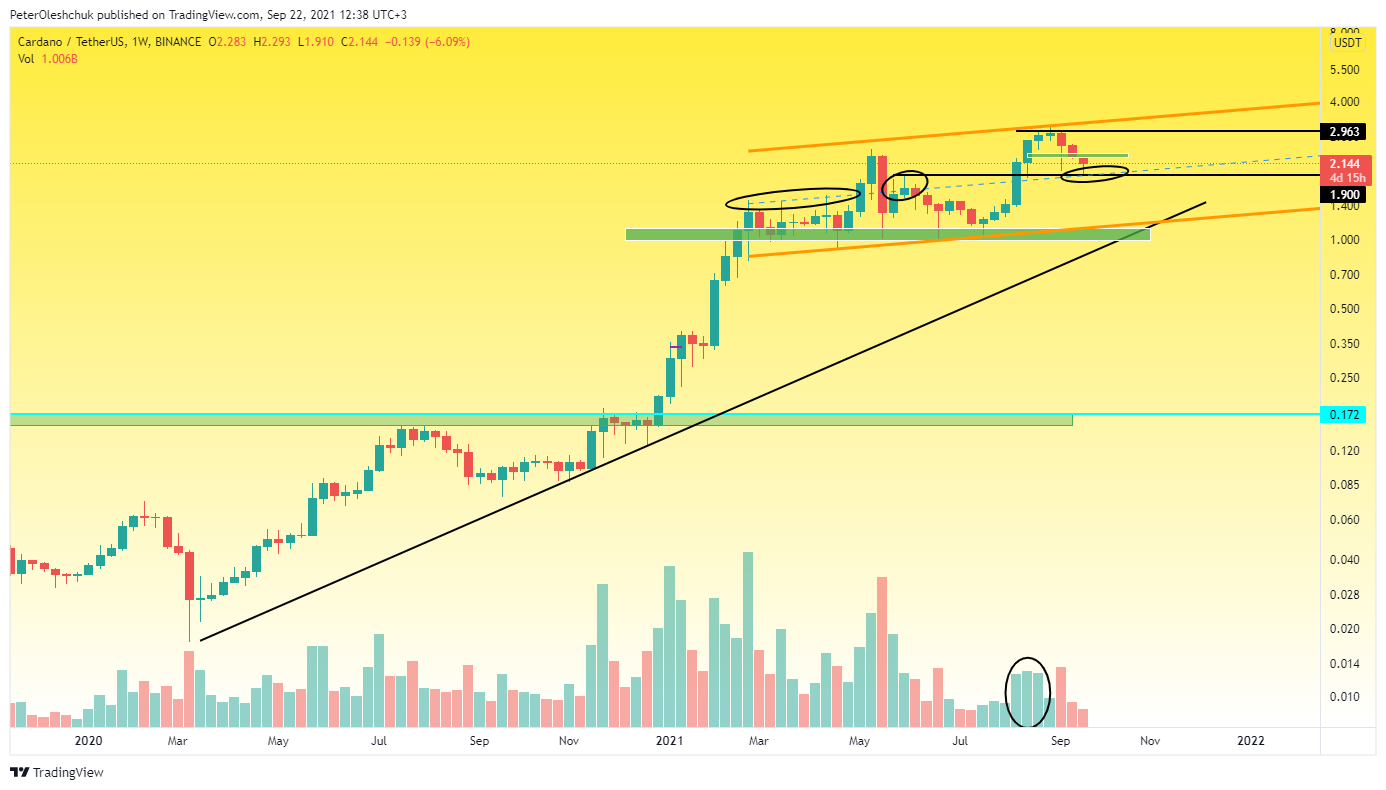 The last three trading weeks in the Cardano market have not been very pleasant for investors. Sellers managed to lower the price by 35% during September. However, significant aggression in the ADA market during the fall was not felt. If at the beginning of September, sellers tried to push the price down at increased volumes, then the next two trading weeks were held at low volumes.

In the previous analysis, we wrote that despite the weak pressure of sellers on the ADA price, the passivity of buyers in the range of $2.3-$2.35 may lead to a continuation of the downward trend. Unfortunately, this is what has happened. After 12 days of consolidation over this range, buyers have never taken the initiative to start a local growth trend. Seeing the lack of power, sellers confidently pushed the price lower on 20 September. And this led to a $2 test.

Besides the first critical mark on the way to $1, sellers also tested the middle line of the orange growth channel. The ADA price has been traded in this channel since February 2021. If you look closely at the chart, you can see that the ADA market correction began after buyers tested the upper trend line of this channel. Given how the middle line of this channel has worked out in history, we assume that buyers will be able to organize at least a local price rebound. If during this rebound the price does not break the range of $2.3-$2.35, we will see a continuation of the ADA market fall with a final target of $1.

Technical Analysis of ADA on the Daily Timeframe 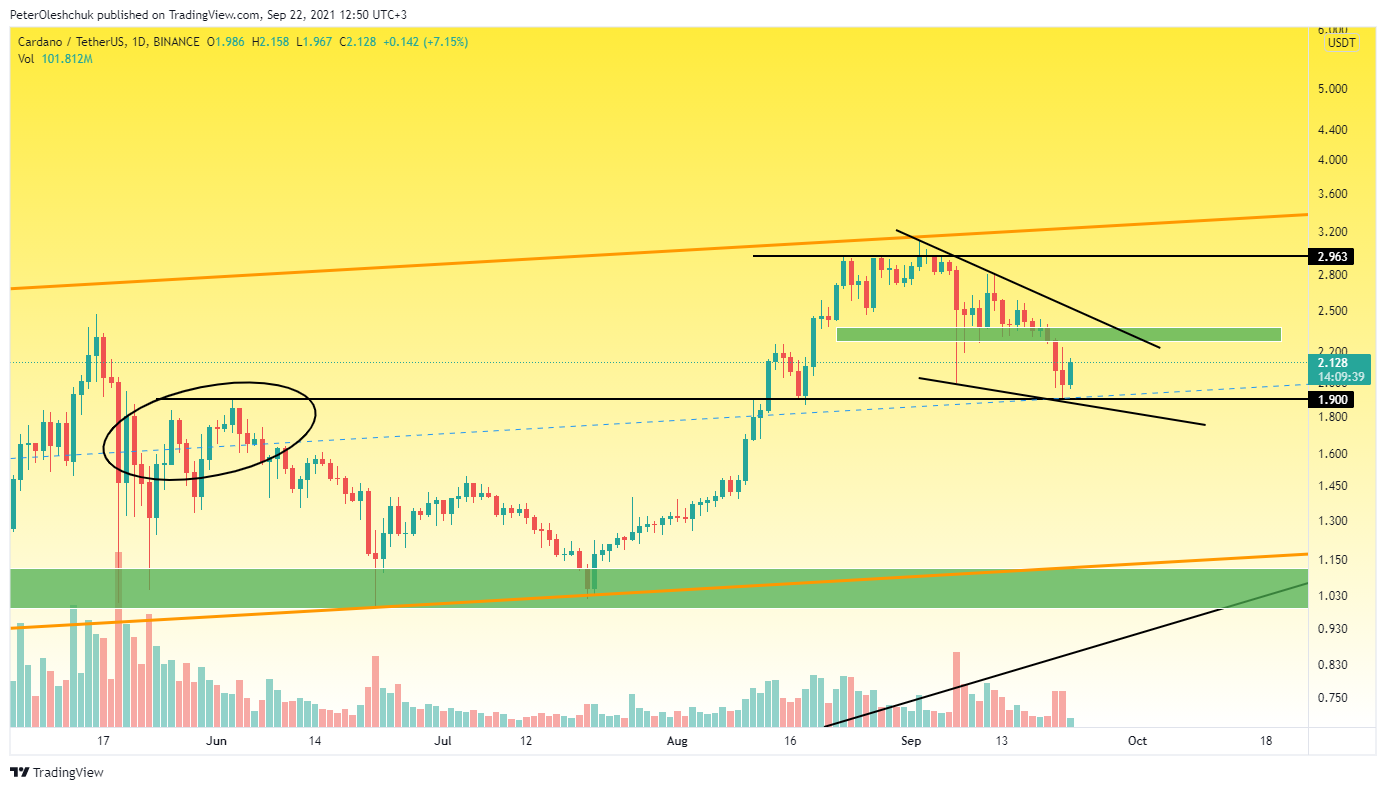 Analyzing the movement of the ADA price on the daily timeframe, we noticed that the updates of the local lows starting from 7 September are accompanied by an increase in volumes. However, each subsequent low is updated more and more difficult. Thus, the price of ADA formed a consolidation wedge, which may indicate the completion of the correction. To work out this forecast, buyers should test the upper trend line of the wedge during the current attack.

In addition, after the test of the trend line, the new fall wave should not be aggressive and at low volumes. This fact will indicate the complete depletion of buyers and the readiness of the Cardano market for new medium-term growth. Therefore, it is worth watching carefully how sellers break the $2 mark.

The ADABTC Price Got into Consolidation 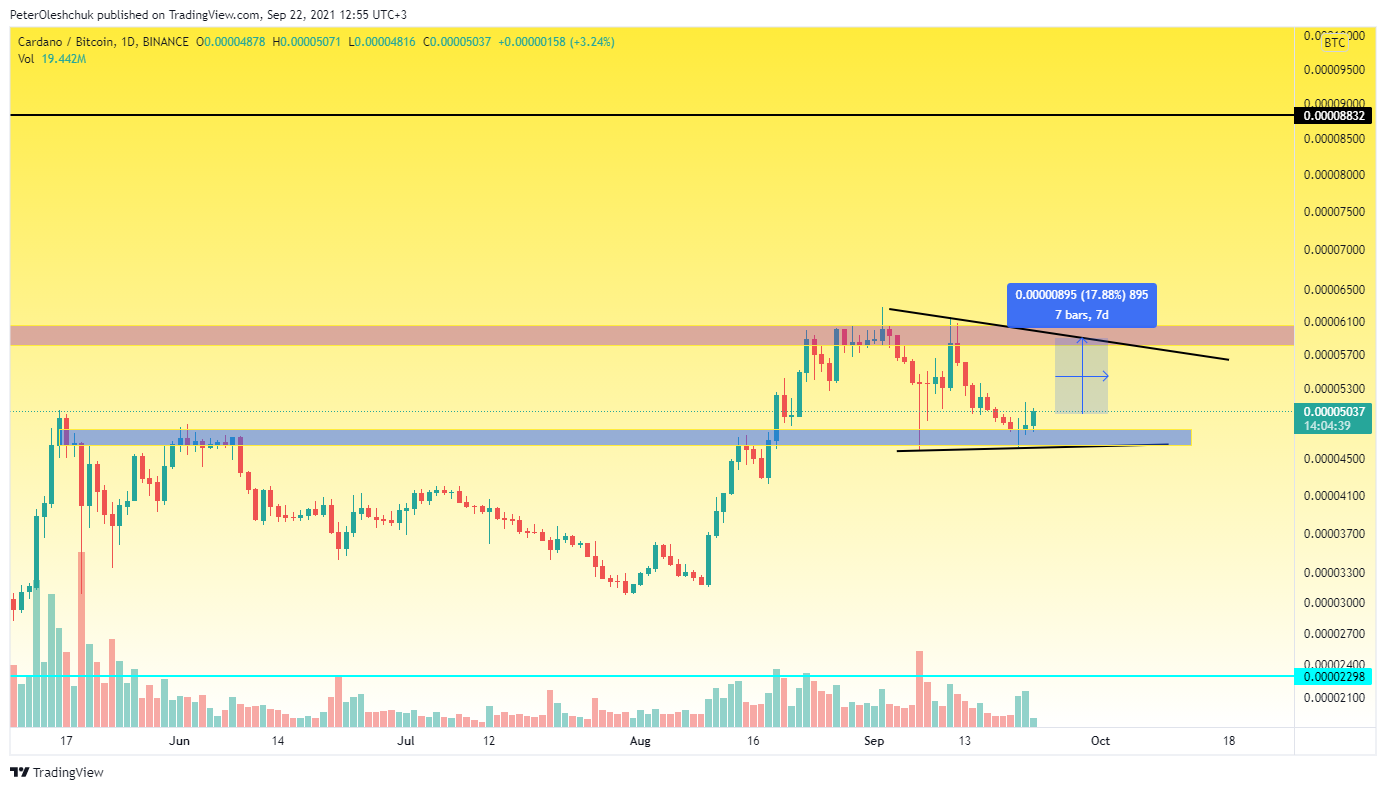 Given the active price movements of the ADA in the period from 6 to 13 September, Cardano market participants have not yet decided who is stronger. When the price sharply changes the vector of movement twice, and it is accompanied by high trading volumes and increased volatility - this is the first sign of the beginning of consolidation.

Given this fact, the probability of increasing the ADABTC price by 17%-20% in the near future is quite high. Therefore, if the Bitcoin price stabilizes, investors can count on a partial recovery of the ADA price. Though, by mid-October, the market will be complex and unpredictable.