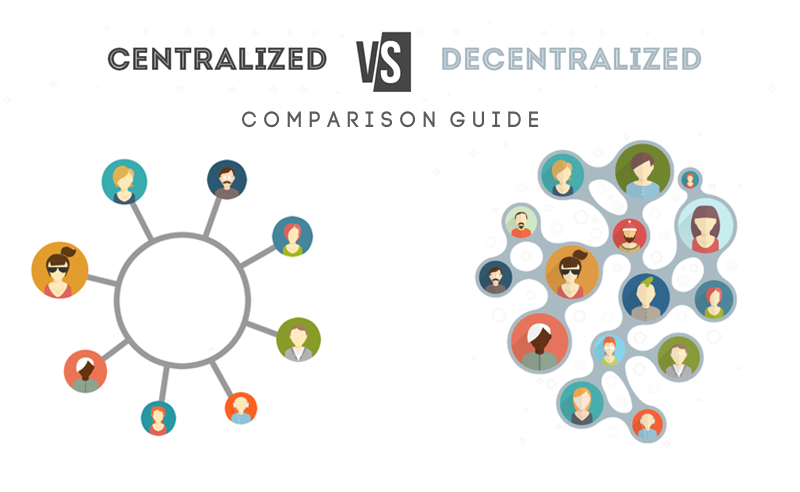 A Beginners Guide to Centralized Vs Decentralized Cryptocurrency

Blockchain-based digital currency is attracting the interest of the traders and investors all across the world due to its decentralized nature. Also, governments of many countries are planning to launch the digital currency which would be centralized in nature, i.e. managed by the central authority of the country. Confused? Centralized vs decentralized cryptocurrency has been a part of raging debate amongst the crypto community for a few years. Let us try to understand the basic concept of both decentralized and centralized blockchain, currency and compare them to have a crisp idea about the future of the crypto space.

Satoshi Nakamoto in 2009 created our very own decentralized cryptocurrency or bitcoin.  The core principle of decentralization which means no single entity manages the crypto coins attracted the traders to invest in the cryptocurrency. Blockchain technology-based digital currency utilizes a number of entities and distribute the load of a network amongst multiple computers of the network. Crypto enthusiasts appreciate the idea distributed ledger-based decentralized currency as network provides easy traceability, transparency of transactions and relatively less prone to cyber-attacks. Some of the examples of cryptocurrency from which almost all of you might be well aware are Bitcoin, Ethereum, Litecoin and many more.

As the name suggests, centralized cryptocurrency is that in which a majority of the supply of coins and assets is managed by a single entity, usually by the organization that founded it at first place. The degree of centralization depends on the type and purpose of ownership. More the currency is centralized, more its management, supply, operations, rules associated with etc is controlled by that particular single entity or organization or authority. In the crypto space, still, the idea of centralization is not supported by the majority of the crypto community as it is against the basic notion of the blockchain technology-based cryptocurrency. Mining (you cant mine coins, can only do the trade) and governance (development and management by a team of the entity) centralization are the major reasons which the decentralization and limitation of the cryptocurrency.

In crypto space, Ripple (XRP) tops the list of most centralized cryptocurrency as its founders have the control of over 60% of pre-mined XRP in circulation. Crypto miners face the mining constraints and traders might face the governance issues by Ripple Labs. But on the contrary, more stability can be expected as the currency is majorly controlled by the single entity. NEO and EOS are the other two popular cryptocurrencies that are highly centralized as they are governed by a fixed number of nodes managed by their own organizations.

If you dig deep, every cryptocurrency(except Bitcoin and Ethereum) is centralized in one or the other way and not follows the principle of complete decentralization.

It is well known to even a newbie that there are only a few of the centralized currencies present in the crypto space due to blockchain still being niche and the crypto community is relatively supporting centralization. But, the principle of centralized cryptocurrency also has its own advantages and decentralized one has its own disadvantages. Let us compare both principles and try to find out which one is better.

Besides the major difference, both the networks vary on the different grounds like that of scalability, transparency, bandwidth needed and many more. But the major factors signifies that none of the network can be employed as perfect for cryptocurrency evolution.

In the comparison guide of centralized vs decentralized cryptocurrency, we cannot justify which one is better as both have them have some pros along with some cons. Crypto enthusiasts support the idea of decentralization but the crypto movement might not accelerate without centralization. In a way, crypto space needs hybrid cryptocurrency with the best of both the networks so that governance and security can be assured at the same time without compromising the confidential information of the users deploying the network to share information or completing any transaction.