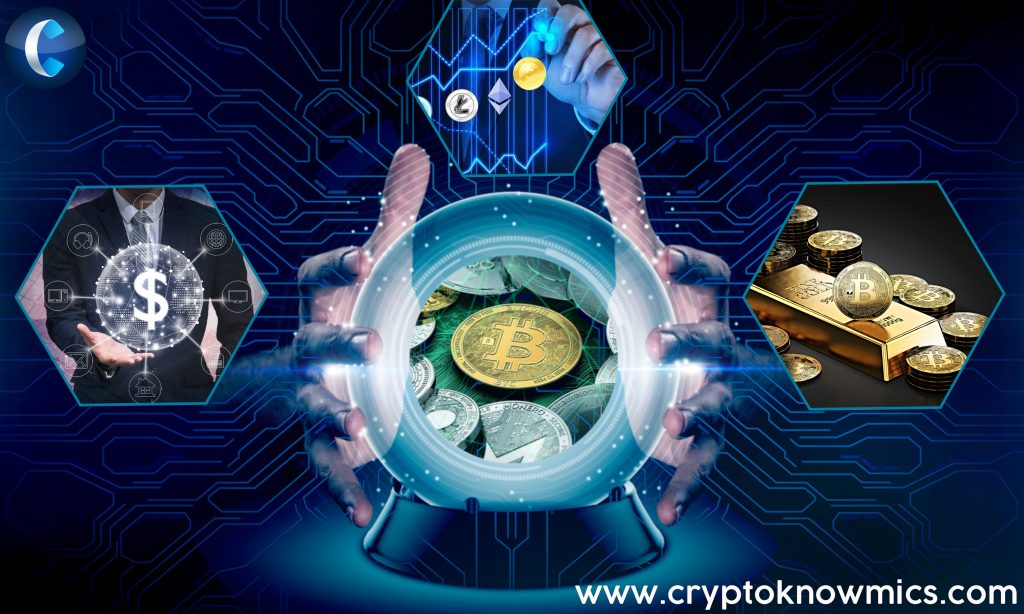 Crypto Forecasts that Became the Talking Point of 2020

The COVID-19 pandemic got industries coming down and businesses to shut down. However, the world of the crypto market went unaffected as 2020 saw cryptocurrency prices reaching heights and transactions shooting rocket high. The year was not much of a surprise in the crypto space as many cryptocurrency predictions came true in 2020.

The crypto market saw thousands of predictions in 2020. Apart from Bitcoin becoming the 7th largest currency in the world and hitting the $25k mark, various other events came to life that were predicted in the past. Especially, the decentralized market had triumphed in 2020, with many positive predictions coming true.

In contrast, the crypto industry has walked its way to millions of Twitter battles. Prominent personalities who were earlier against the industry are now accepting the benefits. For example, a long-time Bitcoin critic JP Morgan Chase has now begun providing banking services to crypto exchanges like Coinbase and Gemini in 2020.

With opinions changing and cryptocurrencies making their way to the mainstream market, here are the top cryptocurrency predictions that came true in 2020.

Cryptocurrencies Getting Better than Cash

Powerful minds across the planet have said it over and over again on how digital currencies can win over the payment industry all around the globe and give complete financial freedom to people. Bill Gates, the co-founder of Microsoft, in an interview for Bloomberg in 2014 said:

“Bitcoin is better than currency as you do not have to be physically in the same place and, of course, for large transactions, currency can get pretty inconvenient.”

Musk often takes it to Twitter to show his support for Bitcoin and other cryptocurrencies. He recently tweeted, “Bitcoin is my safe word!” Moreover, he recently inquired about converting large transactions of Tesla’s balance sheet into Bitcoin.

Elon Musk inquires about converting “large transactions” of Tesla Inc.’s balance sheet into Bitcoin in a Twitter exchange with Michael Saylor, a prominent booster of the digital currency https://t.co/bci1YoTt5J

In 2020, these predictions and trust in digital currencies proved right as cryptocurrencies like Bitcoin and Ethereum continue to play a larger role in the world of cashless futures. No doubt that the cash industry still dominates the market, but many global financial trends give a hint of change in the tide. Moreover, with health concerns increasing, especially after COVID-19, it is all the more expected to push people towards a cashless environment.

In a country like India, where the economy is seeing a downfall, retail investors have started to get inclined towards cryptocurrency investments and crypto transactions have risen high. This comes after the Supreme Court of India lifted a cryptocurrency ban in India laid by the Reserve Bank of India.

Other Cryptocurrencies Winning over Bitcoin

Richard Branson, an entrepreneur and owner of the Virgin empire, said in 2014:

“Despite Bitcoin’s dominance, there may be other currencies like it that may be even better.”

This year has proved this prediction to be true and one of the classic examples is the milestone achieved by Ethereum.

With Bitcoin’s price reaching $22,693.24, it will be quite easy to say that it has won over the hearts of crypto traders. However, it is nothing if we compare its success to the milestone Ethereum has reached this year. Bitcoin price reached the stars and it brought a wave of excitement in the crypto space, but soon it was overshadowed by a new rage in the decentralized finance sector.

In 2020, developers created many financial institutions and instruments that run with anonymity on computers and are free to access, with the help of DeFi. Many businesses shifted to DeFi and the amount of value locked in DeFi applications surpassed $1 billion in 2020. Moreover, decentralized finance became the go-to word in the crypto industry with thousands of successful DeFi projects this year. The total value locked in DeFi projects is over $14 billion.

Ethereum benefited the most from this as this DeFi revolution shot the Ethereum price to reach the sky. This resulted from the increase in demand for block space by DeFi apps. More than 60% of these Dapps are built on the Ethereum platform. Etherum is also in Phase 2 to convert itself from the proof-of-work algorithm to the proof-of-stake algorithm.

Crypto experts accept that Ethereum is an emerging force in the crypto space that is expected to overcome every challenge and hold its dominance in the crypto and blockchain space. There have been a lot of predictions that made hopes on cryptocurrencies like Etherum to outperform Bitcoin in the future. 2020 has been the year for that to come true.

Coinbase CEO of Coinbase Mike Novogratz made a blockchain adaptation prediction about 2020:

“Half the world’s billionaires will be from the crypto space.”

This quote has proved itself to finally becoming true in 2020. This is because industries have started to take up blockchain technology and bring innovations to the market. Blockchain technology is giving business solutions that are never thought of before. The blockchain industry was expected to lead the economy and finance world when Gartner made a blockchain prediction saying, “…the banking industry will derive 1 billion dollars of business value from the use of blockchain-based cryptocurrencies by 2020.”

“Bitcoin is a remarkable cryptographic achievement and the ability to create something that is not duplicable in the digital world has enormous value.”

As the pandemic broke out, and people’s life started to revolve around the digital framework, organizations and industries shifted to alternatives like the digitalization of workflow. Digitalization has accelerated global trade and various other sectors.

A report by the World Trade Organization reveals,

“The COVID-19 pandemic has accelerated digitalization in all sectors, including international trade, which remains hindered by inefficient paper-intensive processes. Of particular interest for trade digitalization are projects leveraging distributed ledger technology (DLT) – commonly referred to as Blockchain.”

The devastating year of 2020, has brought out the potential of blockchain technology. Dominating industries and sectors have collaborated with blockchain for business growth.

Mike Novogratz, the CEO and founder of Galaxy Digital Holdings, said back in 2018:

“I do believe Bitcoin is going to be digital gold. That means it’s the only one of the coins out there that gets to be a legal pyramid scheme. Just like gold is.”

This quote has come into existence as Bitcoin has gone to outperform gold in 2020. Bitcoin’s market cap has reached $428,781,660,771 i.e, $442 billion. And that of gold is roughly $10 trillion. According to a report by Business Insider, Bitcoin’s market cap could hit $1 trillion in 2021 as its growing reserve currency status drives adoption higher.

Experts believe that one of the main reasons for cryptocurrencies outperforming gold this year is the DeFi boom. While some believe that this surge is nothing but a temporary swing, personalities like Tyler and Cameron Winklevoss, co-founders of the Gemini crypto exchange, have said that “Bitcoin is better than Gold!”

The Increase in Crypto Investments by Various Institutions

There have been many predictions about the increase in crypto investments by prominent institutions of the world. Coinbase CEO Mike Novogratz made a crypto prediction about 2020 and said:

This prediction came true in 2020 and was a boon to the financial world. Seamus Donoghue, METACO’s VP of sales and business development, said that crypto regulations have impacted a business a lot. It has brought about many changes in government agencies and these changes have benefited the institutional investors to a very great extent in 2020.

“In 2020, institutional investors will move beyond testing and will start to create new demand for crypto.”

Moreover, very big names of large institutional players like Goldman-Sachs and Morgan Stanley started to trust and began to show a keen interest in the crypto market.

However, there was also a major institutional investment in the crypto space by Nasdaq-listed MicroStrategy. In August this year, it purchased 21,400 Bitcoins as part of its Capital Allocation Strategy. It now holds 70,470 bitcoins worth over $1.596 billion in its treasury reserve.

With the above predictions coming true it seems that 2020 has been a big win for the crypto space. The crypto and blockchain industry is finally emerging from a shady and unknown corner to a full-fledged mainstream industry. Many latest cryptocurrency predictions are coming up and are yet to go a long way.

Even before the Coronavirus hit us, the economic world was moving towards a decentralized system. There are indeed limitations in the blockchain space, but with business getting inclined towards it, and the DeFi revolution making its way everywhere, cryptocurrencies like Ethereum are making a new place for the financial world. Bitcoin creator Satoshi Nakamoto once said while talking about the superiority of decentralization over centralization, and how the central banking system is part of the problem:

“The root problem with conventional currency is all the trust that’s required to make it work.”