DASH Technical Analysis: The Growth to $375 Is Possible After the Correction

The local fall wave that buyers began in the DASH market on 27 September is under threat. In the weekly timeframe, we see that buyers are losing the initiative. For the second week, sellers are trying to break the local trend line down and break the growth channel. Thus, looking at how the weekly candle from November 15 was closed, sellers have a good chance of testing the critical range of $145-$155. Such a scenario could be realized if the BTC price continues to fall to the range of $52,000-$53,000. 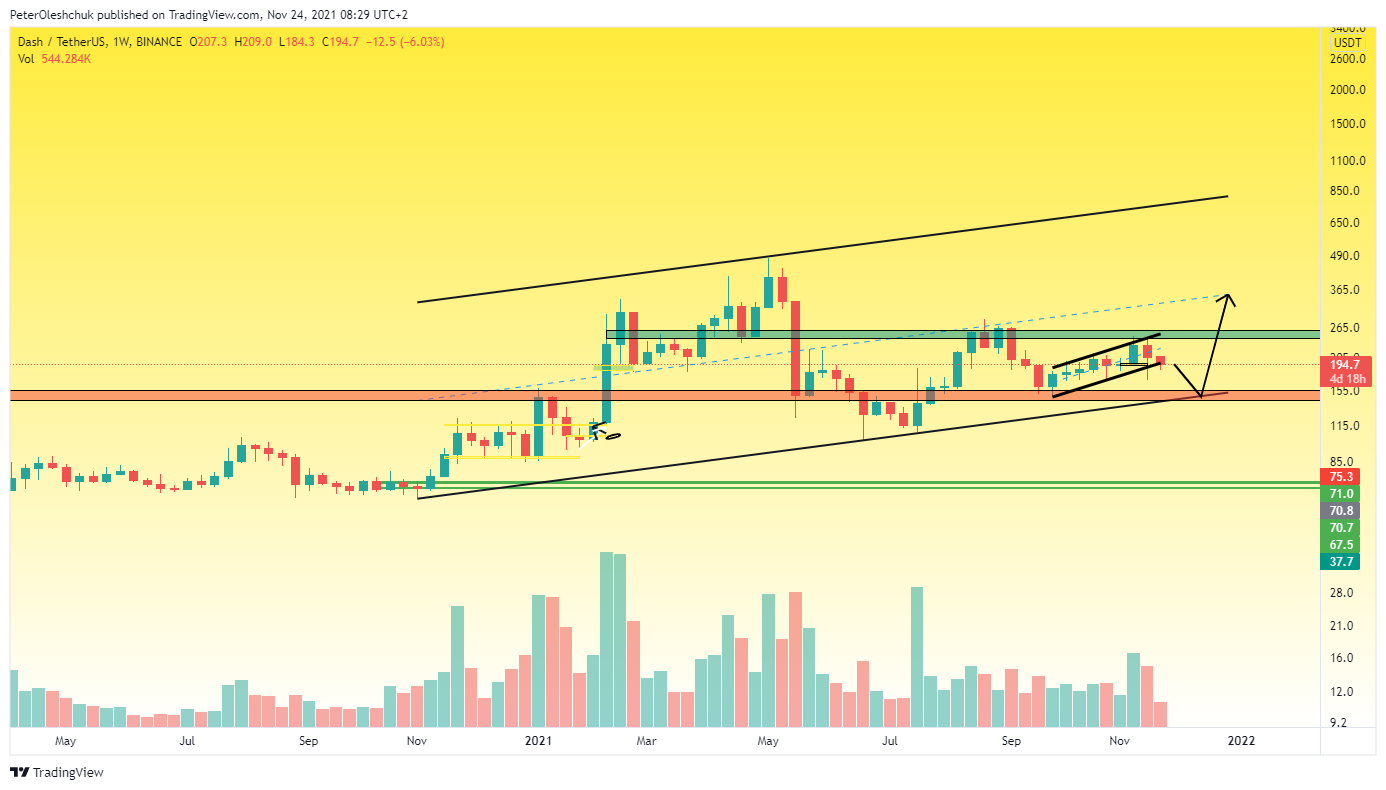 The critical point for activating the negative scenario is around $186. If buyers retain control of this mark this week, then from next we can see a new attempt by buyers to break the important range of $250-$260. The weekly timeframe clearly shows that it was from this liquidity zone that the DASH price began to reverse two weeks ago. Even increased trading volumes from buyers did not allow prices to break through this range. This is the second attempt of buyers to continue the growth wave. The first was in August 2021. Therefore, after breaking the liquidity zone of $250-$260 up, we will expect a rapid growth wave with the final target of $375. 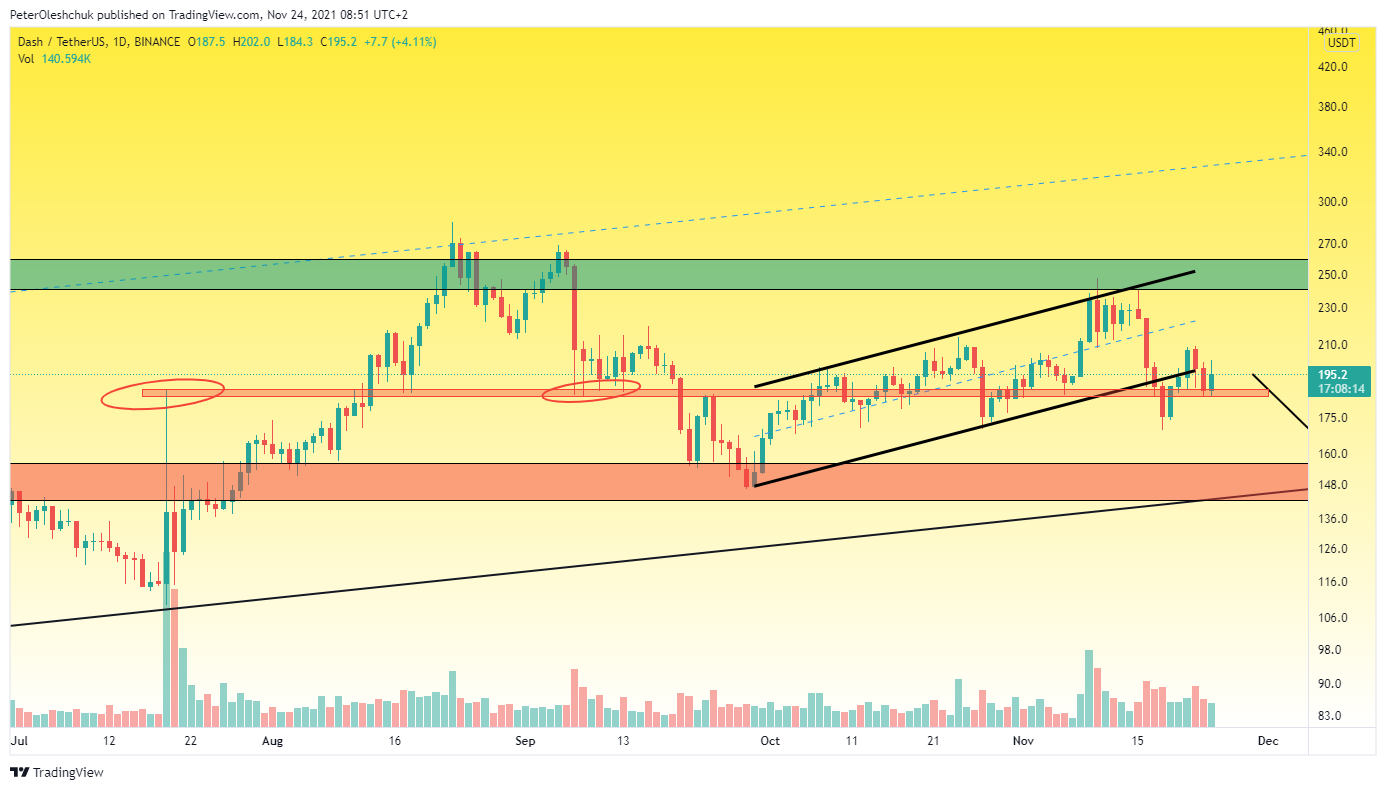 If you look closely at the daily timeframe to the mark of $185, you can see that since July 2021 the price has often turned around from this mark. During a strong fall wave in August 2021, the DASH price stopped for 2 weeks at this point. Thereafter, market participants began to trade this mark, making the consolidation range wider.

The last three days of trading on the DASH market have shown that buyers are ready to keep the $185 mark again. Pay attention to the daily candles on 22-23 November. Sellers on increased volumes pressed on the price, but could not take control of the mark of $185. Unless there is an unexpected Bitcoin collapse in the cryptocurrency market, the DASH price has every chance to start reversing from $185.

The DASHBTC Price Is Moving Peacefully in the Consolidation Wedge 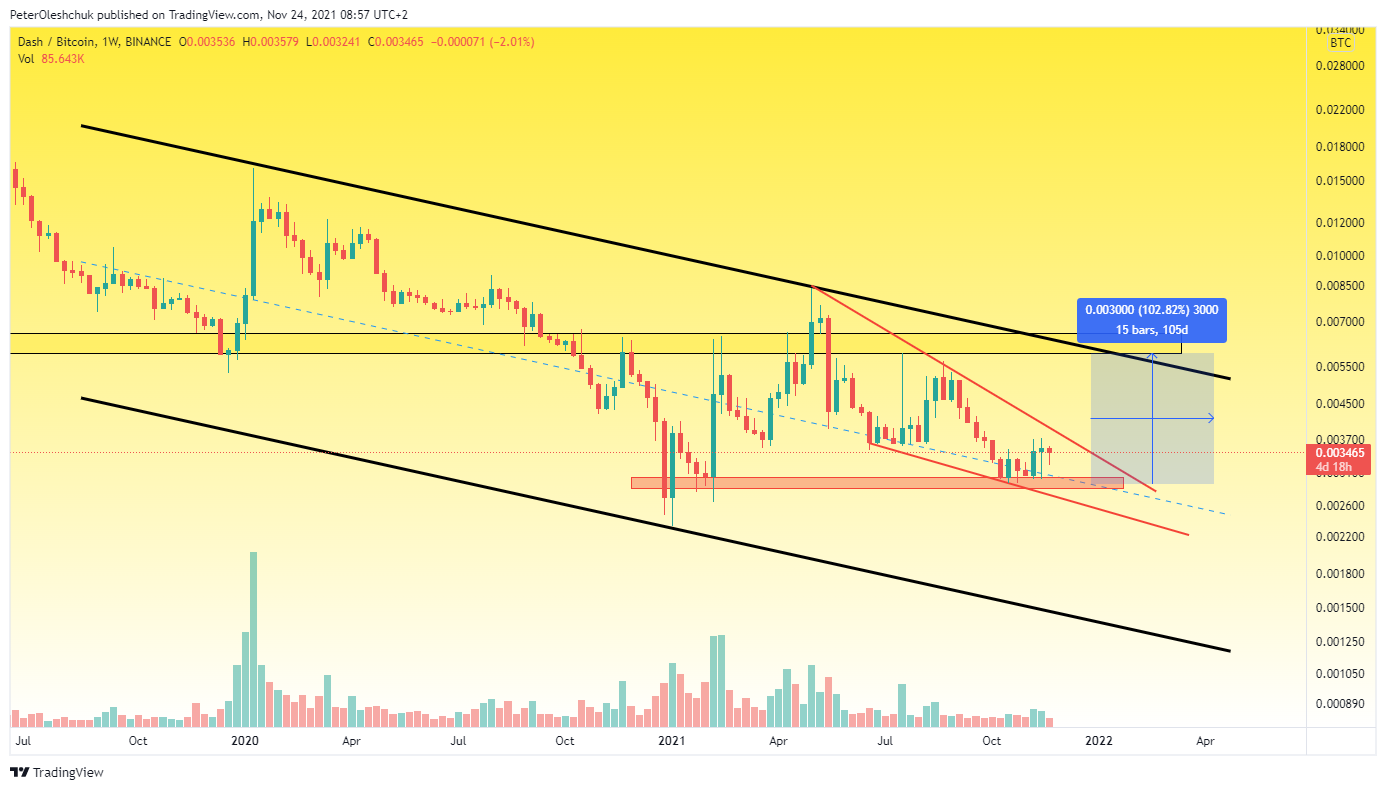 Carefully studying the movement of the DASBTC price on the daily timeframe, you can see that the price is moving in a global downward trend as well as the LTCBTC market. However, now over the past six months, the DASHBTC market has slowed its downward trend and moved into a consolidation wedge. From such a wedge, the probability of a shot up is about 100% maximum.

To implement this scenario, it is important for buyers to keep the mark of 0.00286. Therefore, with a little patience, DASH investors in the near future should see a strong impulse for growth. Though, whether buyers will have enough strength to break the two-year downward trend in the DASHBTC market is still unclear.