Dump the Dogecoin, It’s Time to Put Foot on Mars

Tesla and SpaceX’s CEO Elon Musk has yet again turned things on the crypto space with his one comment on Twitter this Tuesday. The richest man on the planet took it to Twitter and agreed with a tweet of Mansour Shahrokh and Binance CEO Changpeng Zhao saying, there could be a possibility of launching a “Marscoin.” Even though he hinted at launching his own cryptocurrency, it resulted in another namesake cryptocurrency skyrocketing. 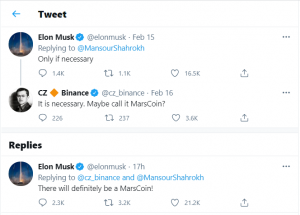 Elon Musk hinted at the idea of Marscoin in December 2020. Marscoin is a cryptocurrency that would apparently power the economy of a colonized Mars. On Tuesday Musk was talking about this, while the crypto investors confused it with the already existing cryptocurrency with the same name. Investors rushed towards purchasing Marscoin (MARS), and the cryptocurrency price took a seat on a rocket.

The price of the cryptocurrency was around $0.09 until earlier in the day before Musk’s tweet and hit an all-time high of $2.5 in the aftermath. Its global market cap was at $2 million on February 15th, and today it has reached $11 million. Its price is hovering above $0.4 at the time of writing. 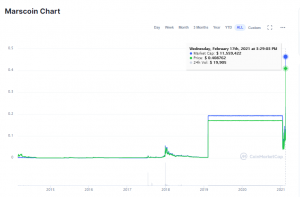 Musk Has History of Influencing the Crypto Industry

This is not the first time that Elon Musk has turned the tables of the crypto industry. He often moves the prices and assets with the crypto industry. A few days ago, Elon’s tweet supporting Dogecoin, not only made the crypto popular, but people actually invested millions behind the dog crypto which was started as a joke.

Even though this time this was unintentional and he didn’t want to do what he did, it still shows his influence over the crypto and blockchain space. So let’s wait for the next tweet and see the crypto market flip-flop.