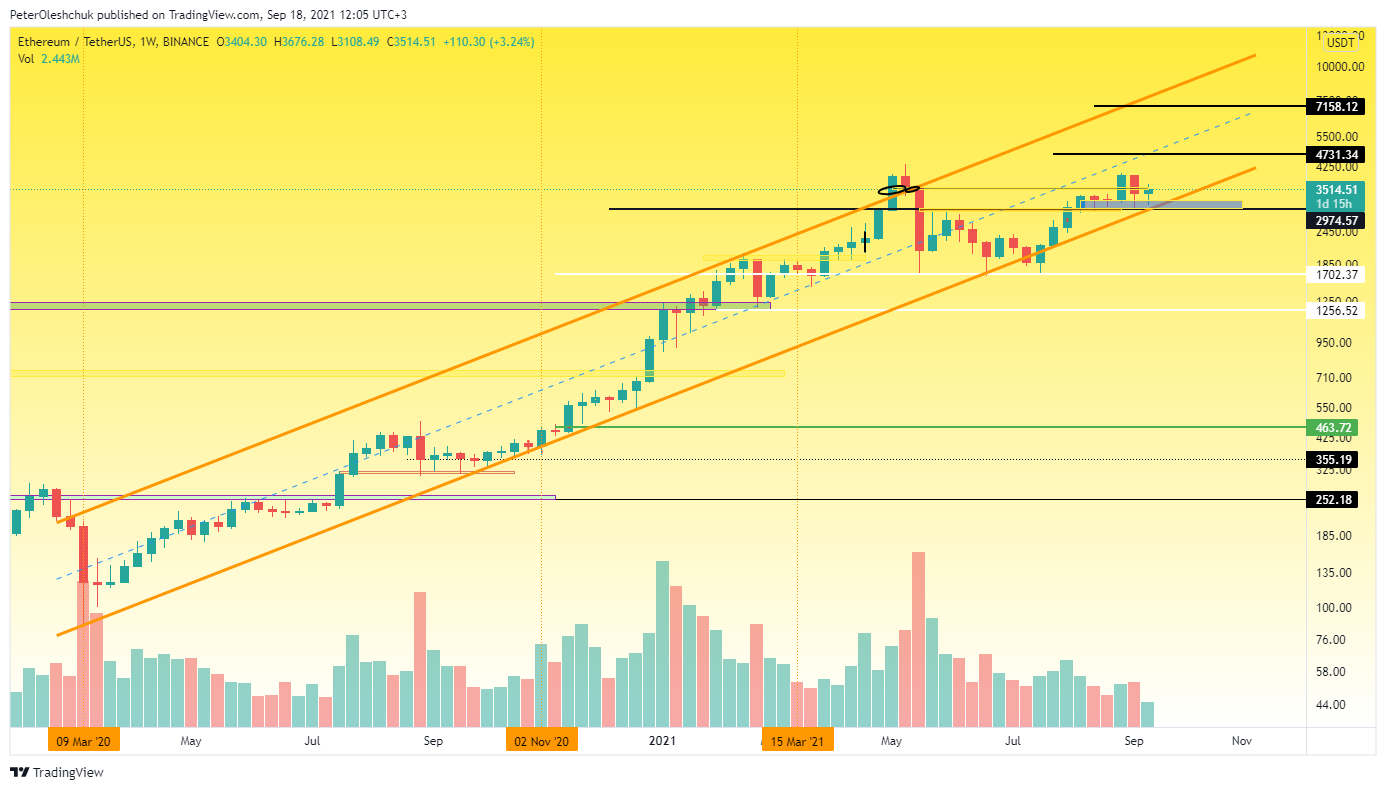 ETH trading week in the market ends with another attempt by sellers to push the price below the $3000 mark. However, if you compare the attempts of sellers last week — the situation now looks more in favor of buyers. Of course, there is a whole day left until the closing of the weekly candle. We know that not one day but one hour is enough to change the situation on the cryptocurrency market.

Though, the situation now on the weekly timeframe looks clearly in favor of buyers. The weekly candle has a very high chance of closing above the opening price. ETH sellers were unable to update the previous week's local low. Trading volumes during this week were almost two times lower. Given that the initiative in the market belongs to the sellers as the trading volumes indicate a weakness. Therefore, if buyers can close the weekly candle in such a position. Then, in a day, there will be no abrupt abnormal changes in the market — we will expect the historical high update by the end of the month.

Technical Analysis of ETH on the Daily Timeframe 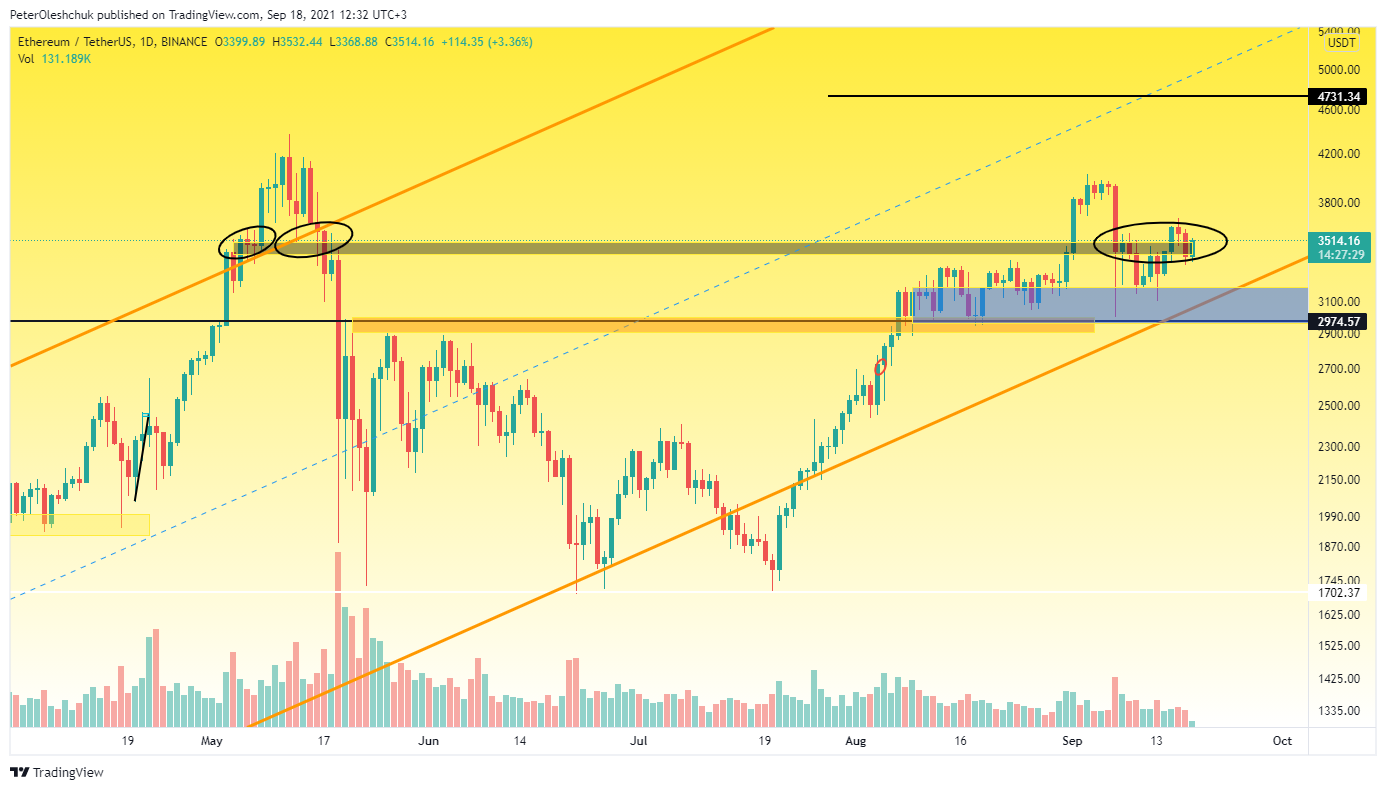 Analyzing the daily timeframe, we see that buyers are trying to regain control of the $3500 range. In the chart, we showed that it was after the failure to fix above this range in May, the ETH market sharply collapsed. In addition, on 7 September, it was in this range that the daily candle, which had a high trading volume, closed.

Therefore, by taking control of the $3500 mark, buyers will secure another local foothold to continue their growth with the target of $4731. During the previous two days (16 and 17 September), sellers tried to break the local growth wave that buyers began on 11 September. Although this growth still looks rather weak. Moreover, sellers have not yet been able to show their dominance in this price range. Thus, the continued growth of the ETH price is our main scenario.

ETHBTC Price One Step Before the Correction 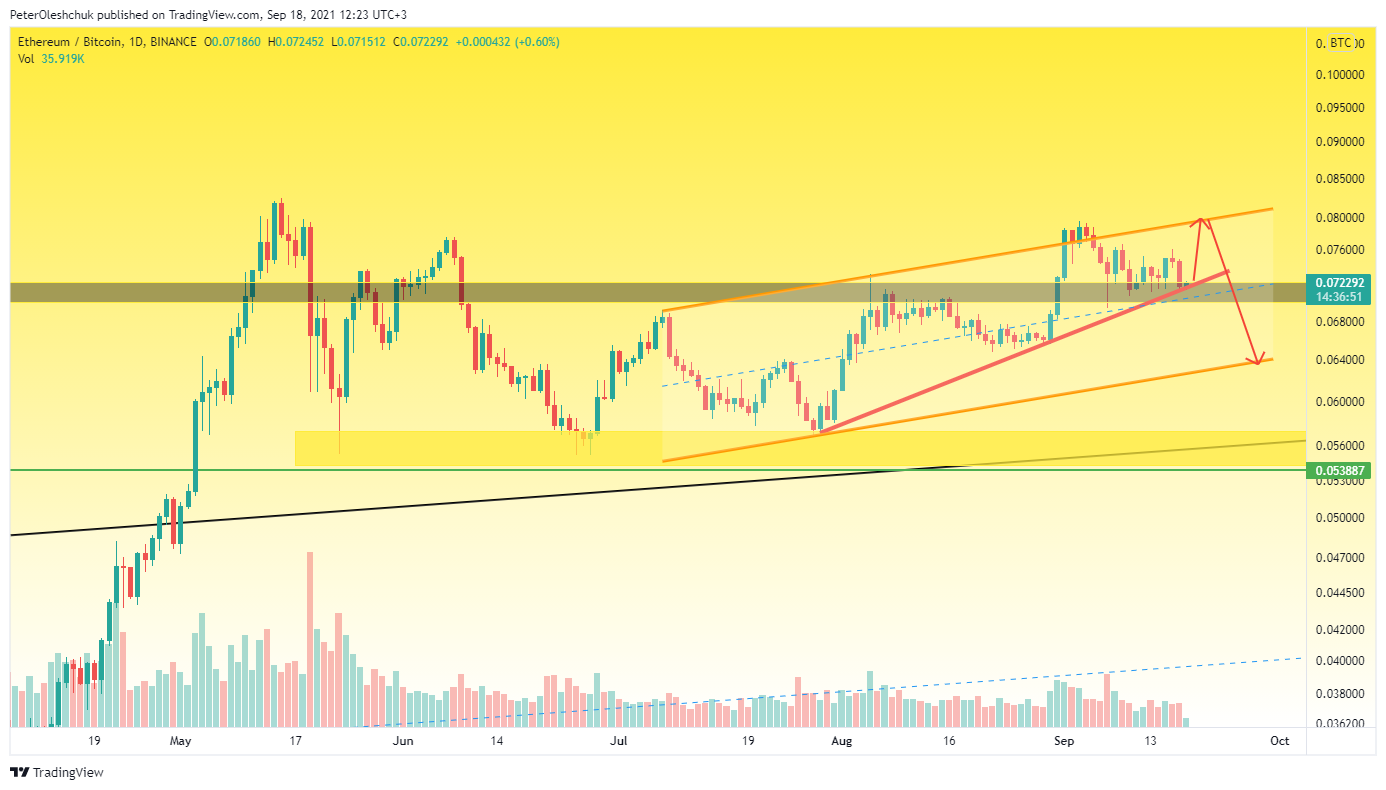 However, it is not worth wearing pink glasses and expects a powerful bull run. Looking at the daily chart of ETHBTC, we see that the price is moving within the orange growth channel. Also, there is now a local growth wave within this channel, which buyers support with a red trend line. Updating local highs is becoming a challenge for ETH buyers.

Therefore, we expect another local growth wave, after which a deep correction in the ETH market will begin. And, the fact of the historical high update will not serve as a signal for active buying, on the contrary.