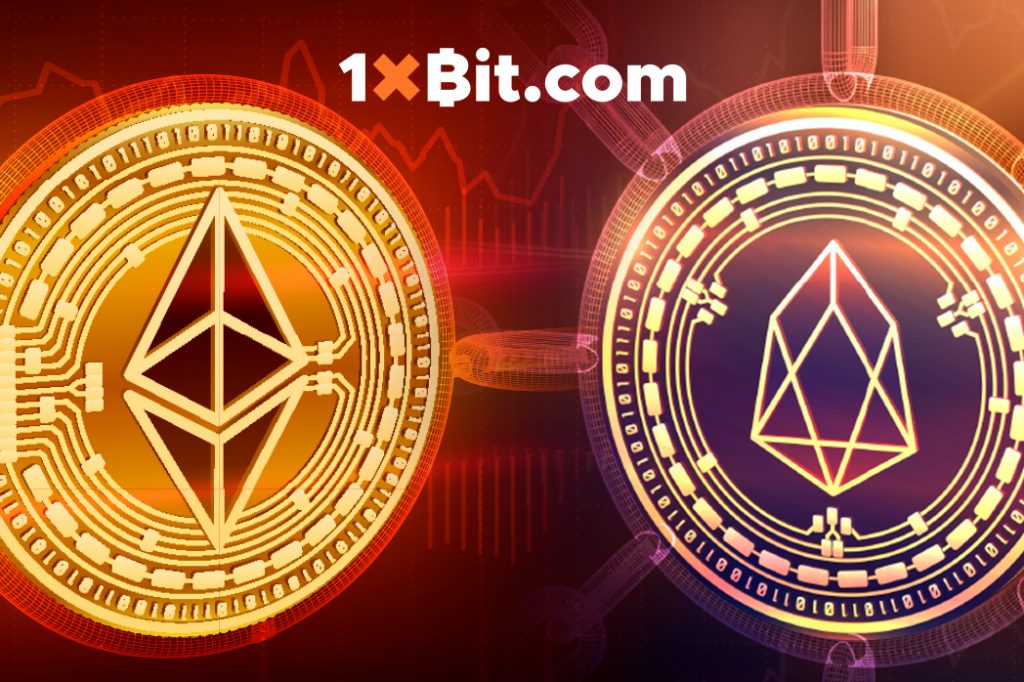 Ethereum and EOS are very similar in that they both support the building of smart contracts and DApps. However, they have their unique characteristics. Ethereum is the second-largest cryptocurrency by market capitalization after Bitcoin. This makes it a very top cryptocurrency on the ranking.

It is the project behind the famous DeFi, which has become a huge industry lately due to its booming business. For this reason, Ethereum’s transaction fees have soared significantly. As Ethereum uses the Proof-of-Work (PoW) consensus algorithm to verify transactions, the miners are forced to increase their fees, which is what led to an explosion in gas fees. This has made Ethereum transactions extremely slow, as the blockchain is usually congested.

EOS, in turn, is the 14th largest cryptocurrency and is second to Ethereum in terms of smart contracts and DApps. It uses the Delegated Proof-of-Stake (DPoS) algorithm to verify transactions as opposed to Ethereum’s Proof-of-Work. The network boasts of fast transactions with little or no fees, a strength that Ethereum can no longer boast of. Some people have argued that the DPoS algorithm is not as secure as PoS, which makes the network more prone to a 51% attack.

Difference Between PoS and DPos

There are major differences between the consensus algorithms used by Ethereum and EOS. To start with, one requires the mining of the cryptocurrency, while the other only needs validators to stake their cryptocurrency holdings as all the coins are pre-mined.

In PoW, miners have to verify transactions using complex mathematical procedures that can be energy consuming and require sophisticated equipment to carry out. They then arrange the transactions in blocks, after which they are rewarded with new coins, thus introducing more coins into the circulating supply. Apart from Ethereum, other cryptos, such as Bitcoin, Litecoin, Bitcoin Cash, and Monero, use PoW. Ethereum is, however, considering migrating to Proof-of-Stake, another consensus algorithm that is more similar to DPoS.

In contrast, the DPoS algorithm is a democratic way of securing the blockchain by ensuring that transitions are represented. It is a consensus algorithm developed by EOS founder – Daniel Larimer. This method uses voting and election to secure the blockchain and keep it decentralized to avoid abuse of the system. Transactions are validated relatively quick, which is why EOS executes fast transactions with very little or no fees. Other cryptocurrencies that use this consensus algorithm include Lisk, Waykichain, and BitShares.

As time goes on, new methods of validating transactions may emerge that are more efficient and more cost-effective. PoW, for instance, costs a lot and uses a significant amount of electricity to work. DPoS, though not as expensive, is also quite vulnerable, as only a small number of people (about 100) serve as validators because they have the highest stake in the community.

Ethereum VS EOS: Which is Better for Betting?

Despite the stable popularity and high demand of both crypto coins, EOS is thought to be replacing Ethereum on different platforms, including online casinos that offer blackjack, roulette, and other games of chance powered by cryptocurrency. In comparison to Ethereum, the most top DApps hosted on EOS are either labelled as “gambling” or “high-risk” platforms. Only 8 percent of Ethereum‘s most-used DApps wear that label. As a result, the visible migration of gamblers to EOS from Ethereum has brought 70% of the $5.5 billion transacted on EOS and spent on betting DApps.

READ  Why Couldn't Crypto Industry Live Up to Its Promise Amidst Coronavirus Spread?

In addition, EOS processes transactions faster and at no cost, which makes it an ideal cryptocurrency for betting. 1xBit is one of the crypto casinos on which EOS can be used to play games and bet. The company has expanded and now has more than 25 cryptocurrencies available for players on the platform, including ETH and EOS. 1xBit offers a 7 BTC welcome bonus after completing a simple registration and several depositings. The account created supports multiple currencies, and you can play and make bets completely anonymous. Also, you can easily withdraw your wins at no charge.

Overall, both smart contract platforms have their unique features, and we should take into account each of them in order to make a very well thought out decision about what is most advantageous for each of us.