Bitcoin fan club gained another renowned member this year, only this time, it’s in the form of an ex-senior government entity. Michael Morell, former acting director of Central Intelligence Agency (CIA)  has come forward with more than just a positive stance but a comprehensive paper commissioned by the lobbying group Crypto Council for Innovation. In doing so, Morell has conclusively contradicted the traditional view of Bitcoin that once predicted the BTC’s use to the confines of the dark and illegal activities.

The massive interest along with the matching size of investment at the hands of institutions was definitely the highlighting point of the year along with BTC breaking new highs all the way until it broke 60k. However, the crypto community was, or rather is still lacking recognition from governments and the officials representing them. Undeniably, in the past, governing bodies around the world including nations like India and banking institutions like JPMorgan Chase were more than willing to bash the concept of cryptocurrencies altogether.

Moreover, the light focused on the incidents revolving around the involvement of BTC in mainstream scandals like the Silk Road, directly contributed more power to the statements that no longer hold any relevance. However, Morell’s well-researched take on the world’s first cryptocurrency directly stands against the alleged claims, like that of the Treasury Secretary Janet Yellen about the currency’s use in criminal activities.

Morell expressed his surprise at the conclusions he conceived at the end of his research, in light of his initial assumptions of considering the judgments of figures like Secretary Janet Yellen and Christine Lagarde, President of the European Central bank. However, for those that are fine-tuned with the working and the very vision behind the existence of Bitcoin, Morell’s findings are more of concrete support than clarification.

“In fact, there was probably less illicit activity in the Bitcoin ecosystem than there is in the traditional banking system.”

Morell’s findings factually contradict the long seen view of Bitcoin’s participation in illegal activities. According to the report from Chainalysis, the percentage of illicit transactions in crypto is below 1% and is further going down. Furthermore, in the same context, Morell estimates illicit transactions through the traditional system lies between 2-4 percent of global GDP. 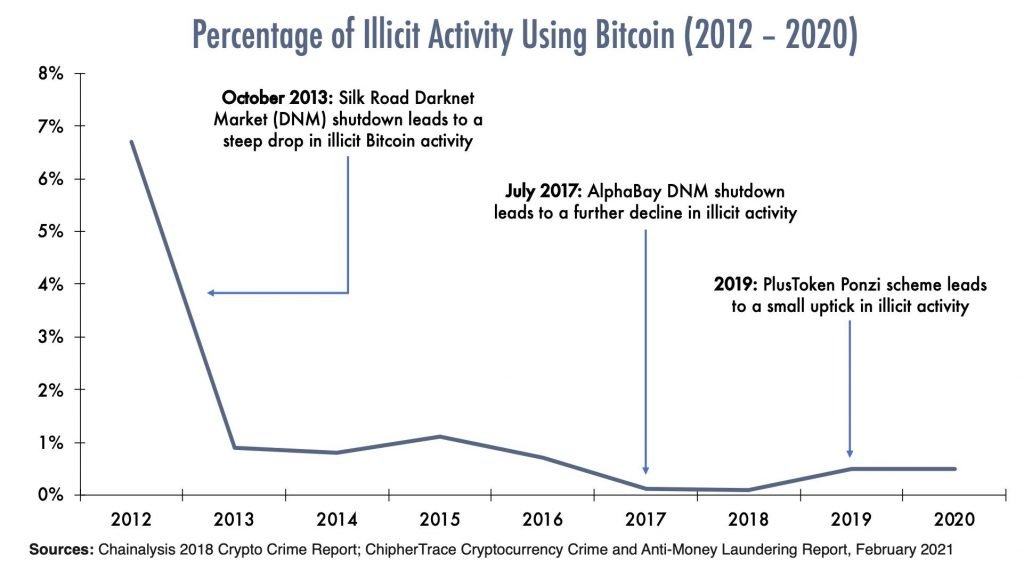 Blockchain- End Of The Paper Trail

In his research, Morell was particularly taken by the potential that blockchain technology holds in tracing the trail that follows in the covers of illicit transactions. Impressed by the abundance of possibility following the integration of different tools like Artificial Intelligence (AI) with blockchain technology, Morell expressed,

“literally blown away by how they find illicit activity…this is great intelligence work.”

Where following the paper trail while tracking illegal transactions is an age-old process, practiced rigorously by security services like the FBI, Blockchain has effectively proven itself as a better alternative. Even though it’s a timeworn practice, following paper currency especially to uncover illicit threats and activities doesn’t hold much success rate. Where tracks of the traditional currency are easy to blur or even erase from the system, records on a blockchain are immutable and everlasting. It is without a doubt that tracking transactions and activity on blockchains would be a far more efficient and productive alternative to the conventional methods being followed endlessly with complete ignorance of the benefits and advanced features of blockchain technology.

While Bitcoin has undeniably grown in value, awareness, and potential in the recognition of the asset as a successful investment has led to massive institutional participation. And while nations like Singapore are coming along with their Sovereign funds and India’s recent calibrated stance predicts further growth in the future for the crypto market, Morell’s findings and understanding of the potential and power of cryptocurrencies and blockchain technology has truly been a much-needed myth-buster against the alleged charges on Bitcoin. While several including Peter David Schiff and Warren Buffett have come on board despite their conflicting opinions in the past, the true success for Bitcoin and other cryptocurrencies lies in proper education and awareness among the masses.