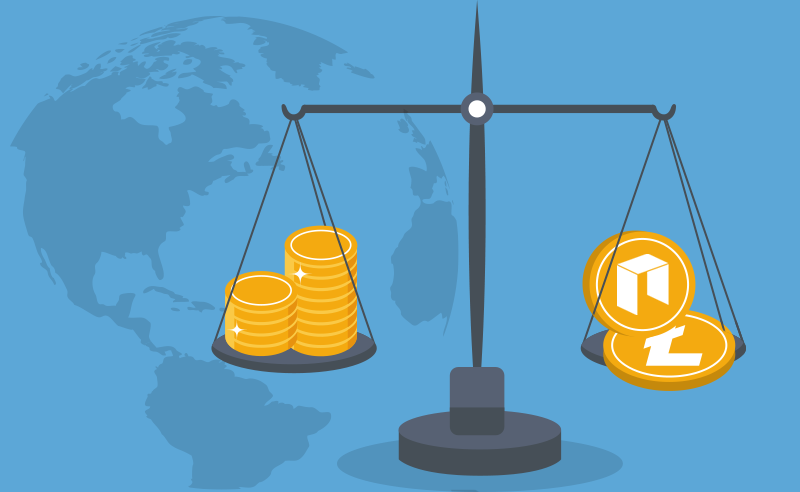 Cryptocurrencies have put everyone in amazement from the time they were introduced to this world. These digital assets have the potential to replace the fiat currencies we use today. Cryptocurrencies were created to provide a system that would eliminate the third-party between transactions. Bitcoin is the first cryptocurrency ever. Although Bitcoin was successful in providing a decentralized digital payment system, it was not fast enough, and privacy was not far effective. After some years, Litecoin came which managed to improve its transaction speed and privacy issues. Besides this, NEO was introduced, which combined the features of both Bitcoin and Ethereum. In this article, we will discuss how NEO and Litecoin set apart from other cryptocurrencies.

NEO is a blockchain system which is powered by either the GAS or a NEO token. Both these tokens have the ability to provide seamless execution of transactions across the decentralized system of NEO. NEO GAS token acts as a fee to approve a user in its blockchain network. The blockchain makes use of smart contracts and DApps just like the Ethereum network. In addition to these features, NEO takes its features from the Bitcoin blockchain network also. Thus, NEO is a combination of both Bitcoin and Ethereum.

Litecoin is a P2P digital currency which was introduced to make the transactions faster and more anonymous than Bitcoin. The blockchain network of Litecoin utilizes a consensus algorithm called Proof of Scrypt instead of Bitcoin’s Proof of Work, which offers more security amongst the transactions between the two parties.

How NEO Is Different From Litecoin

Both NEO and Litecoin are altcoins or alternative coins to Bitcoin. While NEO was designed while keeping Ethereum in mind, Litecoin was introduced to improve the decentralized digital system of Bitcoin by making it more fast and anonymous. The transaction time of Litecoin is four times faster than that of Bitcoin. On the other hand, NEO was introduced to provide a system that would make use of Ethereum smart contracts and DApps in a more efficient way. NEO has the ability to confirm 10000 transactions within a second, whereas Ethereum can confirm only ten transactions within a second.

Is Litecoin A Good Investment

When it comes to investing in Litecoin or any other cryptocurrency, it is essential to consider whether you are spending your money for a long-term or short-term. Now, I will discuss the merits and demerits of long-term and short-term investments in Litecoin.

Merits Of Long-Term Investment In Litecoin

READ  What are Cryptocurrencies and How Do They Work?

Demerits Of Long-Term Investment In Litecoin

Litecoin has some scalability issues. Due to this, its blockchain system would lose its speed when the number of users increases. This is the only demerit which Litecoin has for long-term investment.

Merits Of Short-Term Investment In Litecoin

Demerits Of Short-Term Investment In Litecoin

Is NEO A Good Investment

From recent years, NEO has been performing very well. It has become very popular in a short period of time because the Chinese government supports it. Now, we will discuss the merits and demerits of long-term and short-term investments in NEO.

Merits Of Long-Term Investment In NEO

Demerits Of Long-Term Investment In NEO

NEO is facing stiff competition with other cryptocurrencies that deal with smart contracts, particularly Cardano. These cryptos are somehow performing well and could beat NEO in the future.

Merits Of Short-Term Investment In NEO

Demerits Of Short-Term Investment In NEO

NEO is a cryptocurrency that is mainly focused on long-term investments. Its smart contracts and DApps offer more profitability to its investors in the long run. However, a sudden surge in price for a short-term could be beneficial.