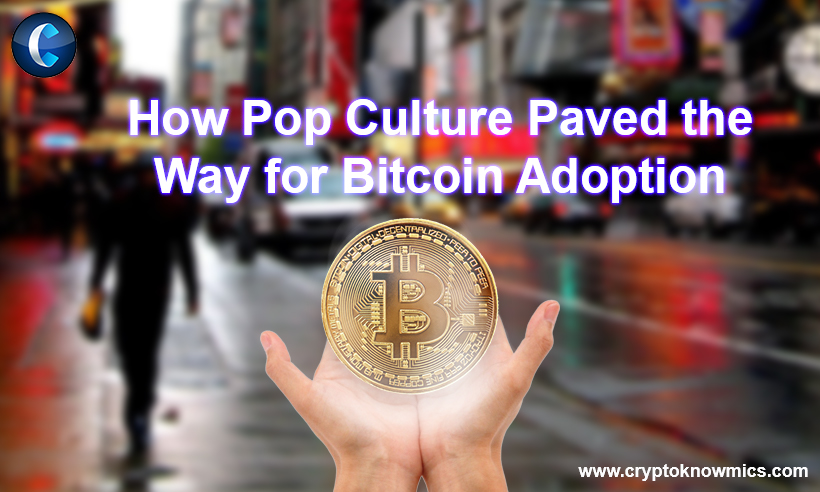 How Pop Culture Paved the Way for Bitcoin Adoption

For years we have been struck with the motion of influence and impact spreading over with the fast adoption of bitcoins in the daily lives of people across the globe. It comes as a shock to us many that it has been hardly over a decade when the world was taken by surprise with revolutionary technology, blockchain underpinning the first ever cryptocurrency Bitcoin and the penetrative impact of the network in financial routines of the industry as well as the individuals associated with it.

A waking thought still hops in the head that any trend or cultural adoption (no matter which industry it is majorly connected to) by the masses is not the result of just one individual niche of advertisers. Moreover it’s actually the doing of mass cultural references and promotion by various mediums and their featured ideas to keep the audience in tab with the global trending events. Pop culture and bitcoins to the global extent have the same relationship in the process of growth and awareness. To many people’s shock, it seems to be a little hard to understand the correlation between pop culture and bitcoin, considering the difference in the industry and the respective audience they cater, but it has just been a matter of enthusiasm and awareness of the industry leaders to integrate the two, resulting in the global adoption of the crypto network.

Pop Culture aka popular culture covers and impacts the interests of many through the regular mediums of social media, movies and TV shows, art culture, songs etc and their artist being the influencer of the trend on a mass network leading their faithful followers with them. From famous movies featuring bitcoins and blockchain technology with their cinematic work to artists like Eminem name checking the first ever cryptocurrency in his song ‘Not Alike’, and with Netflix featuring a documentary on cryptocurrency in its most viewed playlist, how can we dare say that pop culture has nothing to do with the global impact and adoption of bitcoins.

The power of pop culture has been long due for appreciation but here the animation and TV shows that have been the loyal advocates in keeping up with the crypto trend.

Undoubtedly, the longest running animated TV shows of all time, the Simpsons have not only gained its reputation in comically showcasing predictions of the future which have been quite precise at times, but have also referenced the encrypted world of bitcoins several times in the show’s 31 years run-

This episode has subtly mentioned bitcoin in a scene when lisa runs into Krusty the Klown and mentions to him of being broke to which he replies – ‘ all it takes is some bad luck at the ponies, worse luck in the bitcoin market, and heavy investment in a high-end bookmark company’. Nifty right!

Simpsons has undoubtedly given the most creative references with small details or posters in the background. One of which caught our cryptic eyes. In this episode, the notorious corky james “Jimbo”, the high school bully has been featured in a billboard ad, demanding lunch money with “ACCEPTING BITCOINS” mentioned below in block letters. Not exactly the best use of bitcoins exchange but it’s nice to see things changing with time even if it is bullying.

In all seriousness, this episode is the mother of all time in dedicating screen time to cryptocurrency within an animated show, with Jim Parsons from big bang theory appearing in a dance segment with a catchy song explaining cryptocurrency and blockchain. How cool is that.

Yet another beloved american animated sitcom running for over 2 decades played its role in the adoption of bitcoin when during one of the episodes lois states her concern over their monthly savings to which peter griffin to our surprise mentions bitcoins, given his less than average intellect, but he does speak to quite a length about bitcoins and its potential as a safer asset.

Long running TV shows such as both family guy and Simpsons even with their comical setup to the entire series, proves the adoption of trends ranging form music culture to financial sector and the role they play in subtly including them in their content.

Moving on from animated shows, some of the well renowned TV shows also played their part especially during the time when bitcoins price surged to its highest point of all time in 2017, including big bang theory and grey’s anatomy.

In the winter finale of 2017, grey’s anatomy brought attention to cyber crime associated with bitcoin trade. The grey Sloan medical hospital was targeted with cyber crime taking over the hospital servers and medical records of the patients in exchange for quite a sum of bitcoins as ransom, valued at about $20 million at the time when the episode was aired.

In the season 11 of this comedy series, the producers dedicated an entire episode to bitcoin when its value reached $10,000. Although the plot line of this episode revolved entirely around bitcoin, there were many loopholes and factual information that hardly fell under accurate. Still it is still considered as an influential moment for the large number of audience watching the show.

Yet another TV show in a comical set of storytelling, apparently are big fans of bitcoins since they featured several episodes related to cryptocurrency in the season 5 of the five year run of the show, focusing extensively on ICO’s and bitcoin’s benefits. Majorly Gilfoyle’s explanatory power point presentation on cryptocurrency may just be the most precise run time given on television.

With the run of these amazing TV shows and the writers who excelled in contributing to the cryptocurrency in their script, there are uncountable others who definitely deserves a name check here including The Good Wife, Startup, Mr. Robot, Billions and many others who didn’t fail our expectations to keep up with the changing trends and didn’t miss to include them in the storyline and set the tone for a wide range of viewers.

The impact that pop culture has on the public does trigger an incredible amount of conversations and shape the mass opinion in its wake and that’s exactly what we look into when analyzing the influence of the movie plot lines, projecting awareness and a creative angle to the story. There are movies out there entirely based on the real life incidents and fictitious plot lines revolving around bitcoin and cryptocurrency.

Probably the most important mention in the list of movie plot lines dedicated to cryptocurrency, the 2015 film, dark web sheds light on the trial of the alleged creator of the online black market, silk road running an entire online drug market on bitcoin exchange. The famous movie narrated by Keanu Reeves investigates the controversial inspection by FBI over the Ulbricht case and talks about the development of a decentralized encrypted internet.

Yet another Hollywood masterpiece who didn’t forget to feature bitcoin in its plot line speaking towards the common misconception of the relationship between bitcoins and anonymously practiced illicit dealing associated with it.

Another masterpiece from the works of anime that deserves a prize in attention to detail and credibility towards the content designed into the movie for the bitcoin reference that couldn’t be missed in this marvel movie. The digital news billboard running news of the tragic death of Newyork’s hero also gave a shout out to the volatility of bitcoin featuring ‘Bitcoin Hits New High’ and ‘Bitcoin Hits New Low’ side by side.

The promise that these film works have kept by indulging in the details with popular culture trends deserves thousands of applaud for the contribution in shaping the masses opinion. Some of the other films that also followed similar suit include Deadpool, Crypto, Virality and many more in the long list.

Pop culture with the spread of digital media is responsible for shaping the opinion of public on a variety of trends and events taking place around the globe through a number of medium around which the lives of the billions revolve for information as well as entertainment for pretty much anything, everything and everywhere lead by influencers traditionally known as industry leaders and experts in the professional world. With credible sources directly in touch with millions at a time, it is quite safe to assume the level impact resonating on the followers of these leaders, so why doubt the same when concluding the role of pop culture in paving the way for bitcoin adoption.