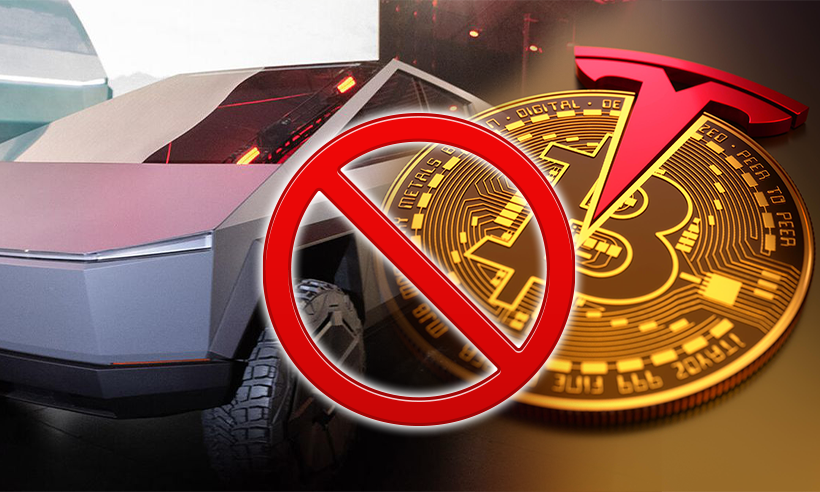 Several Tesla Cybertruck customers are reported to nullify their pre-orders as soon as the electric vehicle manufacturer announced the suspension of Bitcoin payments over environmental concerns.

Tesla Announced The Suspension of Bitcoin Payment Due to Environmental Concerns

Users have reported sharing the received apparent feedback from Tesla, that confirms the order cancellations, on Twitter. However, investors were seemingly disturbed by Tesla’s decision to cancel Bitcoin as a mode of payment. It is yet not clear if the firm had made their reservations in Bitcoin or fiat.

One of the users stated

“Tesla’s decision on bitcoin was misinformed while blasting Musk for double standards. The CEO of Tesla is promoting altcoins in public but claiming bitcoin was ideal,”.

Elon Musk’s announcement concerns the issue of EV manufacturers no longer accepting Bitcoin payments as the increasing use of fossil fuels for mining and transactions is an unexpected move. However, according to Musk, cryptocurrencies are not a bad idea to invest in. The statement from Musk reads;

“Cryptocurrency is a good idea on many levels, and we believe it has a promising future, but this cannot come at great cost to the environment. The company was looking at other cryptocurrencies that consume less energy.”

“The company would not sell any Bitcoin and will resume using the cryptocurrency for transactions as soon as mining transitions use more sustainable energy.”

To justify the decision of the company, Musk stated that “Bitcoin power consumption has skyrocketed in recent months, hitting 148TwH as of May 10. Tesla’s initial decision to accept bitcoin was a boost for the cryptocurrency.”

Notably, Musk has been an important link to the Dogecoin rally. In a sketch on when he hosted the “Saturday Night Live”  show, Musk expressed his admiration for dogecoin as well as through several tweets. That incident resulted in a surge in the price of the meme-coin.