With Bitcoin’s price breaking new records every day, and imminent personalities from every industry going bullish towards Bitcoin, predictions have been raining over Bitcoin and other cryptocurrencies. Bitcoin’s bullish nature has made some powerful minds to change their opinions regarding the world of digital currencies. And the first in line is the investment banking giant JPMorgan Chase. JPMorgan recently made a bitcoin price target prediction of over $146,000. This prediction is based on the assumption that cryptocurrencies will gain immense popularity in the years to come, and Bitcoin will soon become an alternative for gold.

Strategists led by Nikolaos Panigirtzoglou wrote in a note earlier this week:

“A crowding out of gold as an ‘alternative’ currency implies a big upside for Bitcoin over the long term. Bitcoin’s current market capitalization of around $575 billion would have to rise by 4.6 times – for a theoretical bitcoin price of $146,000 – to match the total private sector investment of gold via exchange-traded funds or bars and coins.”

This is not the first time that JPMorgan Chase made a prediction about bitcoin’s price. In December 2020, the multinational investment bank in the U.S. believes bitcoin’s price can soar to $650,000. In November 2020, when institutional investors started to turn more towards Bitcoin, rather than gold, JPMorgan made a similar prediction saying that this could result in a 10x surge for bitcoin. 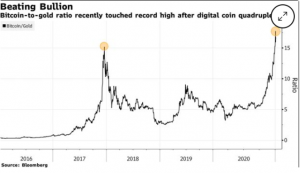 Analysts have commented and argued Bitcoin’s price volatility is something that might come in the way of this target. The price volatility needs to drop so that more institutions can make large allocations. “The convergence of bitcoin and gold volatilities is a multi-year process” and suggests that the $146,000-plus target is a long-term objective,” JPMorgan noted.

While big investments are coming in, and the crypto traders are expecting the price rally to continue, JPMorgan sees signs of “speculative mania,” and future gains towards the region of 50,000-$100,000 may be unsustainable.

JPMorgan’s Change in Opinion About Bitcoin

The major U.S. financial institution was always not bullish towards Bitcoin and other cryptocurrencies. It was against the entire concept of Bitcoin. However, with the bullish nature of Bitcoin, the banking giant has not only started to support Bitcoin but also provided banking facilities to major crypto exchanges like Gemini and Coinbase. It has also launched new units for blockchain and digital currencies. Nikolaos Panigirtzoglou accepted that institutional investors have a huge role to play behind the ongoing increase of bitcoin’s price.

JPMorgan is not the only one. During the last few years, the investment market has changed vividly in favor of Bitcoin. Investors believe that cryptocurrencies have the potential to give complete financial freedom to people. Security and Exchange Commission (SEC) Chair Jay Clayton, too changed his opinion regarding Bitcoin. He earlier stated that the Bitcoin trade depended on unregulated markets, and therefore, the SEC cannot be sure about affecting or manipulating the price of Bitcoin. Now he has a different opinion on Bitcoin saying that the current payment mechanisms have various inefficiencies, and that is the reason Bitcoin is on a bull run.

What Led to this Change in Opinion?

Many investors have admitted that they were wrong about Bitcoin earlier but have now inclined towards Bitcoin or other cryptocurrencies. So, what led to a change in opinion? Bitcoin is on an upward trajectory and investors are taking notice. Nick Maggiulli, the chief operating officer at Ritholtz Wealth Management and author of the “Of Dollars and Data” financial blog, wrote in an article:

“Now that bitcoin has survived (and thrived) beyond its 2017 peak, many investors who used to see it as a joke are now realizing it isn’t one. I am one of them.”

He also wrote that non-Bitcoin traders who were not ready to invest in Bitcoin earlier, until its price dropped to $1000, are now ready to buy Bitcoin even at $10,000. Every time the price of Bitcoin goes further high, this minimum price margin for investment will also increase. You might argue that it seems likely impossible because Bitcoin has an intrinsic value. But so does gold. Therefore, if you are arguing against Bitcoin, you have to argue against gold.