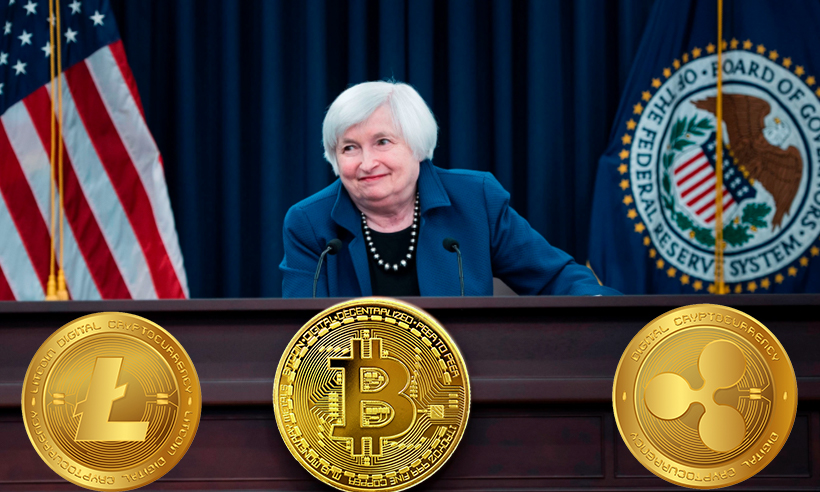 Janet Yellen Clarifies Her Take on Cryptocurrency with a Written Testimony

Janet Yellen, the U.S. President Joe Biden’s pick for Treasury Secretary, has clarified her stance on cryptocurrencies in writing. Earlier this week, the nominee for Treasury Secretary said during her Senate confirmation hearing, “cryptocurrencies are of particular concern,” especially when it comes to growing crimes that include terrorist activities.

However, in a written testimony that was released now, she has clarified that the “potential” of cryptocurrencies should be considered to improve the financial system.

What Was Yellen’s Statement Earlier?

Yellen’s oral statement on cryptocurrency came as an answer to the question from Democratic Senator Maggie Hassan about how some cryptocurrencies are actively being used to fund terrorism.

Hassan’s question was, “Can you outline some of these emerging technological concerns and how Treasury should combat new forms of terrorism criminal financing?”

And to this, Yellen replied, “We really need to examine ways in which we can curtail their use…”

The Clarity in the Statement with a Written Testimony

Janet Yellen’s stance on cryptocurrency only became clear now after she had got a chance to clarify her oral statement with written testimony. The Senate Committee on Finance submitted a question that asked:

“Dr. Yellen, what do you view as the potential threats and benefits these innovations and technologies will have on U.S. national security? Do you think more needs to be done to ensure we have appropriate safeguards and regulations for digital and cryptocurrencies in place?”

Yellen replied to this saying:

“I think it important we consider the benefits of cryptocurrencies and other digital assets, and the potential they have to improve the efficiency of the financial system.”

After it was noted cryptocurrencies are being used to a great extent for money laundering and terrorism activities, Yellen said that we have to encourage the use of digital currencies for legitimate activities and at the same time diminish their use for illegal activities. She also said that she intends to work closely with the Federal Reserve Board and the other banking and securities regulators, to ensure that a proper regulatory framework is implemented. 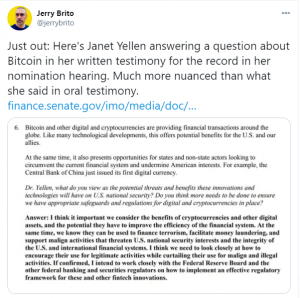 If Janet Yellen takes the chair of Treasury Secretary, she will influence the Financial Crimes Enforcement Network (FinCEN), a bureau that fights with money laundering and terrorism cases. And ever since America recently welcomed its 46th President Joe Biden, some of the top financial and regulatory institutions of the USA are having or at least giving a hint of having leaders who have good knowledge about cryptocurrencies and blockchain. There have been rumors of appointing the former Ripple board member Michael S. Barr as the head of the OCC. Chris Brummer also might be the next chair at CFTC. Brummer testified about cryptocurrencies and central bank digital currencies before the CFTC.