LTC Technical Analysis: It Is Important to Keep the $185-$200 Range for Growth

The last two trading weeks on the LTC market have been the most interesting in the last six months. After a powerful fall wave in May 2021, the LTC market was paralyzed. All the while, investors no longer saw active and sharp price movements. Trading volumes fell three times and the LTC price simply drifted for six months. All because the LTC market is in a protracted consolidation in the form of a triangle. The lower limit of this consolidation was formed by the global trend line of the growth channel. In this growth channel, the LTC price has been moving steadily since March 2020. The upper trend line was formed at local highs from May 2021. 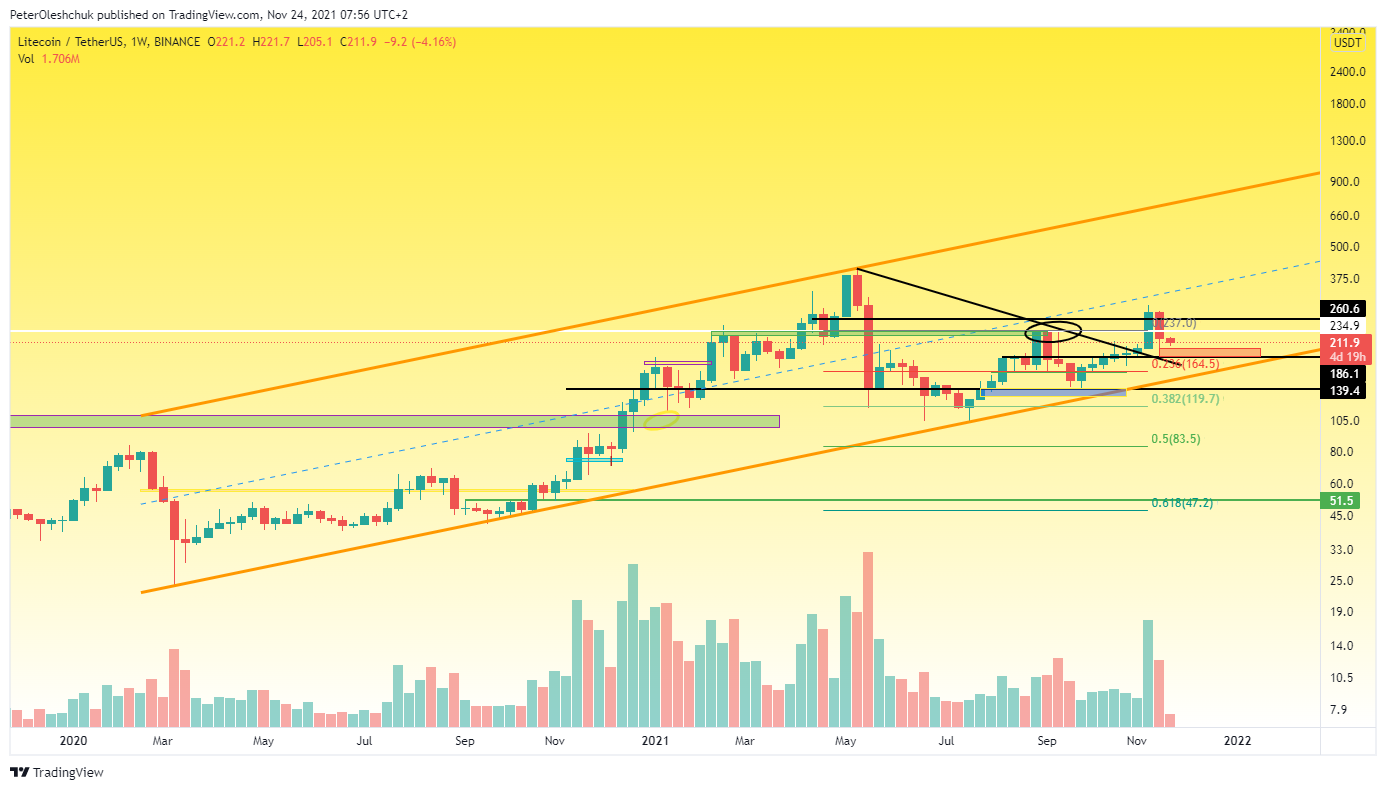 In the weekly timeframe, you can see a sharp revival of the LTC price since 8 November. It was during this trading week that buyers were able to break the upper limit of the triangular consolidation and show growth of 37%. The trading volumes with this breakdown increased as much as possible, which indicates a real breakdown of consolidation and the operation sellers' stop orders.

However, at the moment the LTC market is not so smooth. In the weekly timeframe, the next weekly candle was able to lower the price below the level from which the active growth began on 8 November. Sellers were unable to close the weekly candle so low. But, sellers have shown their presence in the market. For buyers to be able to continue the confident LTC price growth, they need to keep the range of $185-$200. If buyers buy up all offers of sellers in this range - the further movement of the price upwards will be easy and fast.

Technical Analysis of LTC in the Daily Timeframe 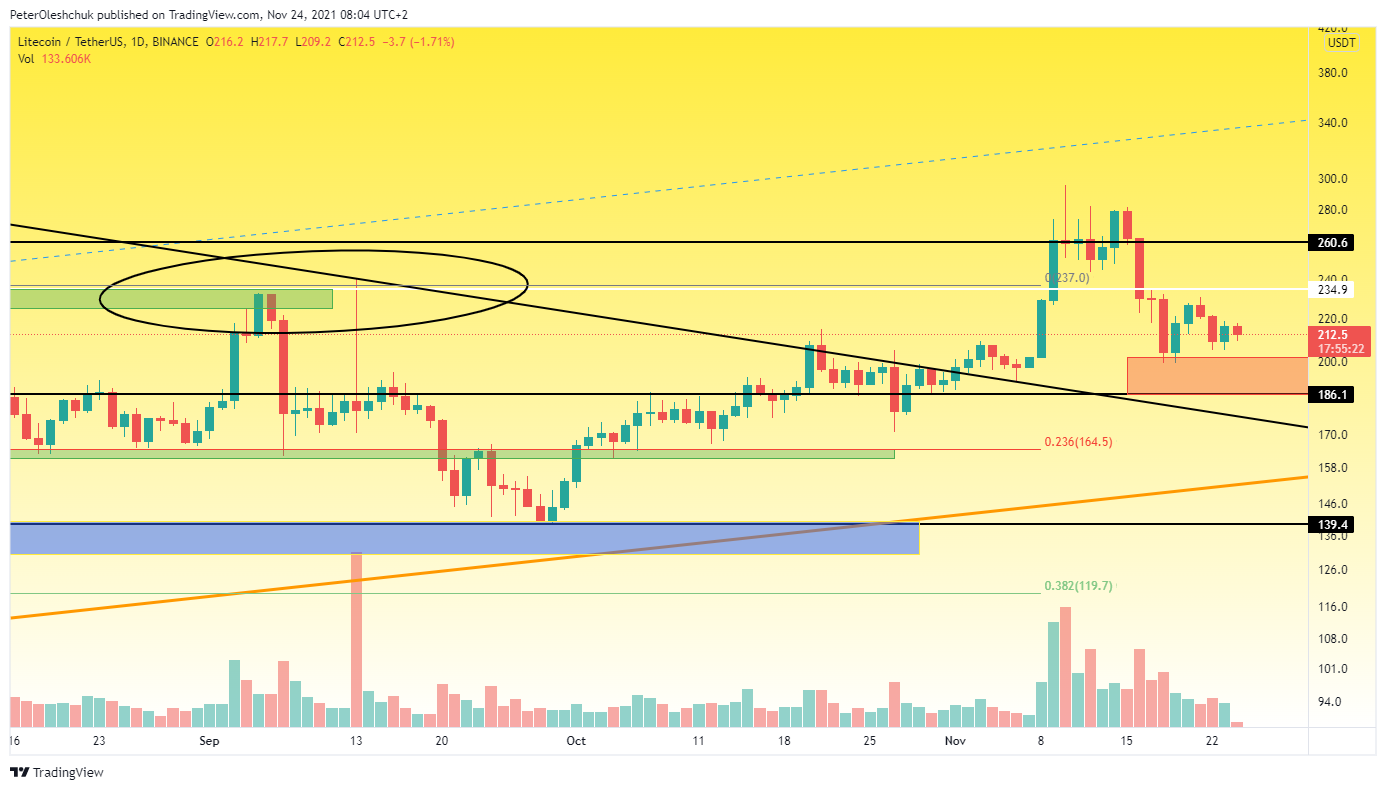 Analyzing the LTC price chart on the daily timeframe, you can see that the main blow to sellers struck from 15 to 18 November. At this time, the market was active sales. The BTC market, which provoked the fall, is partly to blame for this. At the moment, we see that buyers have slowed down the local fall wave and the price is suspended before the critical price zone of $185-$200. To be sure that the reversal of the LTC price will take place from this range, we want to see on the chart increased trading volumes and small candles with large pins down. In this case, it means a change in market forces and the weakness of sellers. 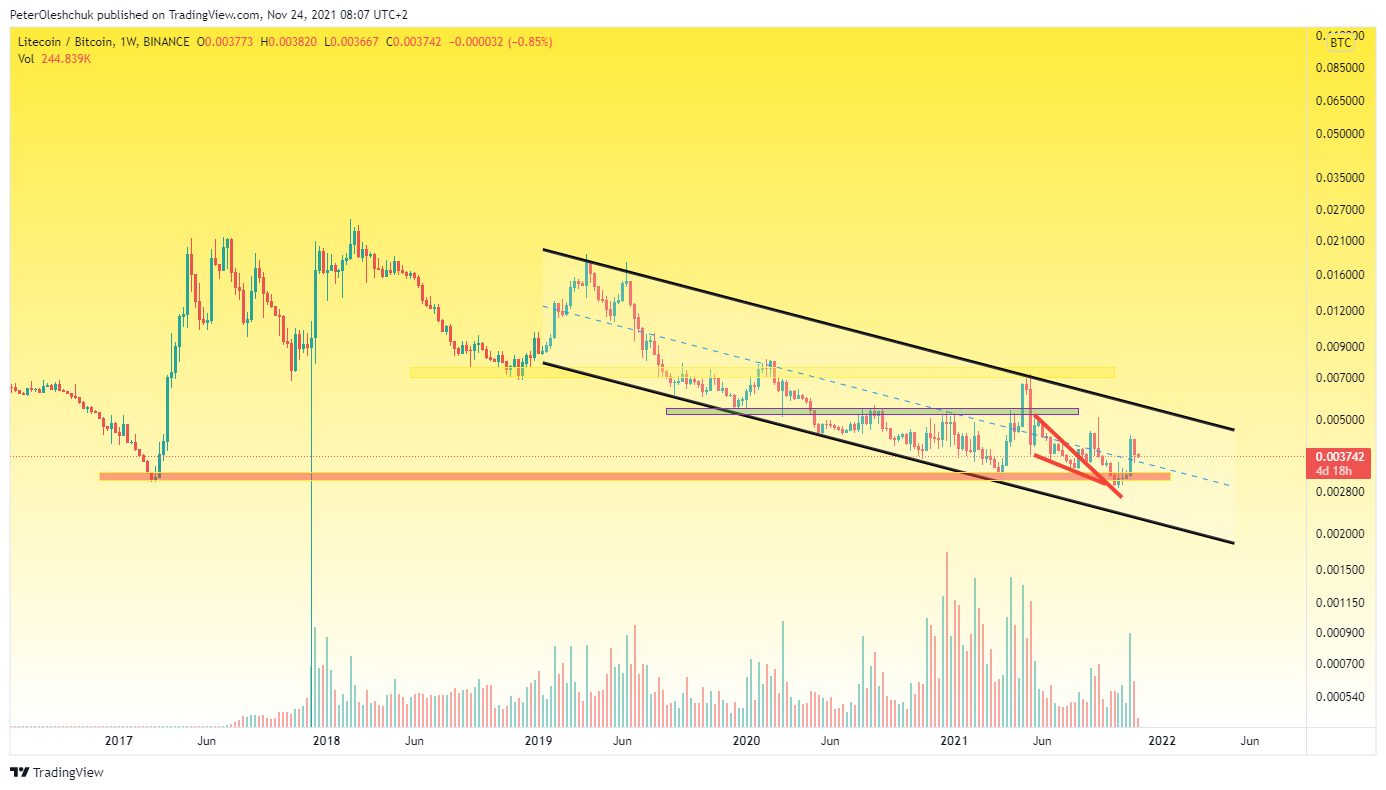 When looking at the global LTCBTC price chart, you can see that from 2018 sellers are confidently maintaining the downward trend. During the week of 8 November, the LTCBTC market recorded increased volumes. For the buyer's attempt not to be in vain, they now need to maintain control over the range of 0.003-0.0033. If they succeed, we will expect the LTCBTC price to continue to grow and the global trend line to fall.