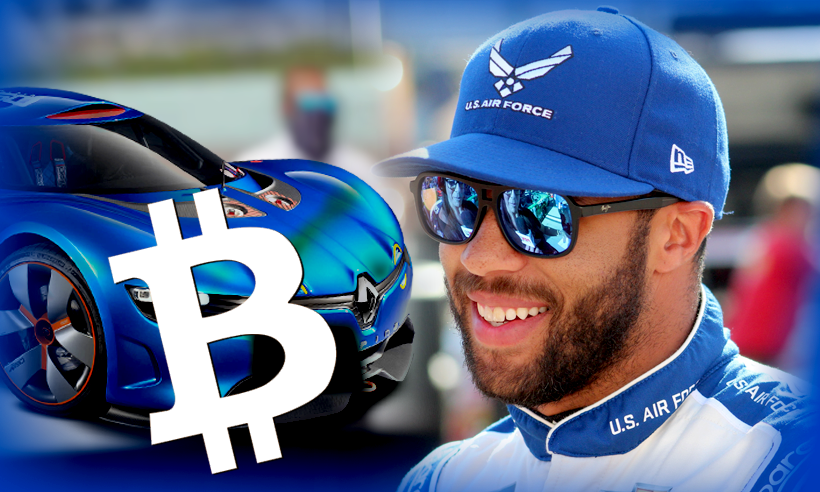 The only African-American driver in NASCAR series, Darrell “Bubba” Wallace, now would drive a car on the racing track with a Bitcoin logo on it.

On July 14, the CEO of Twitter Jack Dorsey has tweeted that Wallace’s car will have two Bitcoin logos along with Cash App’s logos painted on it.

Earlier, Wallace was only popular for his racing skills, but in June 2020, he gained national limelight after he successfully excluded the Confederate flag from the NASCAR’s event.

The NASCAR’s driver also made headline after he gets to know about the noose in his team garage, but later he realized that it was nothing but a door pull rope.

A few days later while targeting Wallace, the US President Donald Trump tweeted that it was because of his actions only, the ratings of NASCAR at that time came down.

However, it is to be noted that after the whole controversy, which involved Wallace, the ratings of NASCAR on FOX surged 8 percent.

As soon as the news of Wallace’s car with ‘Bitcoin logo and Cash App sponsorship’ was out, the social media flooded with a lot of positive comments. In fact, some of the users have predicted that this move could bring bullish trends for cryptocurrency.

Like other social media users, Reddit user ‘degentrader69’ also believes that this collaboration would be beneficial for Bitcoin. Regarding this, he also has predicted that by the end of the week the price of Bitcoin might reach $100,000.

One of the twitter users, ‘newmoneyFC’ tweeted that in the future, if the US President again tweets anything against Wallace, then the Bitcoin supporters would start a BTC protest buys, which could push its price to $20,000.