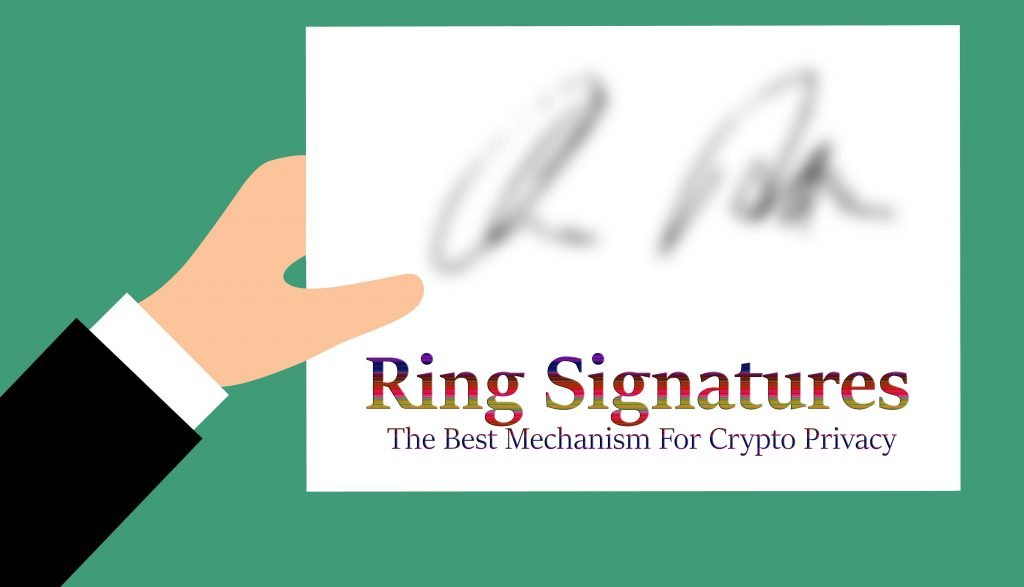 Privacy is the main concern for many users who use cryptocurrencies. It is one such pivotal factor that is given much emphasis. Privacy is the core issue for many significant developments in technology. People are inquisitive to know about its importance. Ring signatures, a notable technology, has been referred to in several cryptocurrencies that adhere to privacy concern.

Ring signatures are a kind of cryptographic digital signature that was founded by a team including Yalel Tauman, Ron Rivest, and Adi Shamir in 2001. The concept of ring signatures is somehow akin to group signatures. There is no simple method to track the real signer of the ring signature. The main objective behind the real concept of ring signatures to operate is revealing information that is private, most possibly, from government officials of high ranking. But it is done in such a smart manner via concealing the identity who has signed the message. Besides the real paper in advocating ring signatures, there is the participation of several effective resources and add on features to the mechanism.

In the year 2006, Koutarou Suzuki and Eiichiro Fujisaki presented Traceable Ring Signatures to upgrade some weaknesses present in ring signatures like misuse by signers who seem to be wicked or lethargic. The advanced version of a ring signature can be currently seen in CryptoNote coins providing complete privacy through provision where there can no possible methods to trace the sender in peer to peer transactions.

The method of Ring CTs (Ring Confidential Transactions) was taken into a discussion and was later being made functional by Gregory Maxwell, a Bitcoin Core developer in 2015. Ring CTs made it possible by enhancing the anonymity capacity of ring signatures and concealed the original amounts of the transaction between the sender and receiver, rather than perplexing the sender’s identity.

The best thing which you will notice in ring signatures is that they offer various public keys for checking. The word ‘ring’ itself indicates the meaning of various digital signatures forming a group to be used to signing a transaction. If you are abreast of blockchain education news, then you will understand that all this makes a ring that can be chosen on the blockchain from other users’ output.

Several elements initiate in building and keeping up the crypto network, offering complete anonymity for the user. Ring signatures and their successive effective support with Ring CTs are important to conceal identities of sender and amount of transaction across the network. By following the latest news on cryptocurrency, you will see that there has been much focus on privacy, that is accepted by cryptocurrencies. With more and more emerging innovative technologies running at an accelerated pace, it will be exciting to observe the sustainable development and results of these privacy-oriented networks. Now you know the worth of ring signatures.