Ripple’s Version of Reality vs Manipulative Allegations by the SEC

If there is a player in the crypto-space that can answer the SEC in its own language, it is Ripple.

This digital asset not only proved its potential by bringing low-cost, faster cross-border payments, but is the only one prepared for answering the SEC through their clarity in action that has been taken care of.

The people who always followed XRP believe that there is only the SEC model of reality popping out on platforms. And, if you analyze things logically, XRP has a much more powerful picture in support of the fact that XRP is a digital currency. Ripple’s CEO Brad Garlinghouse made this very clear through his statement below.

The statement from the CEO of the financial technology company reflects their confidence against the allegations leveled against XRP. He succinctly gave the message that WE, the XRP community, will confidently go through this introspecting phase.

READ  Ripple Has Asked Court to Dismiss a Lawsuit Against it 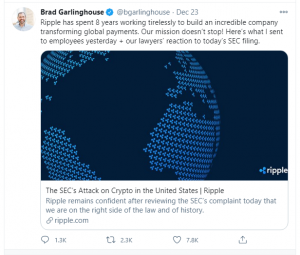 Now, let’s decode the allegations and answers provided by the SEC and the Ripple community respectively to get that reality check.

To understand the allegations as well as the reply, let’s examine the definition of “security offering” first.

The term security refers to negotiable financial instruments that hold some monetary value and represent ownership positions. Securities provide ownership rights to holders, and one receives a certain amount known as dividends for holding the security.

Now, if the SEC‘s allegation is correct and XRP is a security offering, then the token Holders must get a share of the profits or dividends along with ownership rights of the company.

Brad Garlinghouse clearly stated the terms of an “investment contract.” In the case of XRP, the XRP HODLers do not hold any share in the company and are not entitled to any rights on any profits or dividends. The purchasers of XRP receive nothing except the asset.

For sure, these claims by the SEC seem to be vague.

Another point that proved the validation of Garlinghouse is the market value of XRP in correlation with Ripple activities.

The value of XRP has always been related to the other virtual currencies, market movement, and demand rather than the movement of Ripple’s shares. They resemble the behavior of other digital currencies of the crypto-world. 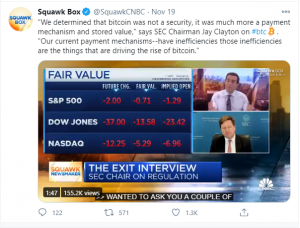 The manipulative allegations filed on the day, which is remarkably the end of the tenure of SEC Chairman Jay Clayton, are again something we should consider. Jay Clayton also admitted for the insufficiencies in the centralized finance systems, which reflects his change in opinion for the digital currencies in the crypto-space.

Undoubtedly, after the SEC filed charges against Ripple, there are people in the XRP community who are now giving XRP a second thought. But, if you are one of those who tends to focus on the positive side of the matter then one can expect that through this case, the whole crypto-community will get to know the clear rules of the game.

As XRP’s belligerent stance will carve the path for other digital assets of the market, the free-run that SEC has enjoyed with respect to its unclear and manipulative terms in the past might come to a permanent halt.

And this cold war has the potential to flip history.