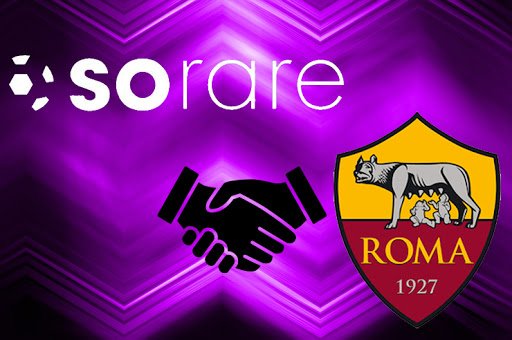 Italian Footballing Giants AS Roma has entered a partnership with Sorare, a blockchain gaming company. The deal would help AS Roma fans to acquire collectible digital cards which would be based upon the real-life performance of the club’s players.

Sorare is not like the other popular football fantasy games in the market even if its pretty similar in the game-play. It runs on distributed ledger technology and differs in two regards. The first is that the basis of these digital cards is Blockchain. Although given the heightened interest football fanatics share for these collectibles in this day and age, the drawback these card carry is the feature of scarcity.

The emergence of Blockchain and distributed ledger technology has laid the foundations of a platform through which digital collectibles can be created, with scarcity as an added essential feature. The second factor that separates Sorare from the rest is that the game has the official backing and licensing of elite football clubs and leagues. Sorare’s digital cards which represent football players are non-fungible tokens (NFTs). The sales made are split with percentage and distributed amongst the right holders (leagues, clubs or player associations). With AS Roma entering the frame, Sorare now has 36 clubs on his list.

It’s noteworthy to mention Sorare as a blockchain agnostic platform has got the backing of established names such as Consensys and gaming giants Ubisoft.

Why Football Clubs Like Roma Are Turning to Blockchain Platforms

AS Roma is a welcome addition to an already elite list of clubs with European pedigree like Schalke, West Ham United, and arch-rivals Napoli.

Footballing associations and club benefit a great deal by turning to blockchain-based platforms. Firstly, they gather a reputation of keeping up with modern times and innovations and are trying new things to enhance the experience of fans substantially. It also adds significantly to their resources as revenue is generated from a new stream.

For Sorare, these sort of partnerships enhance their visibility and adds more credibility. Nicolas Julia boasted – “We are very proud to have signed this agreement with such an Italian heavyweight, and we thank them for their trust in Sorare. We see this as a new, key step in our vision to work with the best football clubs from around the world.”