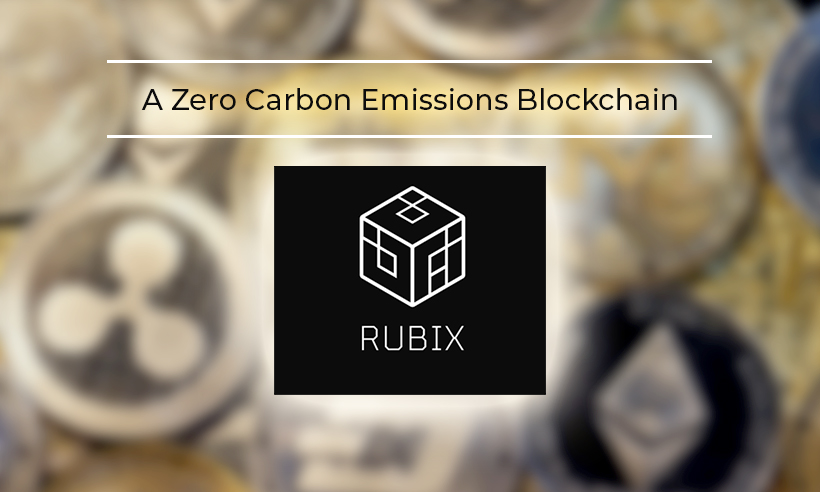 Finally, an energy-efficient version of the blockchain is launched which is programmable and allows building decentralized applications. RubiX Blockchain, launched on March 15, 2021, is a Proof of Harvest blockchain which reduces carbon emissions by 100%.

Currently used by 40+ clients, it offers super expedite NFT launches with minimum smart contract code. For the security of NFT, it uses proprietary QR code technology that eliminates the risk of duplication of NFTs across platforms. Moreover, it is claimed to be several times stronger than its competitors, Bitcoin and Ethereum.

The platform leverages real-world Distributed File System (DFS) based on content-based addressing for data storage. Also, it is lightweight enough to run on laptops, desktops, mobile devices, and IoT devices. Its mobile full node version will be available later in 2021.

It is a highly scalable blockchain solution and offers built-in privacy features. Currently, it supports all mainstream desktop OSs consisting of Windows, GNU/Linux distros, and macOS.

There are primarily two types of tokens supported, utility tokens, called RBX, and asset tokens. Asset tokens are non-fungible tokens like ERC-721 tokens of Ethereum which are unique and non-transferable.

Each node creates a unique digital identity (DID). DID is a unique 256X256 PNG image that is self-created but verified decentrally by peers in the network. Running a node is not resource-intensive and can be operated on a desktop or laptop.

The global state-machine in this blockchain is divided into a finite number of state-machines called ProofChains. While each ProofChain maintains one state, together all ProofChains represent a globally accessible singleton state that is immutable. RubiX global chain is made of 50.7M Proofchains. Each Proofchain is bound by one unique utility token. A proofchain is made of all transactions that use the same token to confirm.

All the utility tokens are stored and committed on the IPFS by the RubiX genesis node Ø. Each proofchain compares to a traditional blockchain with each block carrying only one transaction.

The parallel account chains provide a highly scalable blockchain. They also avoid forks and prevent double-spending of any asset.

Peers in the network are connected through the LibP2P protocol. Transactions on RubiX token chain are peer-to-peer & free. A RubiX transaction though requires one of the native tokens for preserving the provenance.

Transactions in RubiX are validated using an MPC using non-linear secret sharing. It provides provable finality rather than probabilistic finality of transactions. Most blockchains like Bitcoin, provide probabilistic finality for a block. A block once included in a blockchain in the past is only as safe as the number of blocks that have been built on top of it, expending more computational work behind this particular chain. However, there is no guarantee that this chain containing the block will always remain the canonical chain.

With RubiX’s parallel chain architecture, millions of such transactions can be performed simultaneously.

The parallel proofchain architecture provides individual consensus for each transaction. Different chains are linked through unique tokens and proofchain hashes. Each transaction achieves finality on its own without waiting to be pooled with unrelated transactions.

To validate transactions, here expensive miners or stakeholders are not required. Here tokens are harvested by validators. Less than 0.1% of tokens are pre-created to facilitate faster bootstrapping, the rest are harvested by the nodes in the network.

PoW consensus algorithm in most blockchains is an energy-intensive process. The other consensus mechanism, PoS suffer from concentration i.e. nodes with higher stakes may continue to gain larger voting power. Both protocols require each node to store the entire global state, which results in significant storage inefficiencies. In Rubix, a node only needs to maintain the proof chains for all its transactions. A full node does not maintain data and proofs of unrelated transactions. At any point in time, all the proof chains together constitute and preserve the global state of the network.

The Proof of Harvest (PoH) consensus protocol is a version of PBFT. It is lightweight and has less carbon footprint. The protocol is a combination of lightweight proof of work, proof of pledge, and proof of ownership. Proof of pledge requires staking of outstanding proof rewards (not the RBX tokens), by the validator nodes. When a validator node validates a transaction, it earns one proof reward. The accumulated proof rewards on reaching a threshold level can be converted into one new RBX token, thus, harvesting a new token.

The recently launched platform facilitates dApps that scale better on a decentralized network. They can be built on the top of the network to create a digital version of any real-world asset using Java language.

Furthermore, it supports a quick development of NFTs that can be applied to digital art, sports merchandise, and memorabilia, luxury goods, real estate, and financial institutions like asset management, insurance, payments, and fintech. Early developers can earn pre-created tokens based on transaction traffic on their applications.

The blockchain which is claimed to be cryptographically 1,000,000 times stronger than the elliptic curve cryptography used in Bitcoin and Ethereum is hoped to draw many eyes from the blockchain community. Conclusively, its claim of an energy-efficient alternative is the best we can hope for a carbon-neutral blockchain economy.