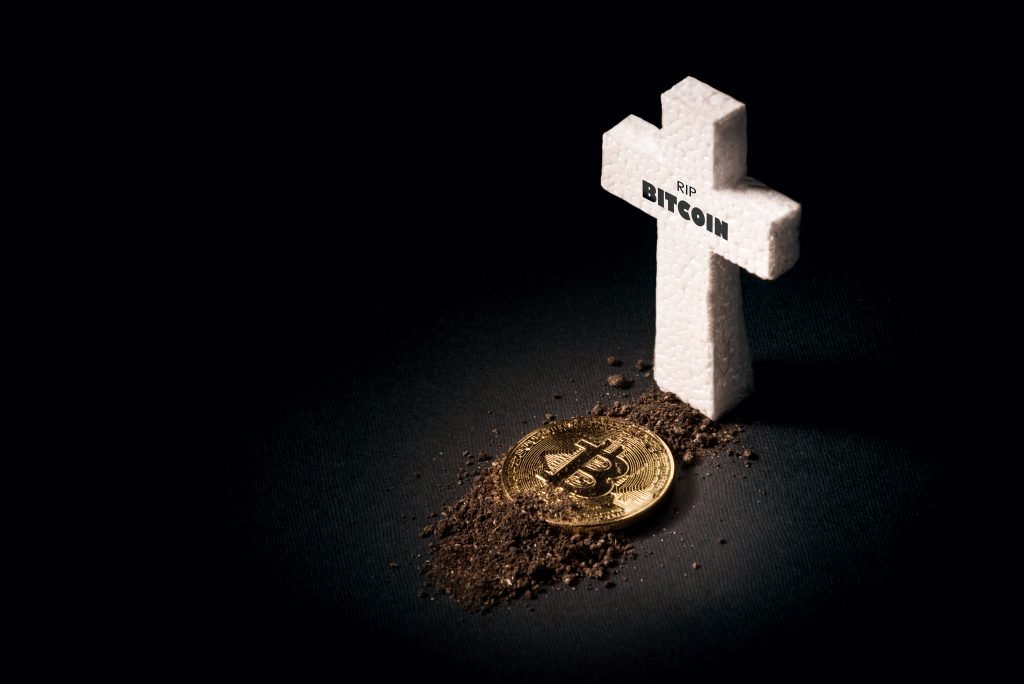 The Largest Cryptocurrency Has Died for More than 300 Times?

Bitcoin, the largest cryptocurrency and the 7th largest currency in the world, has died more than 300 times. You read it right! Bitcoin dominates 66% of the entire crypto market at the time of writing. And the year 2020 has clearly been a year for Bitcoin, with its price crossing new milestones almost every day. Investments are raining over Bitcoin. The beginning of 2021 was also in favor of the first-ever cryptocurrency before the price of BTC started to show bearish behavior around the second week of January 2021. Despite this Bitcoin is carrying a lot of hopes of the traders. The price of Bitcoin is even expected to reach $100,000 by the end of 2021. And with investments from almost industry aimed towards that direction, this target looks like a cakewalk for Bitcoin.

The Most Recent Deaths of Bitcoin

And amongst all these, believe it not, Bitcoin has been declared dead twice in 2021 at the time of writing. The first time it happened was on 2nd January when American stockbroker and financial commentator Peter Schiff tweeted, “If you never sell your Bitcoin, what difference does the price make? When it ultimately goes to zero, the percentage loss for all HODLers will be the same, 100%. The significant difference will be how much you pay, not the price. Those who ‘invest’ the most will lose the most.”

Moreover, Ray Dillinger, who reviewed Satoshi Nakamoto’s Bitcoin code with Hal Finney before it was released, called Bitcoin “is a disaster,” on 28th December 2020, when the crypto was again declared dead. He wrote, “Okay, this may be just my depressive side talking, or it may be the stress of the last year just boiling over. But I’m inclined to think it’s not and it isn’t. It is my opinion that Bitcoin is a failure. Worse than that, it’s a disaster.” 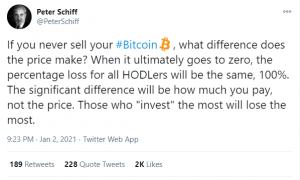 What Does the Term ‘Bitcoin Dead’ Actually Mean?

Before we get into it further, let us understand what they meant when they said that Bitcoin has been declared dead. Bitcoin death means the times when it has been called a scam, disaster, or a fake currency by eminent personalities. These personalities are known for having good knowledge about the financial as well as the crypto world. It is about the times when analysts said this cryptocurrency has no future and will soon turn into abundant crypto.

Starting right from 2010 to 2021, bitcoin saw around 394 deaths. The maximum number of deaths was recorded in 2017, with approximately 214 deaths. A Singapore-based website called 99 Bitcoins, maintains a timeline of the number of deaths Bitcoin faces every year. According to the website, the oldest death was on 15th December 2010.

2020 Saw the Least BTC Obituaries in the last 8 Years

As per the 99 Bitcoin article, in 2020, Bitcoin has been reported dead or dying only 11 times. This record-breaking decrease in the number of obituaries is because Bitcoin kept breaking many price milestones and owned the crypto space in 2020. Kevin Kelly, global macro strategy lead at Delphi Digital and former equity analyst at Bloomberg, said in a direct message with CoinDesk, “In the past, it was in vogue to publicly dismiss or even shame those who believed in bitcoin’s value proposition.”

He added that now the times have changed and the tables have turned. The growing investments and the price increase have made many people believe in the first-ever cryptocurrency. Major financial institutions like JPMorgan, which called Bitcoin “a fraud” have not only turned towards Bitcoin but also provided banking facilities to mainstream crypto exchanges like Gemini and Coinbase.

Are the Reports of Bitcoin Obituaries Going to Decrease Soon?

Bitcoin has gained a lot of trust over the past few years. Imminent public figures are now seen changing their opinion regarding Bitcoin and other cryptocurrencies. Therefore, it is safe to say that this is the beginning of Bitcoin 2.0. In December, a report made by Kelly’s team stated, “Institutional investors have not only turned net-long since September but also the magnitude of their net exposure, measured in BTC, has increased relative to prior periods as well.” Therefore, with a stance on Bitcoin changing so rapidly, we can expect the currency to go a long way without ‘dying.’