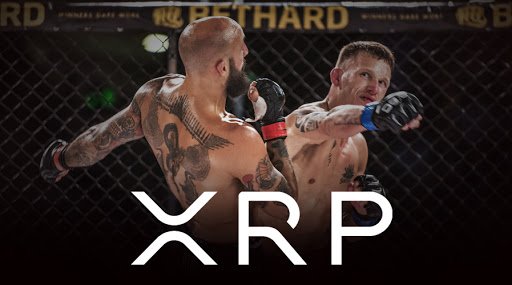 UFC champion Ben Askren has recently annoyed the XRP Army, calling the third-largest cryptocurrency a scam on Twitter. Askren’s tweet immediately went viral as it got 1,500 likes at the moment of writing and prompted another war between several crypto camps.

Ripple has always been a big name in the crypto industry. Recently, Alipay’s Partner Tranglo announced to integrate Ripple’s Transboundary Payments. While Bitcoiners were busy. XRP supporters didn’t hesitate to take personal jabs at Ben Askren. Some of these followers compared XRP’s speed to Askren getting beaten out by Jorge Masvidal, his bitter rival. However, other XRP holders who were sensible saw Askren’s notice as an opportunity for further mainstream exposure.

Ripple has been rightfully considered as one of the most contentious projects in the crypto space. Jason Bloomberg, a contributor to Forbes, slammed Ripple as a token that is permissionless and centralized his op-ed article while questioning Ripple’s business model.

XRP has always remained a principal target of Bitcoin maximalists who thought that the token represented everything that went wrong with crypto. Peter Todd, Bitcoin Core developer, compared Ripple with biotech fraud Theranos, which ended up as Silicon Valley’s biggest disaster. Meanwhile, Adam Back, CEO of Blockstream suggested Brad Garlinghouse was purchasing BTC with Ripple’s XRP tokens that his firm dumped on retail.

Why Not Gold And Bitcoin

Askren himself has been a strong Bitcoin proponent, which most probably explained his disdain for XRP.

That said, being a proponent of Bitcoin does not necessarily indicate that people hate XRP token and Ripple. As described by some reports, Garlinghouse admitted that he was bullish on the top cryptocurrency as a store of value; however, he didn’t view it succeeding as an exchange medium.