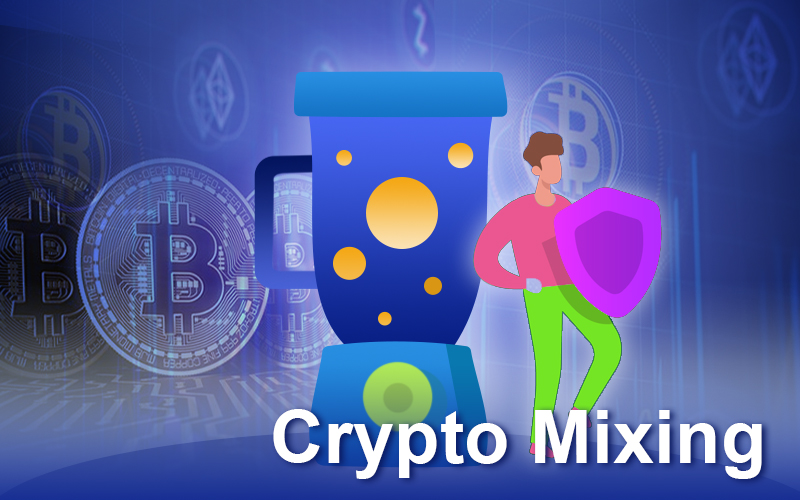 What Are Crypto Mixing Tools And How It Helps In Crypto Transactions?

Cryptocurrencies were introduced in the market as an alternative to the centralized financial system promising instant transactions at lower costs with a privacy-centric aspect, however, the privacy aspect went for a toss after government regulations came into the picture. The government agencies around the world are releasing new regulations because they feel that private transactions can lead to frauds and money laundering.

However, people who dived into the crypto-game for privacy on their transactions believe regulations should not come at a cost of their right to privacy. This is the reason why coin mixing tools have gained a lot of popularity and adoption in recent times.

Coin mixing tools combine a number of crypto transactions with one another which makes it difficult to trace the actual origin of the crypto transactions. This feature has made these tools quite popular among privacy-centric traders as well as scammers and hackers who use it to launder money they have siphoned off exchanges. Let us look at some of the most popular mixing tools and services.

Coinjoin- Also popular as Coin Mixing, is a strategy to secure the Bitcoin holders privacy while they process the transaction. This anonymization strategy requires a different part to sign an agreement regarding the mixing of coins. It mixes the digital assets while they all are engaged in a transaction separately. This way the outsiders are not able to determine any of the transaction by the different parties.

Whirlpool- This strategy has been released a few months ago, for basically android mobile users. This service has been developed on Android wallet of Samourai and with the help of it, the user can mix the coins on the go. As the user mixes the coins its on-chain privacy starts increasing. While doing so the user does not have to abandon his custody of Bitcoin. Earlier, this software was available for desktop users only.

Cashshuffle- Another mixing service that allows non-custodial mixing is Cashshuffle. This decentralized service is operated by mixing UTXOs in the Bitcoin Cash wallet. While continuing its process the technology your UTXO with its other users.

Wasabi Wallet- One of the best non-custodial wallets is integrated with Chaumian Coinjoin mixing service which is strengthening day-by-day. This wallet is best for those regular users who want to mix a modest amount of BTC.

Why Privacy-Focused Coins are Needed?

Over the past few years, a few privacy-centric cryptocurrencies have gained both in popularity and value. There was a time when most of the privacy-centric coins were considered to be the top ten digital asset contenders as far as market valuation is concerned. In recent time, some of the digital assets have dropped out of this capitalization, but some are there who are following highest values coins.

When Bitcoin was issued, its developer claimed that the coin is anonymous but actually it was a public currency. I say so because all of the Bitcoin transactions are recorded on a public ledger. Although you can not trace its addresses, you can know the details of the transactions.

Also, if the Bitcoin holders link their real identity to the bitcoin address then any other person who has access to Bitcoin can see all the transaction details of the bitcoin holder and that too without their permission.

If a person is using any digital currency for making transaction or anything then they would prefer privacy-focused coin for themselves and most popular among them is Monero.

The Ring Confidential Transaction improves the privacy and security of the cryptocurrency. It gathers the sending and the receiving private key with old transactions of the network to create a ‘mixer’ which can obfuscate the addresses.

At times, Monero also uses ring signatures and stealth addresses to hide the details of sender and receiver in the transaction.

PrivateSend is the upgraded version of CoinJoin which includes features like decentralization and chaining approach. The currency protocol has an inbuilt decentralized mixing service which helps it in remaining fungible.

After Verge’s introduction, a popular adult website started accepting it as a payment, this made a huge headline during that time.

Komodo has been associated with the atomic swap DEX protocols which support the P2P exchange AtomicDEX. The main purpose behind integrating with Atomic swaps was to reduce the security issues with the cryptocurrency exchanges but it simultaneously improved the privacy feature of the virtual currency.

While you make a transaction through ZCash, just remember that its privacy feature do not provide utter anonymity.

Although the cryptocurrencies use technologies to hide the transaction path and enhance their privacy-feature, still they depend on public ledger technology only. The technology can hide the path, details but a person can find out that a certain amount of crypto has been transferred from one account to another.

In this case use mixer along with other privacy improving techniques like not exchanges which complies with KYC and by not recombining your freshly mixed UTXO. If you mix the cryptocurrencies with non-custodial services then its fungibility will increase. The mixing services allows the crypto-holder to keep their coins with themselves and maintain their privacy for a certain time. This mixing service also requires some modest fees for doing so.

The crypto users–conscious about their privacy sought out different privacy tools which not only secures their personal information but also the activity of their transaction. But news users should always do their homework, before using any of the mixing services.