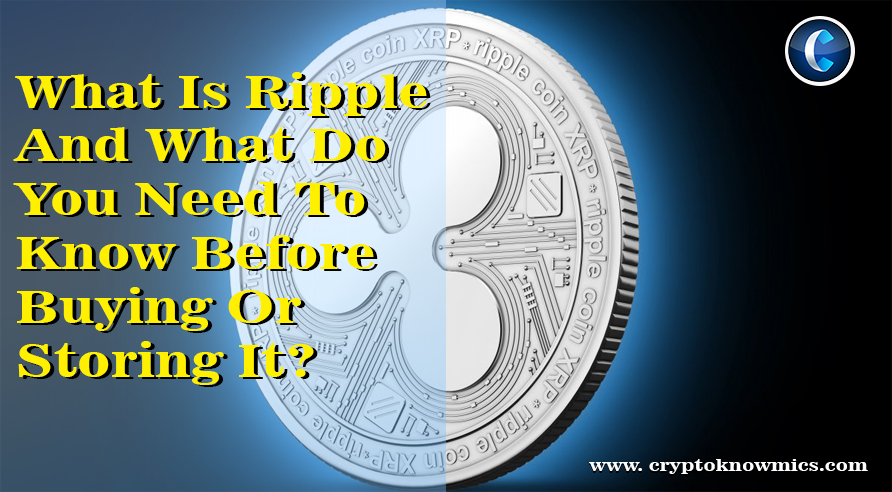 What Is Ripple And What Do You Need To Know Before Buying Or Storing It?

Currently, Ripple (XRP) is one of the largest digital currencies in the world. It is the 4th most popular crypto project by market capitalization, boasting a total market value of about $26 billion. Compared to other top cryptocurrencies, XRP seems to be relatively low in price, which is also one factor that makes the coin very appealing to investors. However, in recent months, Ripple has suffered multiple lawsuits, which have affected its price and how well the coin is doing presently in the crypto market.

Are you interested in Ripple (XRP) but unsure if it’s a good decision or where to start? No worries. We have put this article together to help you. The article will tell you everything you need to know about Ripple – how the coin has been fairing and how you can buy and store one of the most popular and user-friendly tokens in the crypto space.

Ripple is an open payment network that uses the XRP unit as a digital currency. Ripple was established in 2012 by Ripple Lab, a private company with the intention of offering people almost instant and direct monetary transactions. It was originally created to serve as a bridge between financial institutions and end-users. Being both a cryptocurrency and a platform, Ripple has been playing that role well.

Before Ripple was created, sending money through Western Union or SWIFT comes with huge fees and lots of pain. It sometimes takes 2-5 days before the money is cleared and the costs associated are usually high. But since Ripple was created, sending money internationally has become a breeze. Banks and financial institutions use it to transfer money from one country to another. It makes transactions cheaper, faster, and you can transfer from any country in the world. That is how Ripple has been changing the world, using XRP.

How Does XRP Work?

Unlike other cryptos, Ripple (XRP) does not have a blockchain and cannot be mined either. It instead uses its own distributed ledger technology called Ripple protocol consensus algorithm. That means every node must agree to every transaction to verify that it is correct.

READ  The Number of Cryptocurrencies Is Huge: Some Have an Advantage in Investing Over Others

Working as a bridge currency for banks, Ripple has brought so much simplicity to the finance world. For instance, if you want to send $3000 to your friend in Spain, you won’t have to wait for 2-5 days again or pay an exorbitant fee to get the money over to your friend.

With Ripple, you only need to take the $3000 to your bank. The bank will convert it to XRP and transfer it to the bank in Spain. It will be received in a matter of seconds. The bank then converts the XRP to Euro, and your friend can have the money almost immediately. That’s indeed incredible!

Looking at the design of XRP, it is obvious that it was originally designed to provide a much cheaper and quicker transaction than other cryptocurrencies, making it more suitable for day-to-day payments. However, XRP is not often used this way. It is now used more for international transactions.

XRP has a great advantage over other cryptos because of its ability to be exchanged to any valuable or currency, including gold, with a unified minimum commission.

What Can You Do With Ripple (XRP)?

The token is designed to function both as an institutional and consumer/retailer cryptocurrency. So with XRP, you can do the following:

Recent Multiple Lawsuits and Their Effect on Ripple (XRP)

Before you invest in Ripple, you should also know about the several recent lawsuits the token has suffered and how they have affected its price and popularity. The most recent of these lawsuits was the one that happened in December 2020 when the U.S. Securities and Exchange Commission (SEC) filed a lawsuit against Ripple.

SEC alleged that the sale of XRP was unregistered security offering worth over US$1.38 billion. The SEC also named Ripple’s executive chairman Chris Larsen and CEO Brad Garlinghouse as co-defendants aiding and abetting Ripple’s violations and making US$600 million in personal profits from their unregistered sales of XRP.

The case was closely watched by the XRP community and the cryptocurrency industry worldwide. This lawsuit against Ripple led to a drastic drop in the price of XRP by more than 60%. Many cryptocurrency exchanges had to suspend trading of the coin in the U.S.

However, in the first week of April, the court ruling came out in favor of Ripple – it got 2 of such in its favor in that same week. This result helped Ripple get back to its feet after the recent fall in price. But much more, the price surged more than 40% that same week, rising from $1 to a high of $1.47, its highest level in three years.

Since then, XRP has continually increased in price, and it’s presently priced at $1.54, bringing the token to the 4th largest cryptocurrency in the world by market value.

Where to Buy Your XRP?

If you are ready to jump on the train and buy some XRP, it is indeed a smart decision, judging from the recent high in the price of the token. If you are based in the U.S., buying directly with an American credit card may not be possible. You will first need to buy Bitcoin or Ethereum and then use them to buy the Ripple token.

However, a platform like Anycoin Direct can make the process easier for you. They allow you to create an account and buy your Ripple token without any problem or stress. If you are based in the U.S., they have a safe and easy procedure to help you purchase your XRP coin.

Ripple Wallets: Where to Safely Store Your Ripple (XRP)

After purchasing your Ripple, the next concern is where to store the currency. That is when you need a Ripple wallet. It is the place where you safely store your Ripple XRP from being stolen. But unlike Bitcoin wallets which are totally free, Ripple wallets require that you have 20 XRP for booking their wallet address. That’s why you need to pick the proper wallet right the first time to avoid spending 20 XRP on multiple addresses.

READ  The 5 Most Preferred Bitcoin Open-Source Wallets in 2020

There is a variety of Ripple wallets presently available on the market for you. These include:

These are presently the most common way of storing cryptocurrencies, even though they come with the most risk. They are online wallets, and you can access them from pretty much any device wherever you are. But because they store your private keys online, they are very vulnerable to a cyber-attack.

A software wallet can either be a mobile or desktop/web wallet. Mobile wallets can be used on your smartphones and also come in a variety of apps. But be careful when choosing mobile wallets – choose one that stores your private keys exclusively on the device the app is installed and not on some server online. Some recommended mobile wallets you can use to store your XRP are:

All of these wallets are free and compatible with Android and iOS devices.

On the other hand, desktop wallets are apps you can download on your computer. Some companies offer both mobile and desktop versions of their wallets, and you can most times synch the two.

Web wallets are usually websites or browser extensions. Most exchanges offer this type of XRP wallet but using a web wallet means your private keys will be stored on the company’s server. That way, you totally not in control of your wallet, and of course, your XRP.

Some recommended desktop and web wallets are however are:

Hardware wallets are compact tamper-proof USB or external storage devices that make it easy for you to store your Ripple toke offline. These types of wallets are more secured than any mobile or desktop wallet. They are capable of generating private keys and digital signatures offline, making them almost impossible to hack and have your XRP stolen. Two popular hardware wallets you can use to store your XRP are and Toast Wallet.