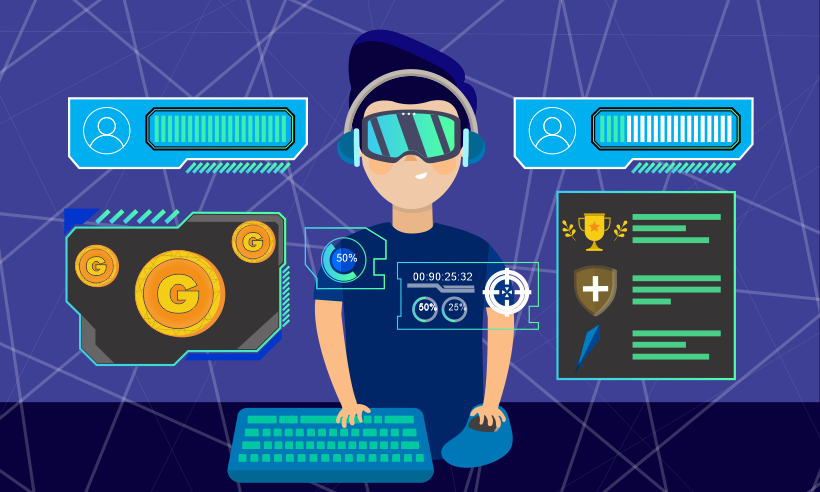 Why DeFi will Shape Virtual Currency in Online Gaming

The expectations from the traditional currency were so mundane that the realization did not hit us until we saw the potential in the technological advancement that started with Bitcoin and its driving force blockchain, taking the entire world on an unstoppable route to a decentralized future. With this revolutionary technology, no sector seemed to have gone untouched by the exemplary concept leading to great social impact by data management and storage in blockchain along with mind-boggling financial advancement and opportunities supporting the virtual economy in a decentralized finance (DeFi) system.

Online or virtual gaming is one of the leading sectors that holds major potential in DeFi as it already contains a monetary existence in its world- virtual currency. The currency used in online multiplayer games has no central authority, hence it lacks any regulatory body creating potential risks. Multiplayer online games and the interaction of the in-game currency with the real world is off-putting to which DeFi is already on its way to improve the gaming ecosystem.

Virtual gaming is nothing new to the world, with many online gaming options present since our advent into the digital age. Massively multiplayer online games, commonly known as MMOG, are online games that involve a large number of players on the same server. With most games differing from each other, they are commonly supported by computers, smartphones, and game consoles, and other portable devices. The hype for mass participation in virtual gaming can be well understood by the key component that allows players to come together in the virtual world to play with each other or compete on a vast scale and even opens the option to interact with people around the globe. The popularity that MMOGs gained led to the growth of online gaming services Xbox and PlayStation.

The debut of Massively Multiplayer Online Role-Playing Games (MMORPG), like The Realm Online, Ultima Online had served a limited number of 50 players at a time. And by the time we entered the 21st century, a great number of MMORPG’s were serving thousands of players at the same time paving the way for popular games like EVE Online and World of Warcraft, heavily dominating the MMOG market. World of Warcraft was one of the most popular online games among western consumers from 2005 to 2009.

Most MMOGs featured in-game virtual currencies that facilitate players to earn and hold virtual goods or money. It depends from game to game what that currency can be used for. The interaction between the players or even a third-party and the game provider with virtual currency creates a haze in the line that separates the real world and the virtual one.

Before the emergence of cryptocurrencies, the virtual economy was vastly referenced to online gaming, dealing with virtual goods. The active participants considerably enter the virtual realm with the idea of leisure and fun, interacting with virtual avatars in a whole world created consisting of virtual food, drinks, weapons (virtual property), and other goods to further engage in the game which is facilitated with the in-game currency.

The interaction of virtual properties includes trade activity of buying and selling digital assets staking real-world assets, generally money, creating an economic ecosystem with nature similar to the traditional economy. The virtual property or goods held and priced within the game represents virtual economies working on a supply and demand model, giving the virtual gaming an added dimension. With an in-game currency already established to deal with the in-game purchases and transactions are often used in making a real-world profit.

Games dealing with in-game currency systems allows a player to have partial or full control over virtual assets. This facilitates the player to further establish trade with other players and acquire virtual goods or develop a virtual marketplace, without the involvement of any developer. The virtual marketplace also interacts with real-world money on external websites when a player trade in-game virtual assets for traditional currency. Such player driver economies led the way to the popular practice of gold farming in World of Warcraft involving players getting paid in real money to acquire virtual assets.

Standard currency– Most games online and offline have an in-game currency that is only acquired in the game that allows players to earn in-game items that cannot be traded with other players or converted to real-life funds. The biggest example of this is the gold pieces earned while World of Warcraft that can be further used to buy in-game items or new gear.

Shortcomings of Virtual Currencies in MMOG

Virtual currency is not like the traditional currency that we know and depend on our very lives on. But yet it seems to hold its own existence and economy in the real world despite being a virtual entity. Money in any state has its functions and characteristics including regulation, a medium of exchange, storage, etc. that defines and makes up the economy.

Given that the traditional currency has a regulatory system that manages its supply under a central authority (before the idea of DeFi existed) that looks and ensures ethical flow and transaction from both ends. Unfortunately, virtual currency in MMOGs has no such authoritative figures that control the flow of virtual currency as the currency is player-driven so any essence of balance fails to exist. A player assigns the currency to itself by earning in the game, means of which are different from one game to another which straight-up loses the place of any central authority to control the money supply.

The absence of balance and control over monetary control can be determined by the situation that cultivates due to the rapid growth in skills and wealth of an avatar or character in a game compared to the real-world situation. So the virtual currency stands at the risk of diminishing its own value against the real currency.

Moreover, a currency that is player-driven and involves rapid transactions, due to no control is incapable of holding necessary data and transactional records to verify and provide security against illegal activities.

A financial system with complete transparency, backed by a strong consensus system and the limited involvement of any authoritative intermediaries shaped the vision for a DeFi system. Even with more than sufficient warnings and cautionary components involved with the risk of participating in the virtual economy, the idea seemed to have gotten lost to the future visionaries, seeing the fast development of digital /virtual or crypto economy as the skyline of fintech’s future. The fact is supported by the raging number of opportunities that have emerged and are still coming forth with the support of blockchain technology, promoting creativity and unseen projections of opportunities that lay ahead.

MMORPGs are no exceptions to the cause given that the new smart contracts being deployed and many already in existence provides far better and safe interaction with virtual currency. Ethereum-based crypto games like CryptoKitties, MyCryptoHeroes, Gods Unchained have already transformed the MMORPGs industry and the regulation of in-game virtual currency.