DFI.Money (YFII) Technical Analysis: The Growth Wave Is Not Over 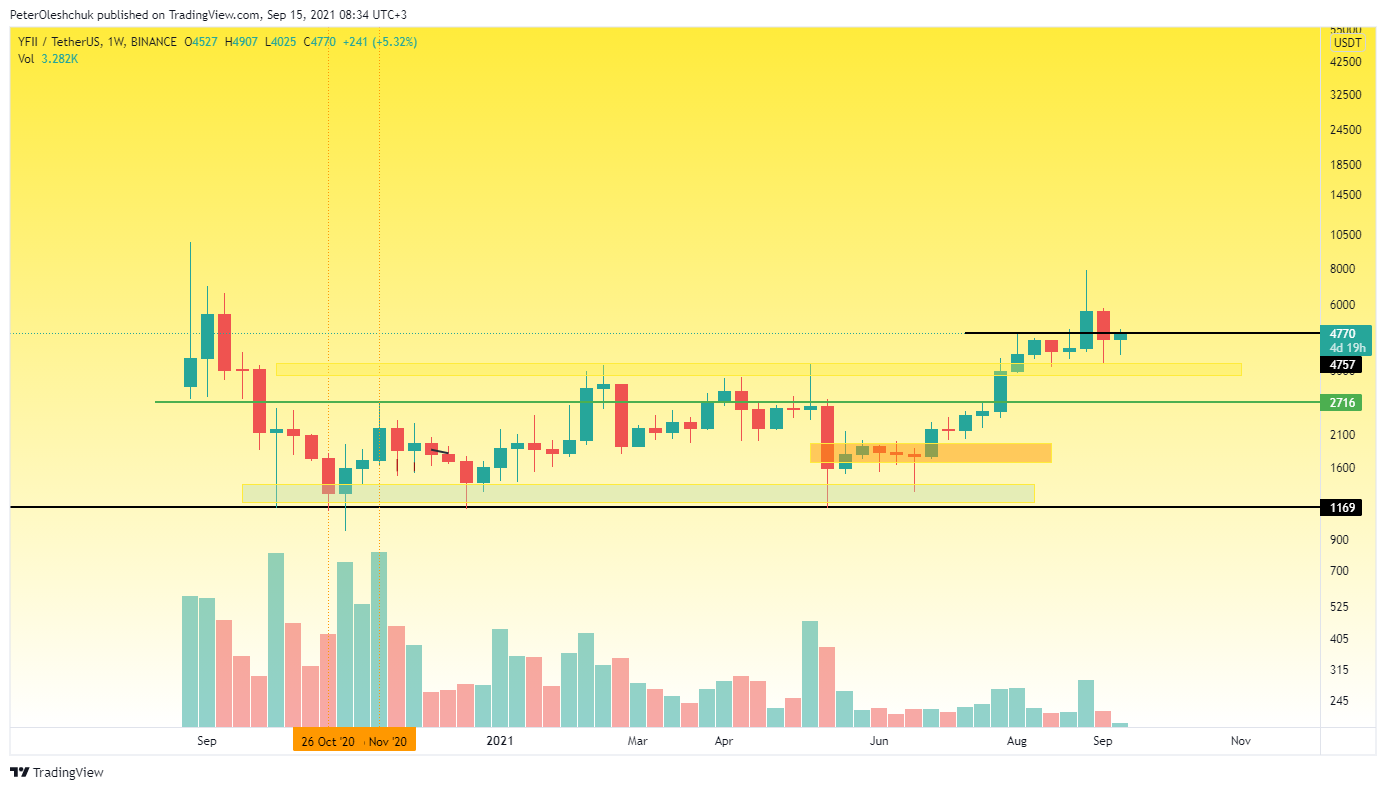 Sometimes a glance is enough to prove your strength. Sometimes you need a one-time demonstration of your biceps. And sometimes it takes two months to keep the price above the critical range and repel all attacks from sellers. Today we will talk about the third option, which concerns the DFI.Money cryptocurrency. The growth wave in the YFII market started a little faster than in other cryptocurrencies.

At the end of July, when the whole crypto market was just starting to grow, the DFI.Money price was already breaking the main liquidity range. After the breakdown of this range, buyers organized a consolidation with an upper limit of $4757. And it turned out that it was not so difficult to break the global range of $3350-$3650 as to keep it.

For 7 weeks, buyers are forced to repel all attacks by sellers in this range. Attempts by buyers on 30 August to break the newly formed consolidation and take control of the mark $4757 ended in failure. Buyers were able to organize a breakdown of this mark and build a local growth wave with a target of $7884. Exceeding our expectations, namely the test of $5540, which we wrote about in the previous analysis, buyers could not go against the BTC market. On 7 September, the YFII price returned to consolidation below the mark of $4757.

Technical Analysis of DFI.Money on the Daily Timeframe 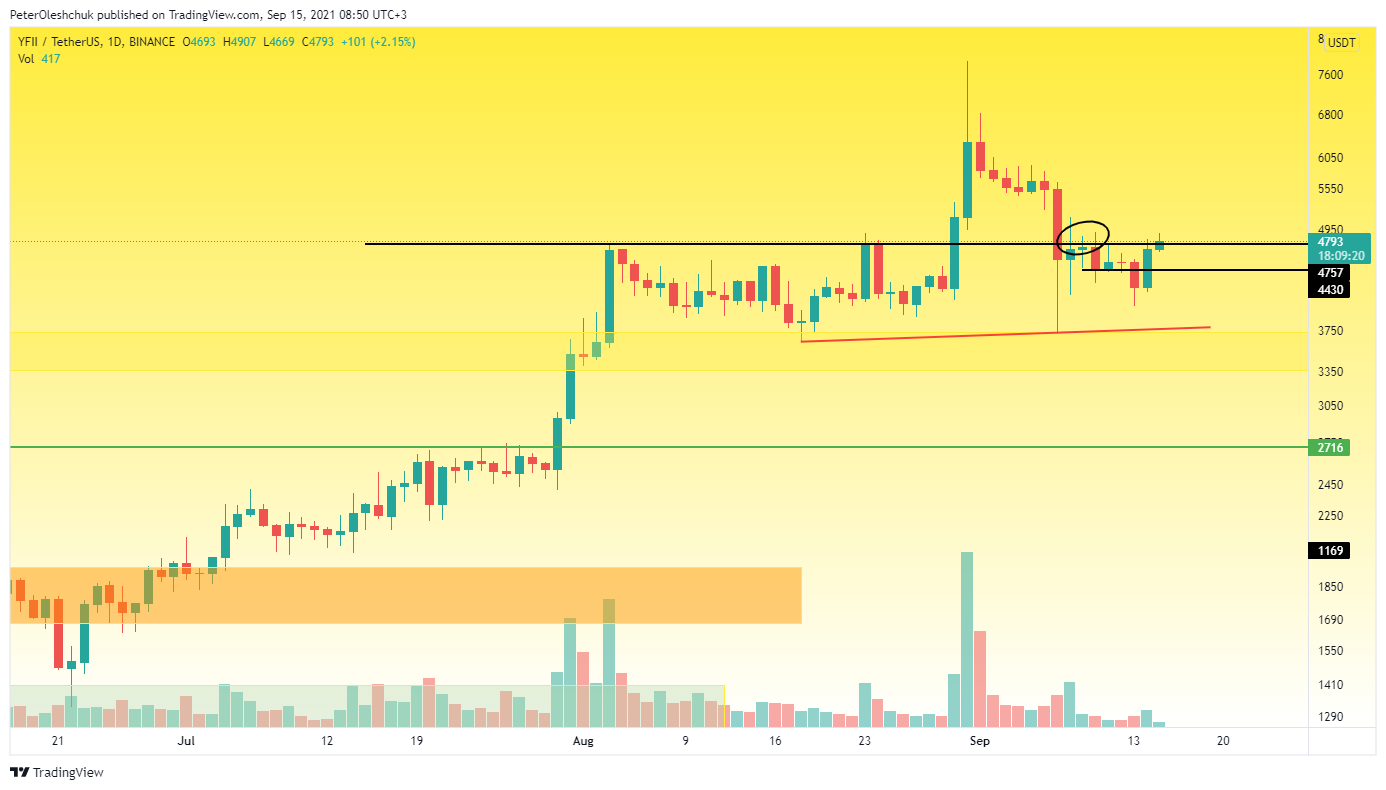 In the daily timeframe, we see that since 8 September, sellers have ceased to be aggressive. Yes, they managed to keep the mark $4757 under their control. However, after that, a weak fall wave began without the initiative to update the local low. On 14 September, buyers swallowed the offer of buyers, closing the daily candle at $4692. To win back $4757, buyers will reopen the way for a wave of growth with the first target of $6340. At this point, buyers will have to prove their courage and intentions to continue to grow and update the high.

The YFIIBTC Chart Shows the Hidden Prospects of the DFI.Money 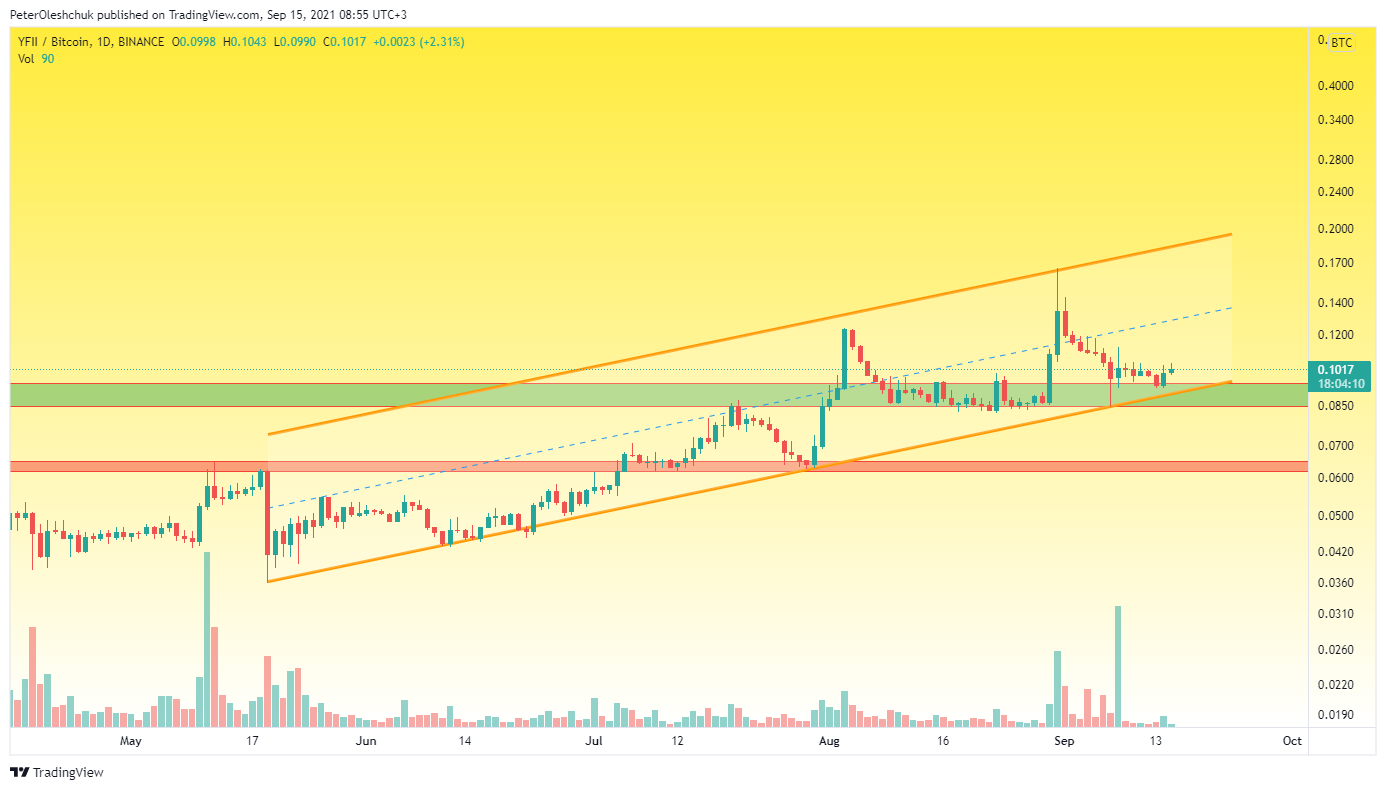 Analyzing the YFIIBTC price chart, we see that the price has been moving since May in a strong growth channel. After the test of the important range 0.085-0.095 on 7 May, buyers immediately showed their desire to buy the next day. On 8 May, we see a daily candle with high volumes that finally stopped the fall. The price continues to be in the orange growth channel and hints at a growth prospect of 88%. Given these facts, the DFI.Money cryptocurrency needs to at least stop the Bitcoin price for favorable price growth conditions.

Peter came to know about cryptocurrencies in 2017 and was instantly enamoured by their massive potential. As he gained more insights about the crypto market, he began writing about it. Peter's daily activity is analysis and forecasting, studying the price movements probabilities, and trying to understand the market inside. He is glad to witness such a phenomenon as cryptocurrency and decentralized finance, and to participate in it.