Ethereum (ETH) Technical Analysis: How High Is the Risk of a Price Fall to $1700? 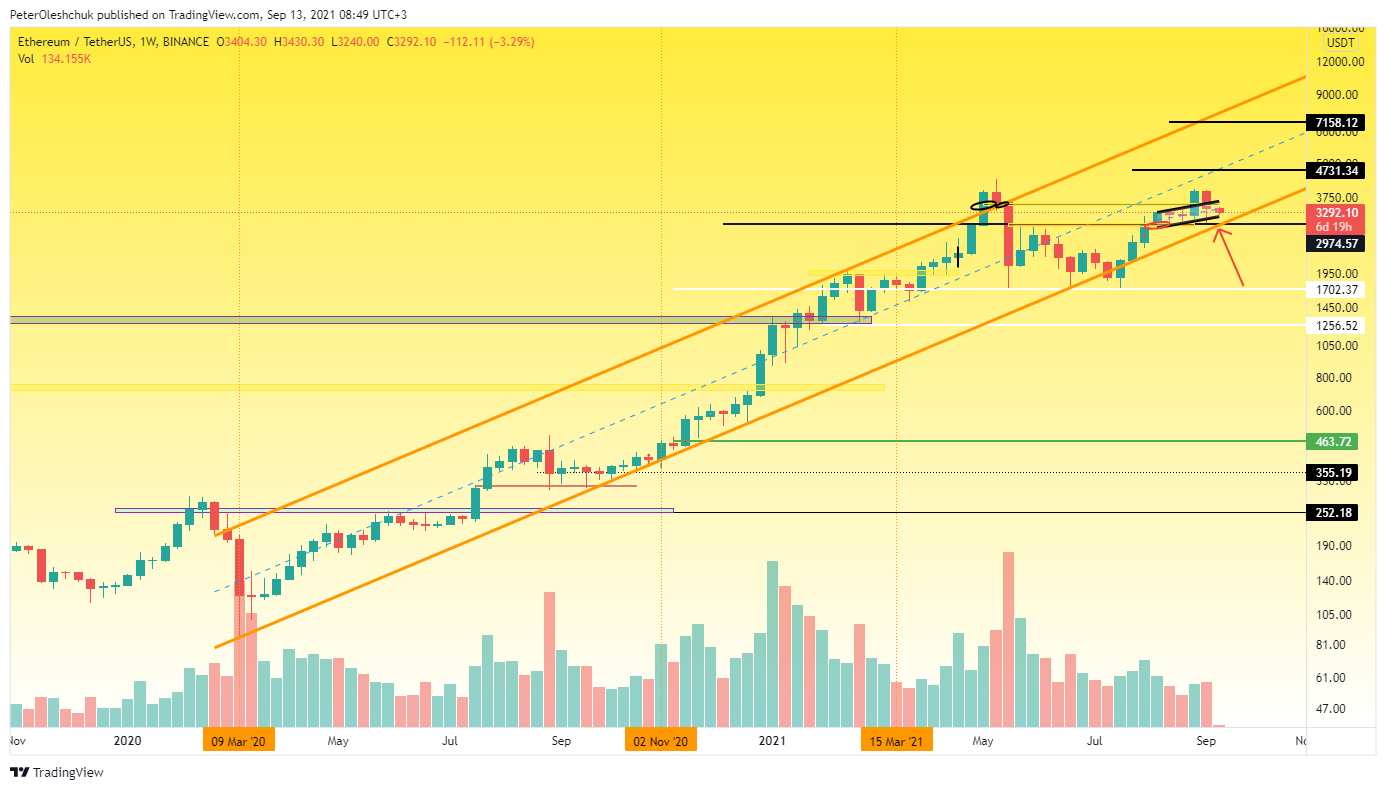 The trading week on the ETH market almost ended fatally. By re-testing the $3000 mark, sellers were close enough to break the orange growth channel. The ETH price has been moving in this channel since March 2020. The loss of control over the downward trend line of this channel will put the ETH market in a state of correction at least until the end of the year.

The Interest of ETH Buyers Has Significantly Decreased

Last week, buyers managed to keep the critical point and close the weekly candle without a signal of "absorption" of the previous candle. However, given the beginning of a new trading week - tests of buyers for strength in the range of $3000 are incomplete. Although bitcoin dominance remains low, BTC price movements still affect the altcoin market. And the high probability of a continued fall of the BTC price with the first target of $40,000 could tragically affect the ETH market.

In addition to the global trend line of buyers, it is worth paying attention to the mark of $3000. In the weekly timeframe, we see that buyers have been trying to stay above this mark for a month and a half. A lot of effort was spent on this and the stakes increased. In case of loss of control over this range, buyers will now retreat up to the mark of $1700. Though the trouble is that this can only be the first target. Notice how easy it is for sellers to do this in a week in May. And given the lower trading volumes during the growth wave from July, sellers will need less effort at the moment. 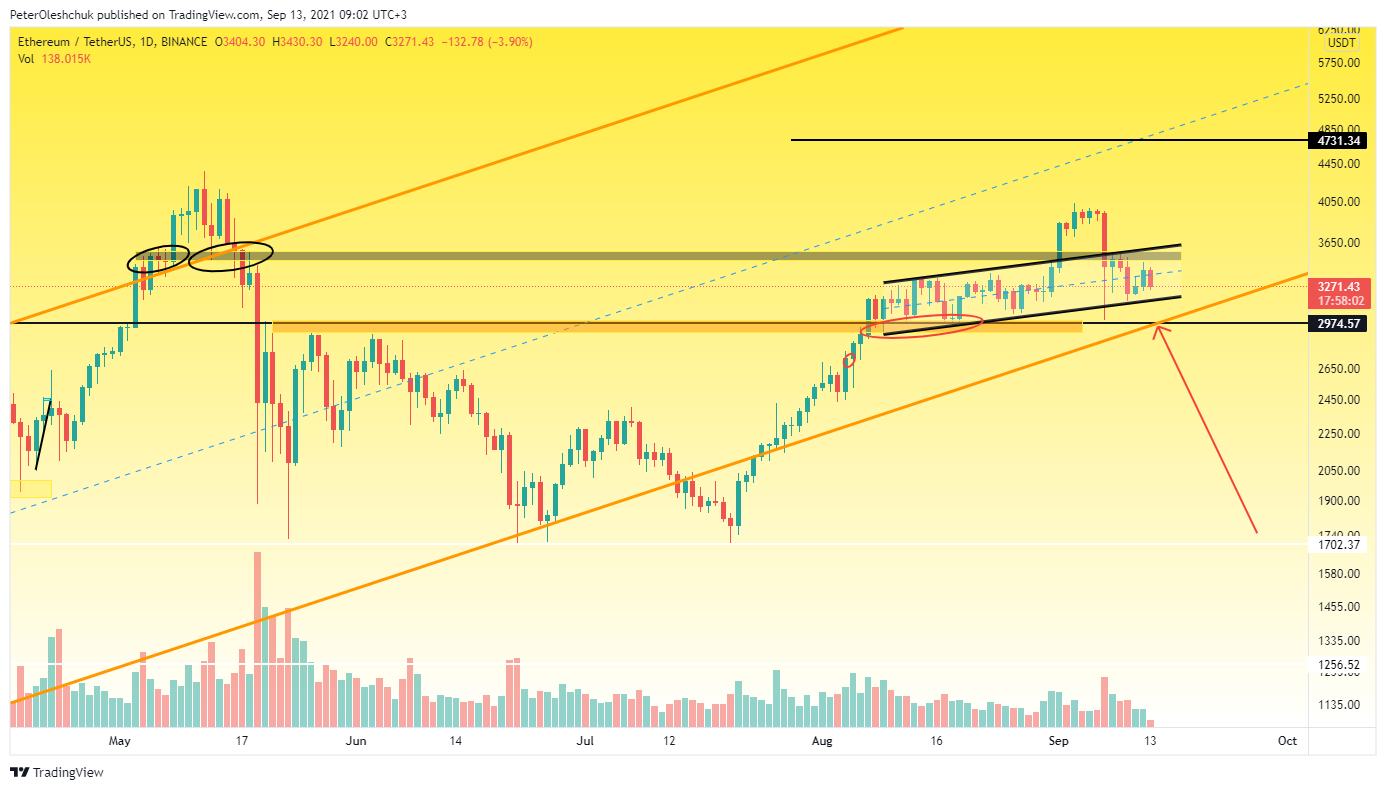 However, looking at the daily timeframe, you can see a positive scenario in the ETH market. Moreover, consolidation, which is clearly visible in the weekly timeframe, has the form of a growth channel. Buyers managed to break this consolidation on 1 September but failed to maintain their advantage.

At the moment, buyers need to keep the mark of $3140. In this case, the ETH price has every chance to continue moving to our main target of $4757. The first signal of the implementation of this scenario will be taking control of the $3500 mark. This mark concentrates the local headquarters of sellers, which was well secured from 8-10 September. But, now buyers have no idea about any tactical targets for growth. Today's candle without volumes absorbs Sunday one and increases the likelihood of an attempt to break the consolidation channel down. The daily timeframe of the ETHBTC trading pair also highlights a critical point in the market: 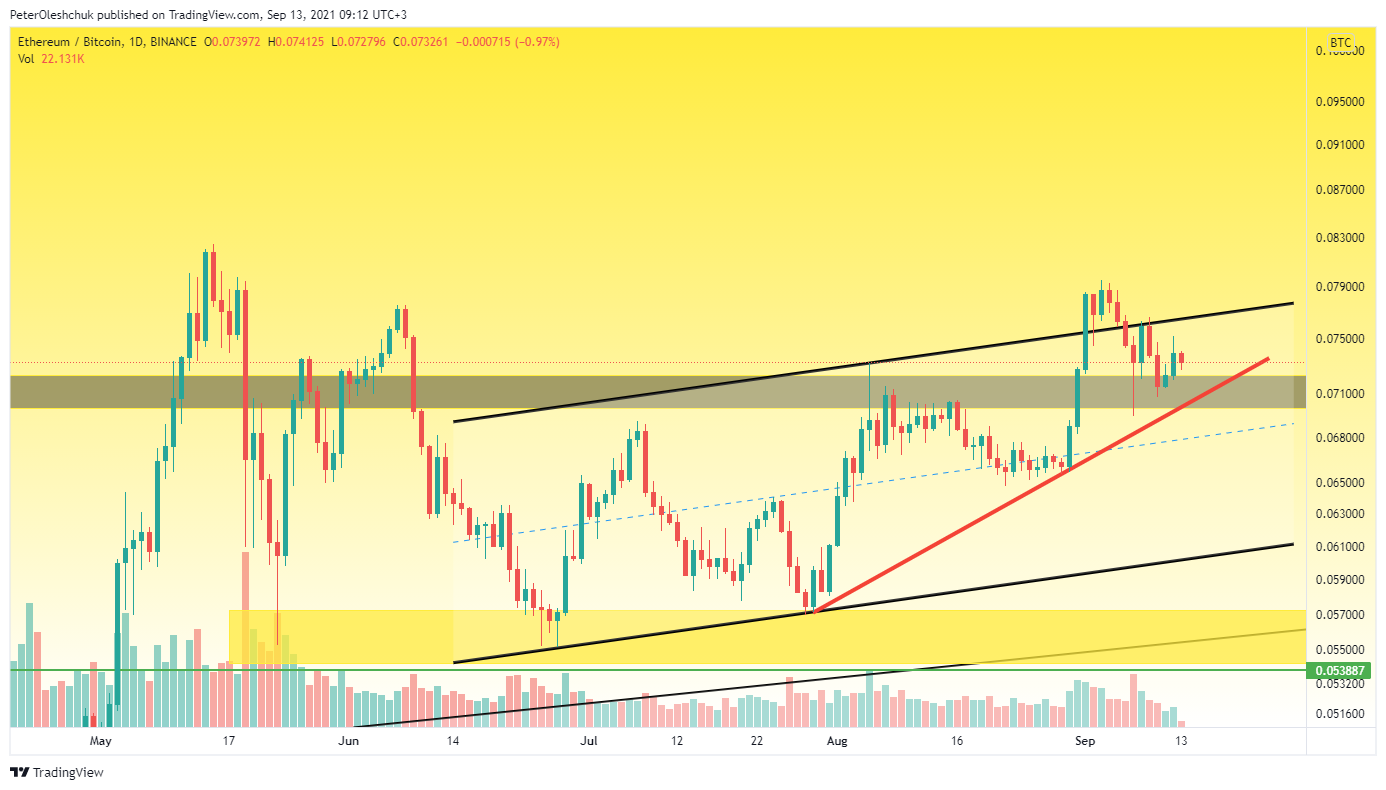 As you can see in the chart, the ETHBTC price is approaching an important liquidity range and trend line, which buyers have been keeping since July. The loss of these two components of the future growth trend will be another signal of a protracted correction in the ETH market with a target of $1700. Therefore, at present, it is quite risky to think about long-term investments.

Peter came to know about cryptocurrencies in 2017 and was instantly enamoured by their massive potential. As he gained more insights about the crypto market, he began writing about it. Peter's daily activity is analysis and forecasting, studying the price movements probabilities, and trying to understand the market inside. He is glad to witness such a phenomenon as cryptocurrency and decentralized finance, and to participate in it.