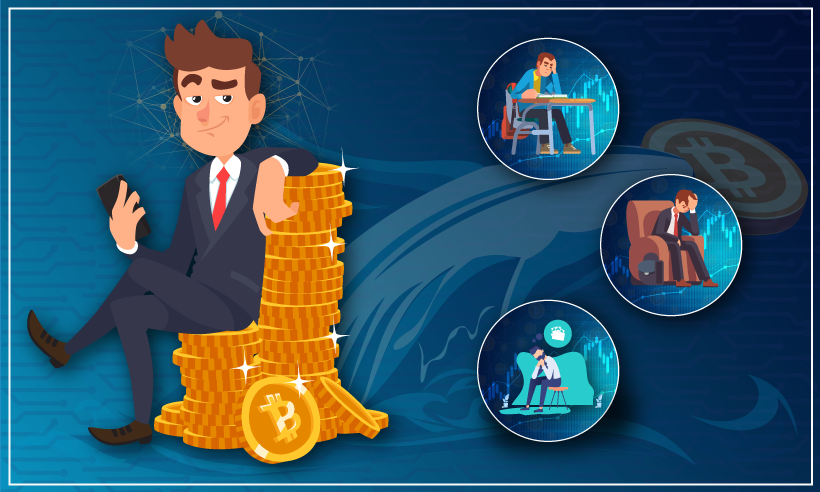 Are Crypto Whales Silently Gobbling All the BTCs and Manipulating the Crypto Market?

Welcome to 2021 says BTC bullish trend, and all the influential personalities asking the general public to invest in the latest technology at the same time brought a huge amount of money into the crypto-space. But, the sudden fall in the price of BTC in mid-January eventually imposed the big question of “WHAT’S NEXT!” in front of investors.

Undoubtedly, the coin has shown a massive surge of 197% in just three months. Considered as the safest asset of the crypto-sphere, Bitcoin, has always been the first preference of investors. Also, the adoption of digital assets and using peer-to-peer technology for transactions, i.e., without involving any financial institution in between, is what makes a serenade in the minds of investors.

Don’t Be a Whale Food!

The statement from crypto-analyst Lark Davis has meaningful insight into it. According to him, the rich and powerful players are manipulating the market. They first shake the market via massive selloffs and short the market immediately after that. And when the market goes down, they buy bitcoin from those who panic sold the BTC’s at 10% or 20% down. The process continues as rinse and repeat and thus making the small investors serve BTC as food to the big whales of the market.

Mark Cuban says “crypto is exactly like the internet stock bubble” has made the investors think about investing in Bitcoin again. And the best part is that the explanation is with bullish predictions of Bitcoin and Ethereum again. Similarly, Scott Minerd, Guggenheim investors’ global chief investment officer, has shared his thoughts in a tweet stating:

“Bitcoin’s parabolic rise is unsustainable in the near term, vulnerable to a setback. The target technical upsides of $35,000 have been exceeded, time to take some money off the table.”

In his tweet, he clearly pointed out that it would not be wise to invest “more” in BTC. 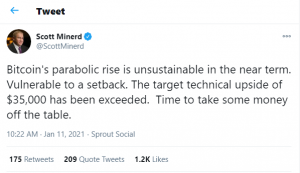 But from the eye of analysts, BTC whales kept on buying them as the price drops. Yes, both statements are supporting each other in a certain way! And it won’t be wrong to say that why he wanted us to take the money out? Because these bitcoin whales can scoop more BTCs?

In December, Minerd himself stated that Guggenheim is into investing more funds into BTC once the SEC approves his funds. So what’s the reason behind asking for taking our money out?

The Bottom Line: Is Price Sink a Strategy?

Clearly, the signs show that crypto-whales first manipulate the market by stating that decentralized ways of investing should be adopted, and investing in digital assets, especially Bitcoin, can gross larger profits. Basically, these influential people generate cash flow in the market, which eventually gets reflected in the price of BTC.

Now, again a tweet by Scott Minerd comes and the newbies of the market get into the dilemma to either HOLD or sell at the surge! This creates a situation of selling in a panic, which brings the price of BTC low. This is the time these millionaire whales scoop more numbers of BTCs to their accounts as per the Twitteratis.

The investors have to understand that even if you have invested at a time when the market is going high, it won’t be wise to simply withdraw when the situations are not favorable enough! Thinking on your terms and then acting accordingly has always been the best strategy to adopt for.