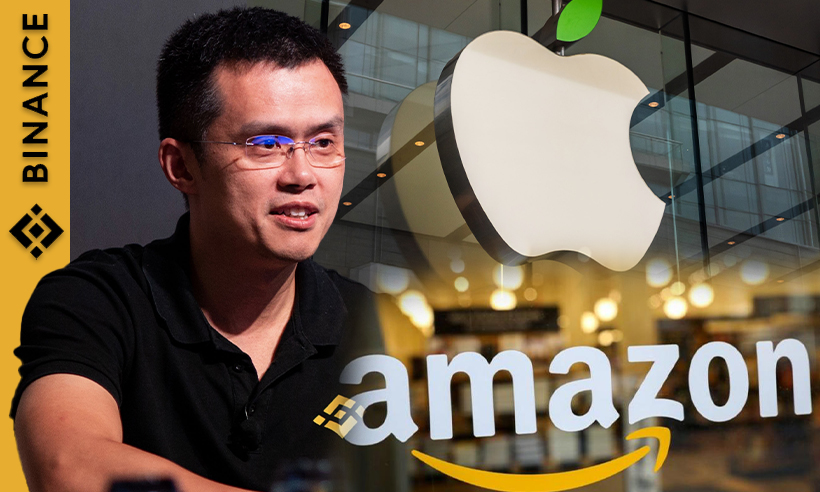 Binance Coin (BNB) has the potential to surpass top tech giants like Amazon and Apple. The asset has seen a phenomenal increase in value and speculation that it would continue in the same direction, resulting in a sky-high market cap that might exceed.

Davinci Jeremie, a popular Bitcoiner and Crypto YouTuber, triggered the CEO’s big revelation when he tweeted:

“Because it is a stock, a cryptocurrency, and a smart chain, I believe Binance Coin BNB will be bigger than Apple or Amazon.”

I believe Binance coin $BNB will be bigger than apple or Amazon because it’s a stock, a crypto, and smart chain.

CZ, though denying that BNB is a stock, agreed with the rest of Davinci’s tweets, saying, “Not a stock, but the rest is bang on.” “We don’t need stocks where we’re going.”

Not a stock, but the other part are spot on. 😜

Where we are going, we don’t need stocks. 🛸

CZ’s claim appears to be a long shot based on existing market data.

At the time of writing, BNB has a market valuation of $64.8 billion, which is an amazing valuation in the cryptocurrency industry but a big difference from Apple and Amazon, which have market caps of $2.09 trillion and $1.63 trillion, respectively.

BNB Has The Potential To Surpass Apple & Amazon

With Bitcoin being the only digital currency to have a market cap of $1 trillion, BNB bulls will have to work extra hard to make CZ’s goal a reality.

Nonetheless, there is reason to be optimistic. Historically, digital currencies have taken less time to reach market value than many traditional assets have taken eons to achieve.

While Amazon and Apple took 24 and 42 years, respectively, to reach a $1 trillion market value, Bitcoin only took 12 years.

Similarly, several top altcoins have surpassed many big traditional corporations in market value in a far shorter period of time.

Despite the enormous pace of acceptance that BNB is experiencing, as well as CZ’s market power, and the success of other Binance-related enterprises such as the Binance Smart Chain, the asset could exceed the $1 trillion barriers in a few years.

In another recent tweet, the Bitcoin billionaire expressed bullishly about the future performance of digital currencies versus traditional assets: