Dent is a blockchain-based wireless technology that provides users with a new-age digital and global mobile operator. It is a robust marketplace for trading Telco assets. With nominal roaming fees, it enables users to stay online even while traveling. DENT is the governance token of this ecosystem. Let’s see what DENT technical analysis proclaims about the performance of the coin for the next two days. 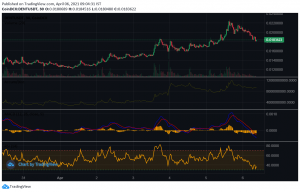 Currently, DENT is trading at $0.018. The price has decreased from the closing price of $0.019. Thus, the market seems bearish.

The A/D line is falling. Thus, selling pressures are slowly overtaking the market. Hence, we can expect the price to dip further as whale distributions are rising.

The MACD and signal lines are negative. A bearish crossover by the MACD line over the signal line has occurred too. Thus, the overall market momentum is bearish. Hence, we can expect the price to decline further.

Currently, the RSI is at 34%. It has just rallied from the 30% mark. It is a good time for swing traders to go long. Selling pressures are still high. Hence, we can expect the price to fall further.

As per technical analysis, the price has fallen below the first Fibonacci pivot support level of $0.018. As the bears seem strong, by day close, we can expect the price to fall below the subsequent support levels of $0.017 and $0.015, respectively.