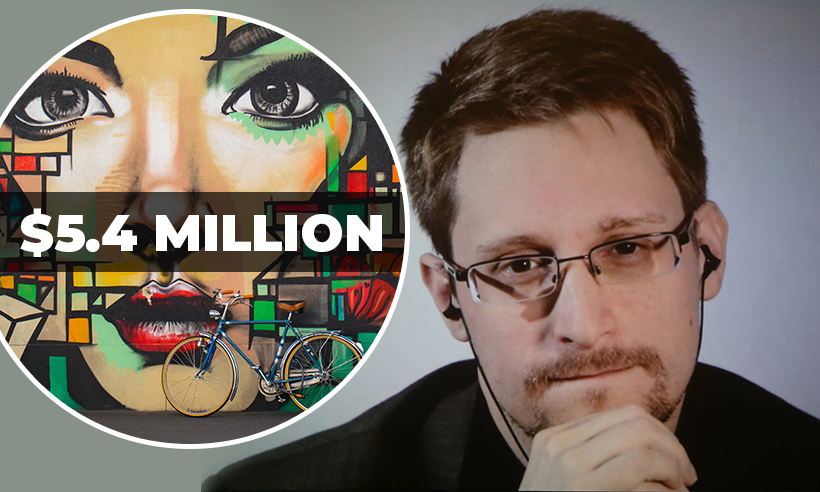 Edward Snowden created NFT art, “Stay Free” which has sold for $5.4 million in Ethereum. The NFT artwork represents his face as a cut-out with the background made up of the documented court decision ruling on the NSA’s mass surveillance program. A former employee of the United States National Security Agency, Snowden is guilty of the U.S. espionage charges for leaking the documents concerning the Prism surveillance program in 2013.

The sale makes “Stay Free” one of the single-most expensive NFTs to go at auction just behind Beeple’s $69 million digital art and $6 million for 16 CryptoPunks. Even though many artists and celebrities have given into the NFT craze, few have bagged in millions with just a single piece.

Snowden said that all proceeds from the sale will go to the Freedom of the Press Foundation, a non-profit that develops open-source tools for whistleblowers that develop open-source communication and encryption tools to shield journalists from state-sponsored hackers and government surveillance. Snowden has led the organization as president since 2017.

Wow. Thank you to @Snowden and to the generous bidders today. We're humbled and grateful to have been a part of this historic auction. https://t.co/w2kHzakoYx

The former CIA employee has been in self-imposed exile in Russia since exposing the NSA’s domestic surveillance program. He worked as a contractor for the CIA and the NSA in 2013 as an analyst.

The NFT piece is based on a photo by visual artist Platon that depicts a shaded motif of his face set against court documents linked to the exposé with Snowden’s signature on it.

READ  PayPal is Hiring Crypto and Blockchain Experts Amid Rumours

The NFT winner went by the username @PleasrDAO on OpenSea on the Foundation platform where the auction was held.

Snowden joins Megadeth, The Weeknd, and the WWE in releasing an NFT, making the non-fungible token market continue with its continual high-profile auction. The influx of celebrities and prominent names like Snowden has put the spotlight on the NFT market.