So What’s Moving ETH so Wildly?

The bullish resistance was tested at $1450 levels and the price broke this and moved ahead with great gusto. The 12-hour moving average is a BUY signal with the 7-hour SMA being a STRONG BUY. The RSI indicator for 14-days has crossed 70, which is giving a positive weightage to more highs.

The analysts feel the currency will now gain as the GameStop trading has been unwinded by the hedgers, and such incidents will increase the flow of money towards DeFi and cryptocurrency trades. DeFi platforms are completely based on ETH, thus the entire spectrum of mining and trading will gain from the user adoption.

Also, in another development, the fees earned by ETH miners were the highest since 2018. Miners have earned a record $830 million in January counting on network activity, fees, and Ether’s price all surged.

What Technical Indicators Say for Ether Ahead 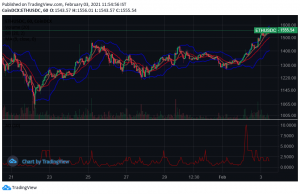 The major resistance levels of $1550 broke today, and it will need the levels to sustain the pivot level at $1,472 and move beyond the next resistance level of $1558. The broader support required to break this seems possible and the next resistance level is at $1663. Look out for any pullback to $1494 levels, post which, it can go into a trend reversal of $1400. The second support level for ETH is at $1276 levels. Keep watching the 100-day SMA to see if the trend remains intact. Closing the day above 50-day SMA will be a positive sign for tomorrow’s increase as well.