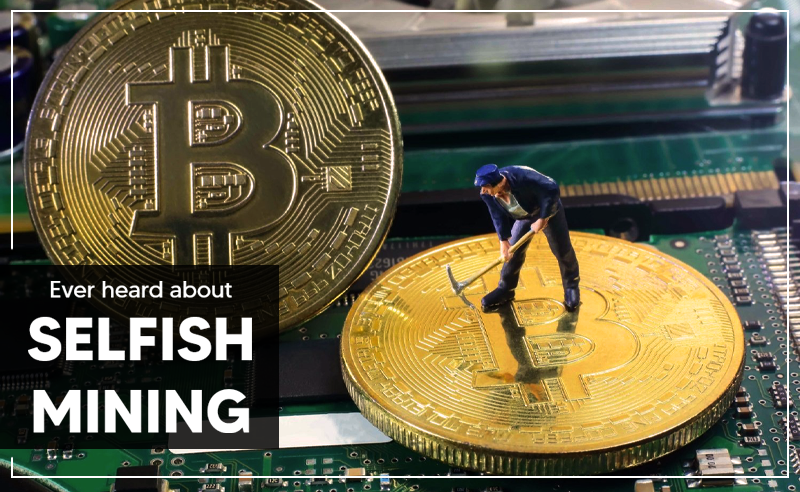 Ever Heard About Selfish Mining?

If you are abreast of crypto mining news, then you must have read a lot about Bitcoin mining. But today we will let you know about selfish mining. Now the word ‘selfish’ needs no introduction. It is a common trait that lies in most of the humans. But what makes this word attached to mining? It is indeed a curiosity that everyone wants to know. So let us begin our study about selfish mining in this article.

What Do You Know About Selfish Mining?

The term selfish mining can be defined as a technique for bitcoin mining. In this process, a group of miners co-operates together for enhancing their income via unlawful methods. If you know much about Bitcoin, then you must be aware of this fact that this cryptocurrency was created for money distribution and decentralized production. However, it can also bring focus on the functioning of bitcoin mining. The idea of selfish mining was developed by two experienced researchers in the year 2013. According to their proven research, miners can earn profit by gaining multiple bitcoins. It is possible by generating a distinct fork and concealing the blocks that are newly-generated from the key blockchain.

If you have been following Bitcoin mining news, then you will understand that mining of Bitcoin mainly depended upon the miners in generating coins. And this task is done when the complex mathematical puzzle is solved by them. Since this process is depended on many factors, so the revenue generated from the activity might differ. It may involve solving difficult puzzles, electricity costs, and the efficiency of internet linking.

According to the above assumption, the newly generated blocks by miners will surely be accessible on the public blockchain of Bitcoin. The following practice of selfish mining, however, fastens the process of discovery and breeds problems in mining infrastructure. The process even erodes the decentralized nature of Bitcoin. Selfish miners are smart enough to set the time of showing new blocks so that the genuine miners from public blockchain leave their own chain and get connected to the private chain.

Selfish mining is indeed a lucrative offer that breeds greed among the miners to earn as much profit. However, this process also leads to a problem in the infrastructure of mining and even erodes the Bitcoin’s decentralized nature. And also, note that it is an unlawful activity where miners can be punished and all their airy hopes of earning profit would be crushed with encoded information. Miners holding the blocks unlawfully would be penalized. So better don’t consider it to be a righteous activity, as greed always breeds the problem. If you are a budding crypto enthusiast who is looking for a crypto mining tutorial, then stay abreast of the crypto world.