GRT to Fall Below $1.78 – Technical Analysis

The Graph is an indexing protocol for querying data for networks like Ethereum and IPFS, powering many applications in both DeFi and the broader Web3 ecosystem. Anyone can build and publish open APIs, called subgraphs, that applications can query using GraphQL to retrieve blockchain data.

Past Trends in GRT 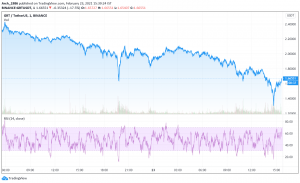 How GRT Looks Ahead

The RSI is currently at 54%. Half an hour back, it was below the 30% mark into the ‘oversold’ region. Thereafter, it rallied and reached the current level. Thus, buying pressures are slowly overtaking the GRT market. We can expect an intermittent price rise.

The A/D line is falling steeply. Thus, whale distribution is higher than accumulation. The OBV line is declining too. This means there is heavy offloading activity in the market.  Hence, selling pressures are high. Thus, the price is likely to fall further.

The ADX line was rising but has gradually started declining again. There is a bearish divergence. Thus, any price rise is just a price correction amidst a strong bearish trend. Thus, the price will start declining again.

The AO is positive and showing strong buy signals. The stochastic oscillator has just crossed the 80% mark and entered the ‘overbought’ region. This is a strong signal for swing traders to buy GRT. Thus, we can expect the price to go up.

Besides, the MACD and signal lines are positive. A bearish crossover by the MACD line over the signal line indicates that buying activity is slowly picking up. Thus, we can expect an intermittent price rise.