HNT Fell by 5.7% During the Last 24 Hours – Technical Analysis

HNT (Helium) is a cryptocurrency earned by Hotspots for validating and providing wireless coverage when devices connect on Hotspots. The People’s Network creates an entirely new wireless economy that flips the traditional telecom model of building wireless infrastructure on its head. Using a Burn-and-Mint Equilibrium token model, The People’s Network utilizes two units of exchange: HNT and Data Credits. 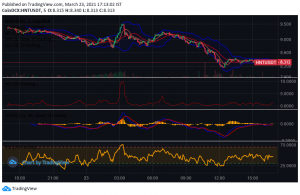 Currently, HNT is trading at $8.309. The price has declined from the opening price of $8.840. Thus, the market looks bearish.

The MACD and signal lines are in the negative territory. Moreover, a bearish crossover by the MACD line over the signal line has occurred. Thus, the overall market momentum is bearish, and we can expect a further price pullback.

Currently, the RSI indicator is at 80%. It has just rallied from the ‘oversold’ region. Thus, it is a good time for traders to lie low. The selling and buying both seem to be in a weak region. Hence, we can expect the price to fall further.

The A/D indicator has been decreasing in the past 24 hours. Thus, whale accumulation activity is quite low. Heavy buying will exert upward pressure on the HNT price. There is a positive divergence here. Hence, as expected the price is falling and giving an opportunity to the swing traders to find divergence and trade.