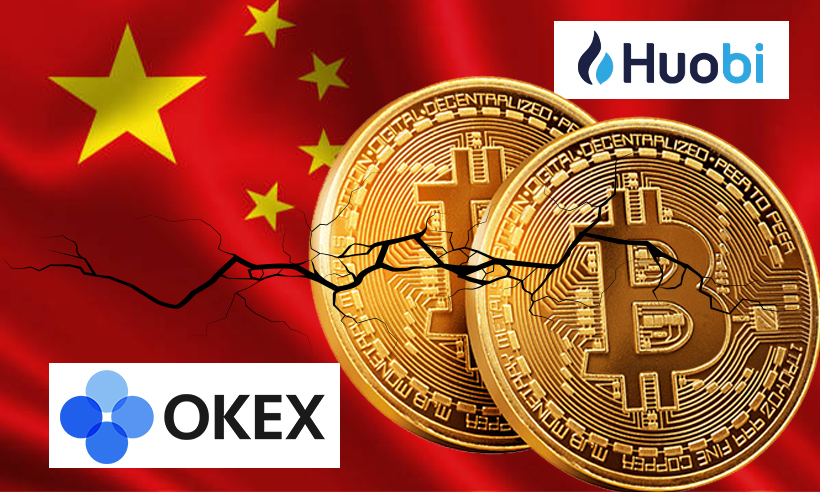 Huobi has restricted services for Chinese clients from selling crypto futures and using certain mining facilities, and OKEx has halted trading for its coin OKB in China.

Certain leveraged investment and mining pool products are temporarily unavailable to NEW users from a FEW specified countries and regions.

*Most users are unaffected

Only days after the Chinese government promised to impose restrictions on Bitcoin mining and trade, cryptocurrency exchanges Huobi and OKEx began restricting Chinese clients from accessing any of their services.

Huobi informed Decrypt that it has temporarily suspended crypto derivatives trading for “customers in some markets” to “protect the interests of investors,” citing “recent competitive developments in the market.”

Although the Huobi spokesperson did not directly state that Huobi has stopped derivatives trading in China, it is the only country where traders have reported restrictions.

Huobi Pool stated that it will stop providing services to Chinese users. Those who have already purchased Bitcoin mining machines will be removed from the shelves, a interesting thing is that Huobi said that FIL mining machines will not be affected. pic.twitter.com/B62PII7pmB

According to the spokesperson, Huobi Pool, the company’s mining pool operation, has restricted Chinese clients from purchasing and storing miners. It said that the restrictions are in place to “focus on the growth of our overseas presence.”

After the Chinese government prohibited cryptocurrency exchanges in 2017, both exchanges left the nation. However, they continue to have a strong Chinese client base, and their parent companies are still based in China.

The Problems of Cryptocurrency in China

The sanctions come on the heels of two major announcements from China this week, both of which sent the cryptocurrency industry into a tailspin.

Following the headline, which was commonly misreported as a new crypto ban, Bitcoin dropped to lows of around $31,600. The harm was exacerbated when the Chinese government announced on May 21 that it would crack down on Bitcoin mining and trading to “prevent and monitor financial risks.”

The announcement slashed Bitcoin’s price, which had since recovered to about $40,000, by another 12%.