Litecoin is a cryptocurrency that enables instant payments to anyone in the world and that can be efficiently mined with consumer-grade hardware. The opening price of LTC was $182.06 on February 11, 2021. As of February 17, 2021, LTC closed at $236.65. Thus, the LTC price has surged by approximately 30% in the past week.

Past Performance of Litecoin 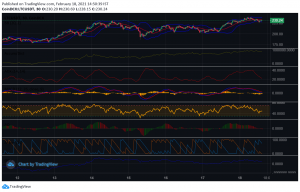 How LTC Looks Ahead

The price line is tapering towards the lower Bollinger band indicating high selling pressures. The price is also below the 20-day SMA. Thus, we can expect a price dip.

However, the A/D and OBV lines are rising indicating high buying activity. Thus, whale accumulation is higher than whale distribution. There is a bullish divergence. Thus, the price will start rising again.

For the past three hours, the MACD and signal lines were negative. But, now they are very close to the zero line and may change signs soon. A bullish crossover by the MACD line over the signal line is a healthy sign too. So, we can expect the bearish trend to reverse. The price may start rising again soon.

Presently, the RSI indicator is at 57%. It had fallen below the 30% mark a couple of hours back. Thereafter, it started rallying again. However, it is facing a bearish swing rejection at 60%. Thus, the buying pressures aren’t that strong yet. The price will struggle to rise for some time.

READ  Bullish Trend Continues After the Launch of Ethereum Futures

The AO indicator was negative for the past few hours. But, now it has gone above the zero line and become positive. ‘Buy’ signals are gaining strength. So, a trend reversal is on the horizon.

The Aroon indicator is also pointing towards a trend reversal. A bullish crossover by the Aroon up line over the Aroon down line indicates that the price will rise.

However, the ADX indicator has started falling again. This means that the price uptrend doesn’t have enough strength to sustain. So, we can expect a price pullback.