LTC Technical Analysis: On the Verge of Fall to $121

Last trading week in the LTC market ended quite unconvincingly for continued growth. Although the weekly candle closed above the opening price, buyers left a trail in the form of a pin up. Trading volumes last week were low. The main problem is that the price rebound from the range of $130-$140 for two weeks occurred at much lower volumes than the local wave of fall before. Given the fact that the LTC price fell this week and the complete passivity of buyers inspires a high probability of continuing to fall even with the update of the June low. 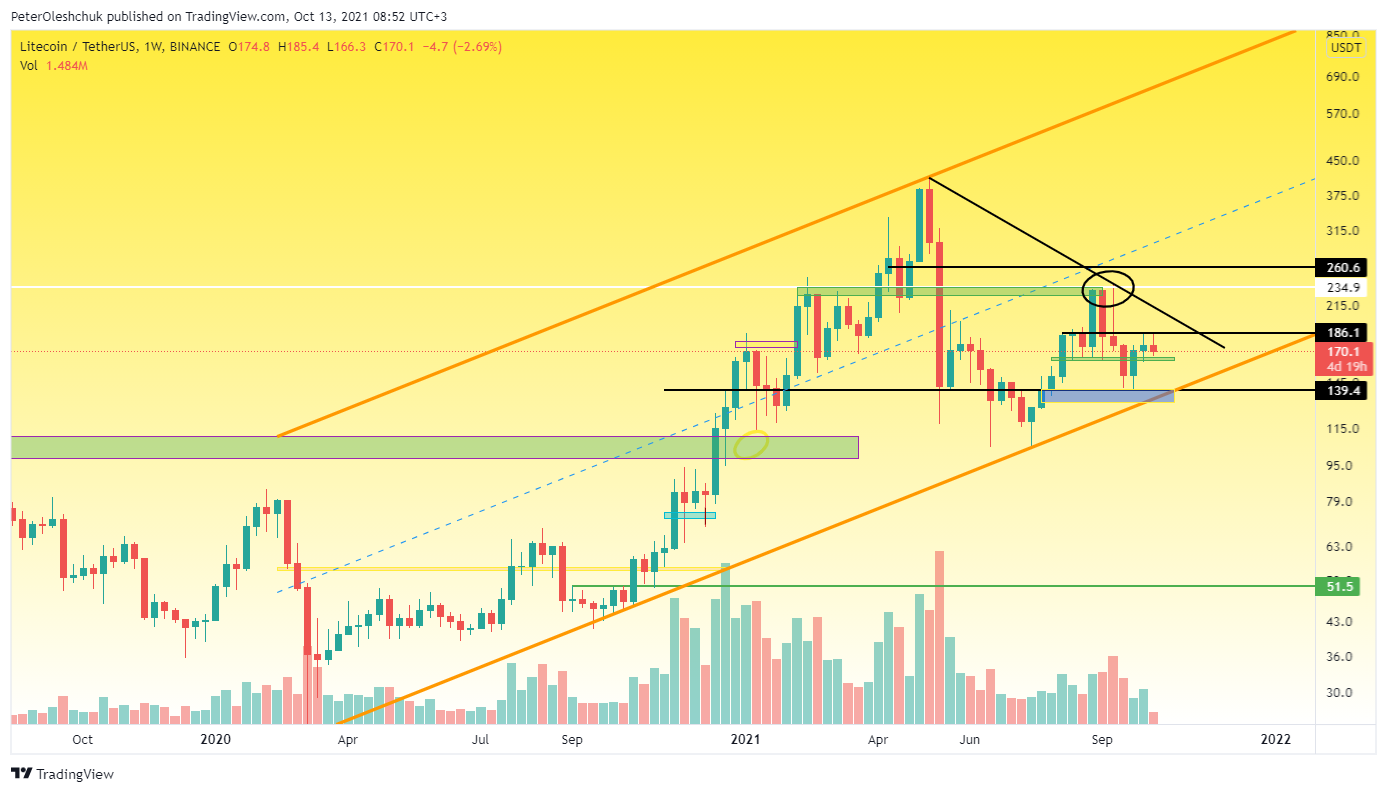 If you analyze with what dynamics the LTC price jumped from the range of $130-$140, the chances of re-keeping this range are quite low. It seems that buyers are not ready to continue the growth trend that they have organized in the orange growth channel. Therefore, the continuation of the fall with the first stop of $121 and the final $53 becomes a very real scenario.

The BTC market also has a significant influence. At the moment, the BTC price is near the historical highs and signals the beginning of the correction of the growth wave from July. In this case, the entire crypto market will turn red again for several months. Thus, October turns from a month of prospects and new opportunities to a month of survival of the cryptocurrency market.

Technical Analysis of LTC in the Daily Timeframe 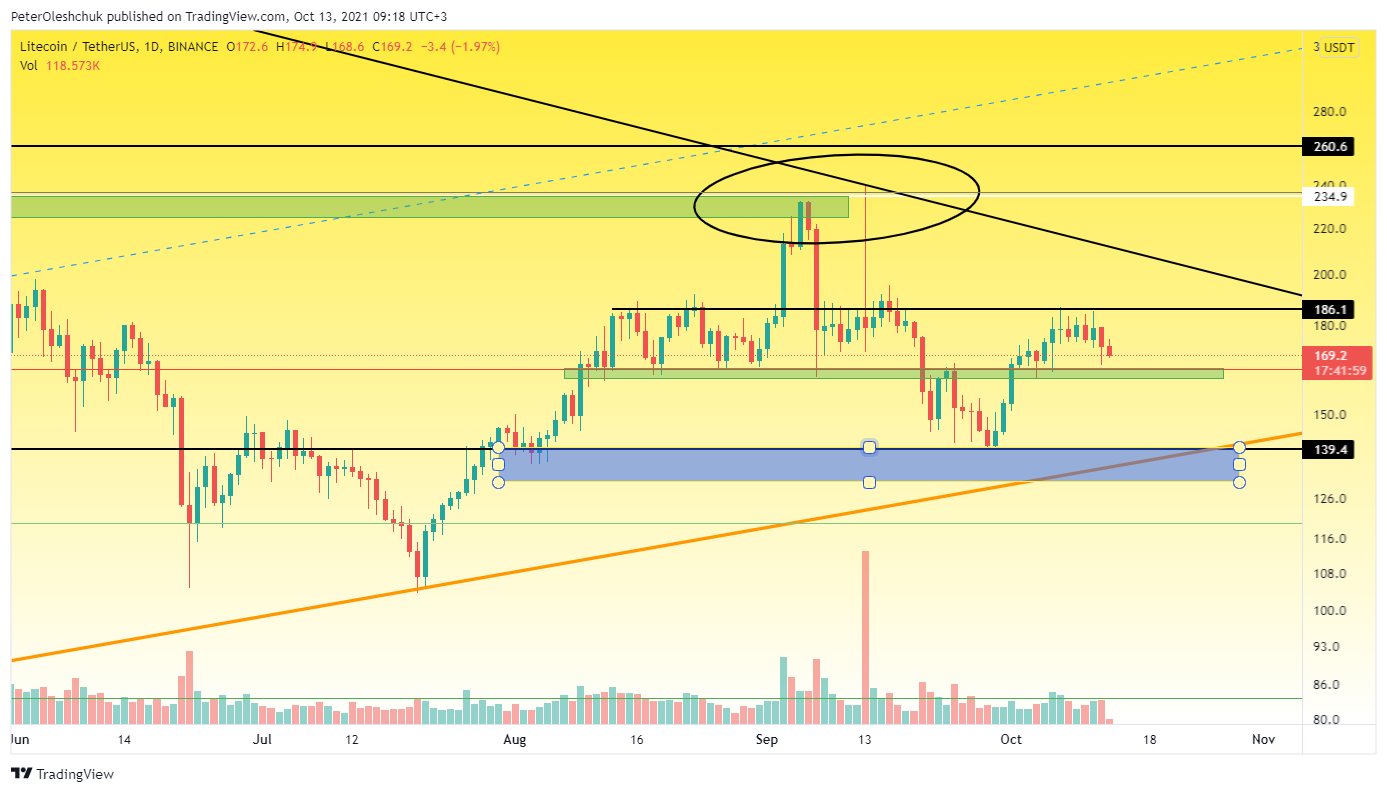 Analyzing the movement of the LTC price in the daily timeframe we see the chance to prevent the global correction in the market. To do this, it is important for buyers to keep the local range of $160-$165. This range is great for the role of supporting the growth trend that has begun. On 7 September, buyers withstood a strong blow from sellers and prevented a total collapse of the LTC market. Only after the consolidation trade sellers managed to push the price below this range.

Therefore, if buyers try to attack the range of $160-$165 without sufficient volume - buyers are likely to retain control of the range. In this case, the first target of buyers is in the $209 mark. This mark is the main trend line of sellers, which allows to keep the initiative. A fierce battle must take place near this mark, as a result of which the vector of price movements in the medium term will become clear.

The LTCBTC Price Is Testing Historical Lows at Low Volumes 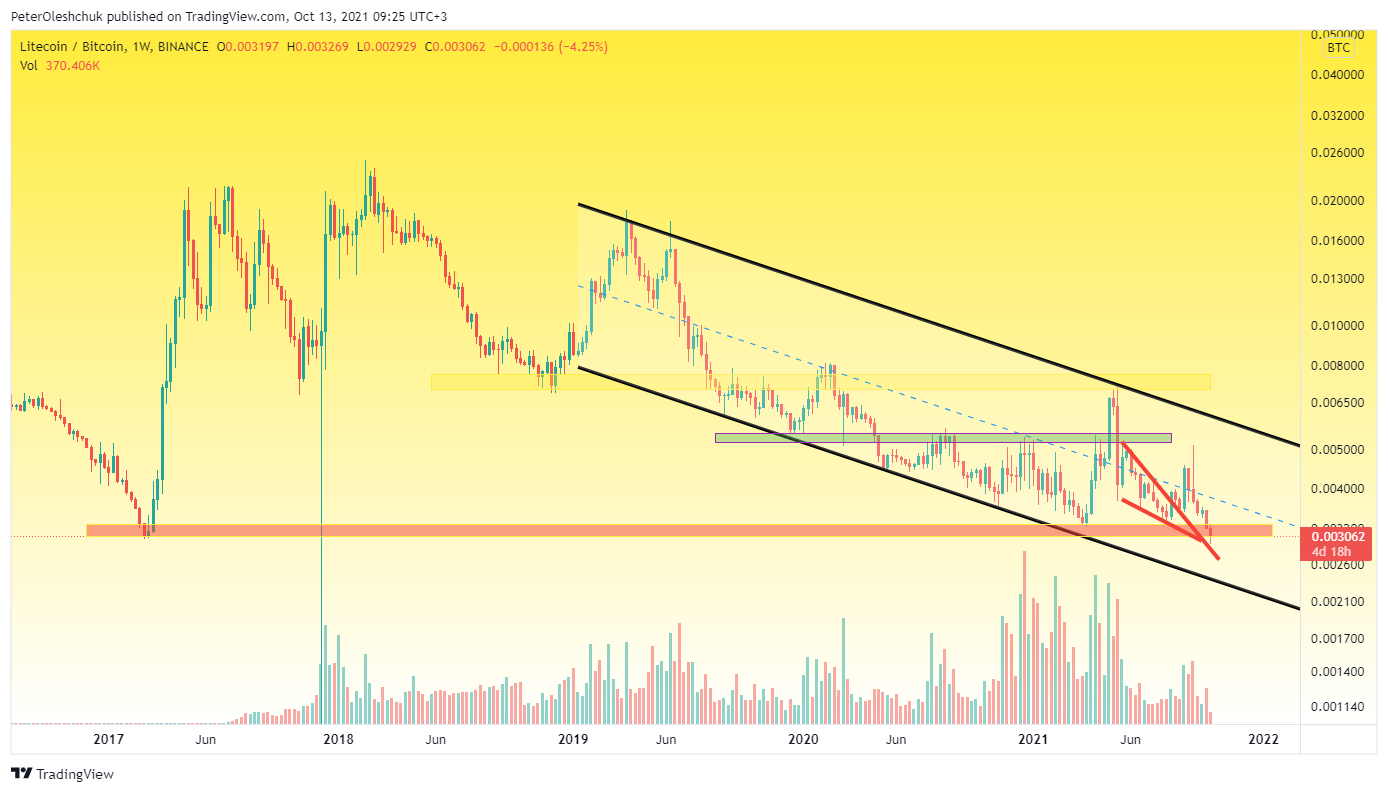 In the last two weeks in the LTCBTC market, sellers have managed to cross out all the achievements of buyers after the breakdown of the local wedge up. The LTCBTC price updated the local low is now in the range from which in March 2017 began its most powerful growth wave. At the moment, great interest from buyers is not noticeable. Nevertheless, until the LTCBTC price bounces up and is not fixed above the range of 0.003-0.0033, it is too early to talk about a positive mood of buyers.