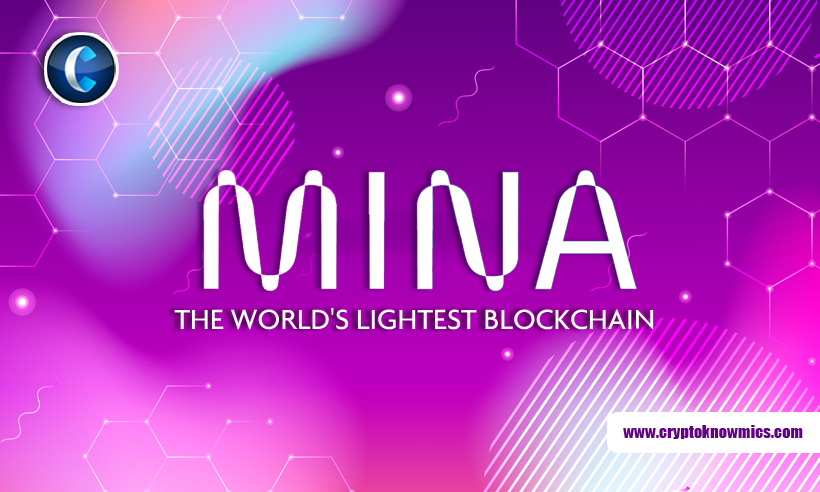 Another blockchain has been released, but this time in a special package. Mina launched on 23 March 2021 is a privacy-preserving blockchain. The project, earlier dubbed as Coda, is incubated by O(1) labs.

Mina is a fixed-sized blockchain of just 22 KB. This is in great contrast to the ever-increasing size of blockchains. According to Blockchair, Ethereum is over 218 GBs and Bitcoin is above 335 GBs.

At a phase when most blockchains are suffering from scalability issues, Mina uses a rather elegant solution. It is built on consistent-sized, cryptographic, recursive zero knowledge-Succinct Non-Interactive ARgument of Knowledge (zk-SNARK) proofs. It allows for quick sync in milliseconds and quick verification of blockchain. Anyone with a smartphone can easily participate in the blockchain. Gauntlet Network estimates the hardware cost for running a staking node to be around $100 per month.

This protocol offers payment functionality similar to Bitcoin with a faster verification time of 200ms.

Mina allows the creation of SNARK-powered dApps called Snapps by developers for which logic and data are computed off-chain and verified on-chain. This provides a great opportunity to scale and perform large computations efficiently at lower costs.

This blockchain introduces a unique feature to connect for private interaction with any website and access to real-world data on-chain in a secured manner. It does not share sensitive user data with any third party. Instead, it shares only verifiable proof of the data.

Mina has partnered with CoinList, a decentralized exchange, for its token sale. A total of 1 billion of its tokens will be in circulation.

This protocol is supported by a large community of social media, community, and testnet participants. It has 650+ genesis founding members on board for the launch of its mainnet.

How Can the Mina Blockchain Be So Small?

A zk-SNARKs function is a cryptographic technique that proves that a computation was performed correctly, without proving the entire computation. Ex. given the hash of a random number, the prover could convince the verifier that there indeed exists a number with this hash value, without revealing what it is. It does not require any interaction between the prover and the verifier. It also provides succinct zero-knowledge proofs that can be verified within a few milliseconds, with the proof-length of just a few hundred bytes even for large statements.

These prove the accuracy of a block’s transaction history, without showing all transactions. These SNARKs are chained together in a recursive composition, thus maintaining a constant size of the blockchain of ~22KBs. This includes a recursively composed zk-SNARK of size 1KB which provides the validity of the blockchain and Merkle root path of the current state of size around 20KB.

This dramatically reduces the amount of data each node has to store in order to maintain the entire history of transactions. Even as it scales to many users and accumulates years of data, its size remains constant.

For achieving consensus among its nodes, Mina employs the Ouroboros Samasika proof of stake algorithm. This is an improvement over the Ouroboros family of algorithms. The miners here are replaced by block producers who stake MINA, the native token of blockchain, to compete for getting a chance to create a new block. In return, they can earn block rewards, transaction fees, and network fees. The block reward will follow an inflation curve like Bitcoin rewards, reducing overtime.

Mina architecture also includes snark producers which help compress data by generating SNARK proofs of the transactions. They earn by selling these proofs to the block producers in return for a portion of the block rewards.

The forking would also be difficult on the blockchain as the block producers are selected ahead of an epoch which does not give them a chance for removing their stake and fork the chain.

According to an analysis by the security firm, Gauntlet Network, the Mina blockchain is resilient to 51% attack as the fall in token value would result in more losses to the attacker.

Before its mainnet launch, the Mina ledger application has undergone a security audit by Least Authority, a security consulting firm. It has also checked its blockchain integration for the Nano S/X hardware wallet. According to its report, the developer team at Mina has taken security considerations into account by reducing heap allocations and clearing privacy keys after use.

Currently, Mina focuses on the following use-cases to provide infrastructure for connection between the crypto and the real-world:

To achieve these goals, Mina created a programming language called Snarky for verifiable computation. The protocol, Ouroboros Samasika is also an in-house product to provide provable consensus. The revolutionary, recursive SNARK construction technology called Pickles is also created and used by Mina. Moreover, it is the first blockchain to create and use SNARK-powered dApps called Snapps.

Mina is created on the solid bedrock of some very interesting technologies like zero-knowledge proofs and the revised Ouroboros consensus. It proposes to delimit blockchains from their previous limitations of scalability, privacy, and centralization of miners. It also provides an important capability to its developers to connect to the off-blockchain world easily and securely. Overall it offers a lucrative package of a much-economic blockchain.

It is to be seen how much it is accepted and used by the community.