Whenever a certain global fundamental event occurs, it could also make relation with BTC price. For example, currency demonetization in 2016 that gave a positive effect on BTC. In India, the BTC price was traded at a 20% greater value than the rest of the world. Increased interest from institutional investors in May 2020 has also factored in the increased BTC market capitalization. Just yesterday, few tweets from BitMEX Research over the “double-spend” occurrence of Bitcoin brought the exuberance to $30,000 levels. “Double Spending” is the possibility of the same BTC being utilized by two parties, which theoretically would go against the ethos of cryptocurrency.

BTC has again crossed the psychologically important $31,800 mark during the trading activities of 22nd January 2021. It had earlier in the day tumbled to $30,000 searching for support after crossing 200 SMA (Simple Moving Average).

As per many new signals such as the Spent Output Profit Ratio (SOPR) developed by Glassnode, a correction is offering a chance to pick up more BTC. Any slide below $30,000 could test $28,000 levels and worst predictions also place the number to fall below $25,000, which it has safely averted today. 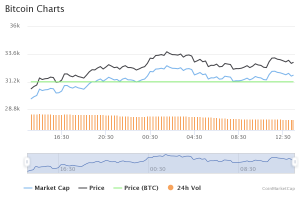 The last four hours trade has indicated a double-bottom pattern, which presents a bullish trend. This double bottom pattern is at $40,000 and is created as the price tested lowest points twice. It is important to note that this level will not be reached unless the SMA doesn’t cross 200. The Relative Strength Index (RSI) has moved above the oversold area. It is crossing the midline and will show a bullish trend.

READ  Bitcoin All Set to Deal With the U.S. Presidential Election

The SOPR is an interesting new insight to identify patterns for buying and selling in Bullish and bear markets. During a bull market, the market automatically corrects prices and brings SOPR below 1 (these are prices where people are selling with losses).