ADA Expected to Reach a 35% Price Hike Next week

ADA (Cardano) is trading at $0.35 levels on 30th January 2021. Today’s trades are between $0.34 and $3.3 from early morning and have fallen dramatically from last evening’s highs of $0.37. The price rose almost 6% during the 24 hour period and also jumped by more than  5% on Friday. The market capitalization has crossed $10.7 billion making it the 6th largest digital currency in the world.

The currency has been moving fast since the first week of January and is now forming an asymmetrical triangle. ADA price moved higher forming a pennant and staying on the upper side of it, but it needs to break the levels of $0.41 to confirm that trend.

ADA has been the talk of the cryptocurrency town on Discord and Reddit along with DOGECOIN. The creation of a pennant flag shows that the movement of prices will stay bullish.

Though it has been the talk of the town,  it is now in a range-bound trade and needs a strong breakout at $0.36. 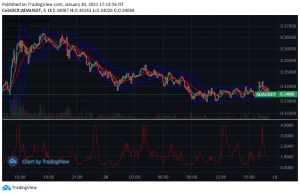 The parent company of ADA – IOHK has announced the launch of Plutus Playground – a testing environment for developers to create and test their smart contracts. The new Gougen phase set to be created will be a major boon for developers.

How Does the New Week Look

A very clear breakout of the triangle pattern can take the price shoot up by 30-35% in the coming week. The In/Out of the Money Around Price (IOMAP) trend shows the range-bound behavior between $0.32 to $0.36, which will be a tough barrier to break at 2 billion ADA volume. Going beyond this can push the prices to $0.4. The tough thing to maintain will be the trendline below $0.31, as this can take the price trend falling to $0.21 levels. If a supporting trendline emerges between $0.31 and $0.32, then the prices will be maintained.