As per recent news, the BRAVE blockchain network plans to replace its in-built wallet with a new Ethereum wallet on the upgraded version of its browser. The browser is expected to have a new decentralized exchange as well. These technology updates may positively impact the Basic Attention Token (BAT) price in the long run. 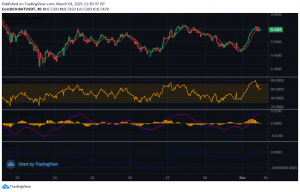 Technicals for the Day-Ahead and Tomorrow

Currently, BAT is trading at $0.54. There has been a slight rise from the opening price of $0.53. The price has been trading above the SMA line since morning. Thus, the market looks bullish.

The OBV indicator is rising. Thus, buying volumes are high. Hence, we can expect the price to rise further.

The MACD and signal lines have turned negative. Thus, the market momentum has turned bearish. However, a bullish crossover by the MACD line over the signal line indicates that a price pullback may be just temporary. Both the lines are still closer to the zero line and may become positive again.

The RSI indicator is at 51%. A few minutes back, it faced a bullish swing rejection at 40%. Thereafter, it rallied to the current level. Thus, buying activity is high. High demand for BAT will push its price upwards.

Currently, the price is above the Fibonacci pivot point of $0.52. It is inching closer to the first Fibonacci pivot resistance level of $0.55. It is expected to break out of it in some time.

The price has already tested the 38.2% and 23.6% FIB retracement levels of $0.52 and $0.54 respectively and broken out of them. Thus, we can expect the bull-run to continue today and tomorrow. However, intermittent price corrections cannot be ruled out.