Apart from the fact that Bitcoin prices are doing all-time-high, the energy used to harvest it is also soaring high. According to an analysis published by the Cambridge University, the annual carbon footprint of mining Bitcoin is equivalent to or more than the countries like Argentina and Norway.

The Energy Required in Bitcoin Mining

Mining crypto is an energy-intensive process. It uses leading-edge electrical hardware to solve complicated mathematical algorithms that verify transactions. The whole process results in a reward of Bitcoin. The more technically sound hardware is the probability to solve algorithms increases, resulting in faster Bitcoin extraction. 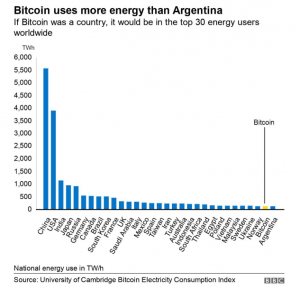 According to the report, as a new mining network added to the network, it leads to an increase in the overall electricity consumption by the hardware. Bitcoin mining consumes approximately 129.09 terawatt-hours (TWh) per year. The difficulty of mining measures the process of cryptocurrency mining. In essence, the difficulty of mining a block never remains the same. Higher difficulty means the increase in difficulty to find the hash of the block. According to the report:

"Rising bitcoin prices make mining more attractive, as the potential reward increases in value. As a result, new mining hardware will get added to the network and lead to increased electricity consumption overall."

The difficulty of mining BTC is always in proportion with the competition that participates in BTC mining. More Bitcoin mined implies more energy consumption. With the increase in machines miners operate, the chances of finding the solution to the puzzle also increase. With the increase in no. of machines, more electricity is needed to operate and cool the hardware resulting in higher carbon production. The report says,

"The more machines a miner operates, the more likely he is to find the solution to the puzzle. However, more machines also mean that more electricity is needed to run and cool the equipment, which in turn results in higher costs for the miner in question,"
#BTC mining#Cambridge Bitcoin Electricity Consumption Index#carbon footprint#BTC Mining Machines